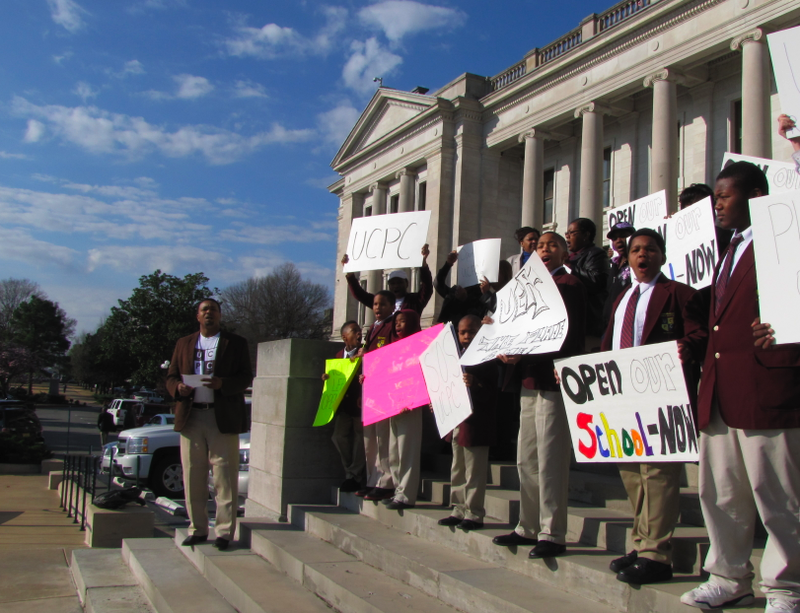 Parents and students from the shuttered Little Rock Urban Collegiate Public Charter School for Young Men rally at the State Capitol Wednesday in a bid to get the facility to reopen.

LITTLE ROCK — Parents and students from a Little Rock charter school ordered closed immediately by the Arkansas Board of Education are rallying outside the State Capitol in a push to get the facility reopened.

Little Rock Urban Collegiate Public Charter School for Young Men was shut down Monday by the board, which cited budget problems that had the 262-pupil school on track to have a deficit of more than $250,000 by the close of its first year.

Shirley Bruce, the mother of a fourth grader who went to the school, was one of about 75 parents and children who gathered on the steps of the capitol Wednesday, displaying signs, passing out literature and chanting "save our school."

"The unfairness is other newly established charter schools who have suffered a financial shortage in their initial year have been allowed to continue," said Bruce, who helped organize the demonstration. "The other schools retained the funds they needed. This school was not allowed to do that."

Bruce said the sudden closure was "devastating" on the students and would lead to academic problems as they transition midyear into other facilities if Urban Collegiate doesn't reopen.

The school, located at Markham and South Hughes streets in Little Rock, was the first independently run charter school to close immediately in the middle of the school year.

The parents and students are expected to rally at the capitol again Thursday.