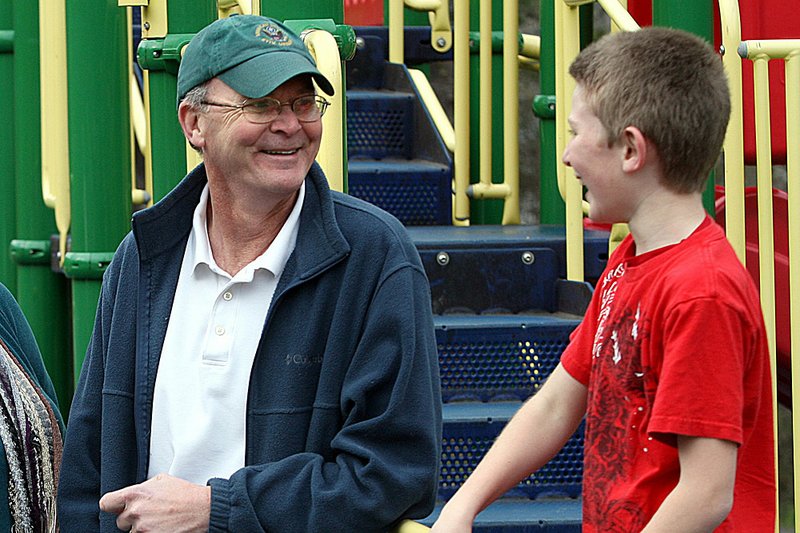 Phil Griffey and his son, Sam, hang out at a Maumelle park. Griffey, who uses a cane and sometimes an electric scooter because he has multiple sclerosis, attends most of his children’s sporting events.

LITTLE ROCK — Raising a family is challenging enough, but imagine the daunting prospect of doing it when one of the parents struggles with a debilitating condition.

When a disease leaves a mother too tired to take her daughter to the park, or a father unable to play catch. Or when making dinner is a task too cumbersome some nights.

But there is a way to successfully navigate the ever-changing terrain of a chronic disease, experts say, and it involves a healthy dose of communication, early and often. It also means teamwork and planning ahead, but being flexible enough to adjust when things go awry. In essence, it is just like any family, but with an added degree of difficulty.

Phil Griffey of Maumelle knows all too well the small heartbreak of having to tell his children no, not because of anything they did wrong, but because “daddy is sick and can’t.”

Similarly, Debbie Ray of North Little Rock has times when she isn’t able to be the mother she wants to be for her toddler, Addison. On those rough days, she relies on her husband, James, to make meals and give Addison her bath.

Griffey was diagnosed in late 2000 with relapsing remitting multiple sclerosis, a form of the disease characterized by periods when new symptoms can appear and old ones resurface or worsen, followed by periods of remission, with full or partial recovery from those symptoms.

His daughter, Melanie, is now 15 and can remember a time in her life when her dad was healthy, able to walk on the beach and play in the sand with her. For her 11-year-old brother,Sam, though, dad has almost always used a cane.

“It is difficult for me that I am not as much of a provider for my family,” Griffey said. “That I can’t give financially, emotionally, physically.”

Griffey left his job of 20 years last May because the fatigue and debilitating nature of multiple sclerosis had become too much. He’s now a stay-at-home dad, carting his children to and from school at Central Arkansas Christian, while his wife works at Arkansas Children’s Hospital. He tries to remain as much a part of his children’s lives as possible, even as his mobility decreases.

It’s a life he’s been preparing for since his diagnosis, but it doesn’t mean it’s been easy, particularly because the busy household includes two sports-oriented children.

Jessica Fisher, a licensed social worker and programs director for the National Multiple Sclerosis Society in Little Rock, says everyday life can be an uphill battle, particularly with diseases such as multiple sclerosis or Parkinson’s that can throw patients for a loop daily, or diabetes, which has to be closely monitored.

“The biggest challenge ... is probably the unpredictability of the disease. [With multiple sclerosis] symptoms may come and go. Relapses and periods of feeling great have been described as maddening,” Fisher said. “This can be hard to explain to children who don’t understand the ups and downs of a chronic disease.”

The same holds true for other chronic diseases or even cancer. Children may not be able to grasp the magnitude and complexity of the illness, but they can process in small pieces what a parent is going through day to day - feeling tired, needing to rest or running a fever.

Griffey may be the one with a disease, but everyone in the close-knit family is affected. Multiple sclerosis has chipped away at his independence, leading to more responsibilities shared among family members.

First, it was the cane. Then three years after that, Griffey stopped going places save for his kids’ activities. Then he had to stop attending his son’s football games because the walk from the car to the stands was too much.

“Other dads, they are out coaching their kids’ teams, shooting baskets in the driveway,” Griffey said. “I’m not angry. It’s just frustrating.

“And humbling,” he added.

Sam came to him one day begging to toss a baseball around with him. When Griffey demurred, Sam insisted he had the perfect plan. He dragged a folding chair out to the driveway, and father and son played catch that afternoon.

Along with adjustments to activities, Griffey said, there are concessions that have to be made.

For Ray, 39, those trade offs include scaling back an always-on-the-go lifestyle while keeping her job, and letting her husband pick up the slack. And there’s lots of microwaving, which probably is a truism in most busy households.

Or, as she puts it: “Thank God for Gerber meals.”

Ray also has multiple sclerosis, an autoimmune disease that affects the central nervous system and can manifest in several ways, including trouble with balance, walking, vision, coordination and muscle weakness.

She suffers from severe fatigue and vertigo.

Additionally, she has trouble with temperatures, so she can’t judge how hot bathwater or a bottle is for Addison.

Teamwork becomes all the more important when raising children. In a child’s early years especially, routines are paramount. That was a hard lesson for Ray, who experienced an exacerbation of symptoms and a slew of stress-inducing events shortly after giving birth to Addison, now 19 months.

“Early on, it was difficult. We weren’t getting much sleep,” said Ray, who wound up needing to focus more on taking care of herself than Addison those first weeks.

“I was in such a fog,” she admits. “But we plugged through. Now, we are enjoying her so much. I’ve come to realize that the disease comes secondary to raising a family.”

A chronic disease might even play a role in deciding to start a family. Ray knew it wasn’t a decision to be made lightly. She had to stop treatment before getting pregnant, opening herself up to the possibility of having a relapse. She said she had to get over the fear of the “what-ifs” before having children - what if I wind up in a wheelchair? What if I can’t be the parent I need to be?

But as Griffey can attest, you come to grips with reality, and “do the best that you can with what you have.”

And that means relying on family members - all of them - to pitch in.

According to Fisher, it is important for the family to have an outlined plan of who is responsible for what each day. However, she said, it is also important for the person with the disease to fulfill whatever parental and labor duties they are comfortable with when they are feeling well.

Griffey can do about half a day’s worth of work before exhaustion hits. He can’t carry a load of laundry, do yard work or pick anything up off the floor, but he does what he can, cleaning the kitchen and cooking.

His children take out the trash, among other chores. He and his son have turned yard work into a game. His wife, Patti, goes the extra mile to help as well.

“A preschool or school age child can be empowered and feel part of the solution by completing simple tasks for their parent,” Fisher said. “Retrieving items, getting the parent a snack or helping with simple household chores are reasonable expectations. Older children and teenagers can take care of younger siblings, accompany parents to doctor appointments, cook and clean.It is important to maintain balance by facilitating opportunities that will allow your child to continue to be a child.”

Even with a routine in place, inevitably stress and the disease will take its toll on a family. For Ray, she is hoping that Addison will come to see her mommy’s disease as second nature and not a monster to fear. Ray plans to talk about multiple sclerosis in stages and not hide any part of it from her, including the medication she takes by injection. Griffey’s daughter even helped him with his shots for a while.

“It can be even scarier for a child if the disease is hidden,” Fisher agrees. “Parents should explain what the medicine does to help, even if it may look like it hurts.”

For Griffey, the emotional adjustment has been tough at times, particularly for Sam, who has struggled with his dad’s limitations.

“Embarrassment is a common emotion for teenagers to feel when they have a parent who is ‘different’ from their peers’ parents,” Fisher said. “It may be helpful for the parent’s spouse or another designated adult to talk to other parents in the teenager’s circle and offer to talk with the child’s friends about the disease.”

“The challenges they endure and conquer together create a bond that is not easily broken. Children often reach maturity sooner and gain life skills and experiences that foster individual growth that they might not have gained otherwise,” she said.

Griffey said his disease has taught his children tolerance and compassion.

“Most families don’t have to worry about getting dad’s electric scooter out of the trunk,” he said. And when his family goes somewhere together, his two children fight over who will get the honor.

For Ray, the emotional calibrations have helped her put things in perspective.

“Priorities change,” she said. “But we do many of the same things we did before, just maybe not as much.”

Most of all, staying positive goes a long way when confronted with a disease.

“We all have challenges, but those don’t define a person,” Griffey said.

Nor do they a family.