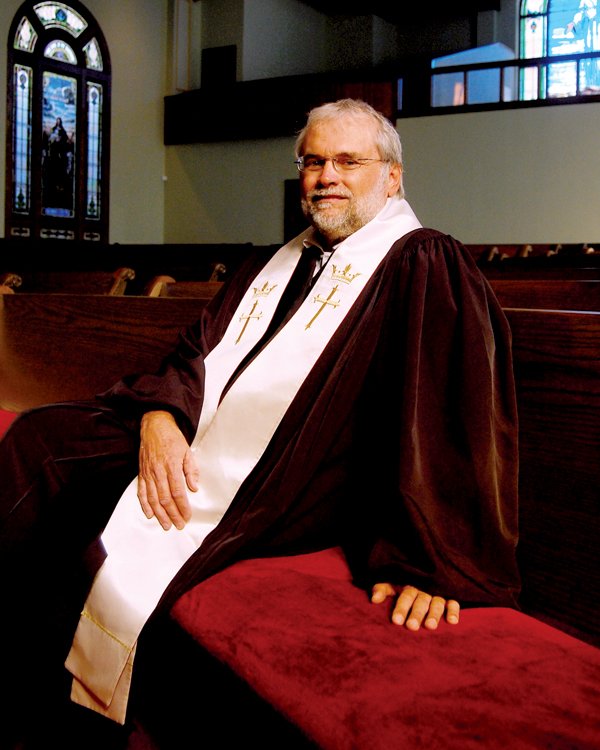 The Rev. LaVon Post, who has been a Methodist minister for 34 years, overcame the odds and climbed back on a bicycle after he recovered from being struck by a vehicle while riding his bike in November 2008.

TRI-LAKES AREA — Folks who know the Rev. LaVon Post most likely know his “Dr. Pepper can” story. Many years ago, he used the soft drink to teach his daughter, Amber, to ride a bicycle, placing a can on the ground as a marker for her to try to reach.

“I said, ‘Amber, just forget about trying to ride your bike today. Just try to go past that Dr. Pepper can,’” Post recalled. “Very soon, by moving the Dr. Pepper can, which showed her progress, she learned to ride her bike.”

More than 20 years later, Post uses the story as a metaphor for making progress. He keeps a steady supply of the soda in his church office, ready to hand out a can to whomever might need a little encouragement.

The minister at First United Methodist Church of Malvern, Post was born and raised in El Dorado. He was just 17 years old when he decided to become a minister.

“We had a speaker at church ask if anyone felt they were being led to be into full-time Christian ministry, and I did,” he said.

He has been a Methodist minister for 34 years and has served in about nine churches throughout the state. He landed in Malvern in the summer of 2009.

“He’s made a huge impact on our community,” said Dr. Shawn Purifoy, a member of First United Methodist. “Everyone that comes into contact with LaVon walks away with a positive impression. He’s always positive, he’s always upbeat, and he’s very genuine. Everywhere he’s been as a Methodist minister in the state of Arkansas, he’s made an impact.”

While living in DeWitt 13 years ago, Post and a few others started the first Harvest of Hope, which raises money for the Arkansas Rice Depot through the sale of smoked pork roasts and chicken.

He brought the event to Batesville about seven years ago and to Malvern last year. Malvern’s inaugural Harvest of Hope raised $15,000, which provided food to children in need in Hot Spring County through the Rice Depot’s Food for Kids program.

Since moving to Malvern, Post has also started the Malvern Bike Club, which comprises about 18 members from his church and the community. He got into road biking four or five years ago, and last month, he rode 60 miles in celebration of his 60th birthday — a feat, which, just a few years ago, would have seemed impossible.

Before transferring to Malvern, Post was living and working in his hometown of El Dorado. It was there in November 2008 that while riding his bicycle, he had a collision with a vehicle and nearly died.

With broken ribs, a fractured vertebra and a

punctured lung, he was transferred to Baptist Medical Center in Little Rock, where doctors induced a coma.

“There for about four days, I nearly died,” Post said. “Of course, I don’t remember any of it.”

He remained at the hospital almost seven weeks, going from the intensive-care unit to the step-down unit and, finally, to rehabilitation.

While lying in bed, unable to walk or use his arm, he received a photo from his daughter of a Dr. Pepper can, encouraging him to focus on his progress.

“First I was able to stand up and take two steps, and then lift my arm higher than my chest, and I remember making progress when I could feed myself and brush my teeth and shave and do those things I’d taken for granted my whole life — now they were huge Dr. Pepper cans,” he said.

While still in the hospital, an anonymous person arranged to have a bicycle ready for Post when he got out, and in late February 2009, three months after the accident, he took the bicycle out to a protected bike trail for a spin.

“It was hilarious because there were these three city workers there, and I get on this bike, and it was a gorgeous road bike, and I rode it just as slow as you can make it because I was scared,” he said, with a laugh.

“I was grinning one moment, but then if I heard something, like a squirrel in the park or a car, I’d jump and freeze up. I was barely riding enough to keep the balance, and I rode a half mile, and these workers probably thought, ‘This guy is an idiot.’”

Post continued to ride, though, increasing both his distance and his confidence, and about a year ago, he started thinking about trying to ride 60 miles for his 60th birthday.

“I ran this by Amber, my daughter — she and her husband both are cyclists — and she said, ‘Daddy, you can do this,’” Post said.

The ride was originally scheduled for February, which is his birthday month, but it was postponed because of the snow and rescheduled for April 16. Post was joined by his daughter and her husband, as well as friends from around the state and members of the bike club.

“The reason I did that was to let Satan know, ‘You didn’t win this battle, pal. My father won this one,’” Post said. “Today, I can’t believe how good God has been to me. I’m alive, and that was questionable. I can walk, I can be a pastor to this church that I love, and I can move a Dr. Pepper can.”