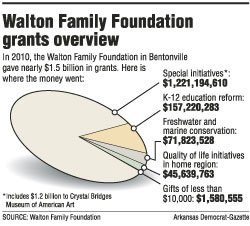 BENTONVILLE — In 1987, Wal-Mart Stores Inc. founder Sam Walton started his family foundation with $1,000 and a commitment to making life better for individuals and communities alike.

Almost a quarter-century later, the Walton Family Foundation has grown to be the state’s largest private foundation and is among the 25 foundations with the most assets in the United States, supporting initiatives that range from charter schools in Los Angeles to fisheries on Cape Cod in Massachusetts.

But the Crystal Bridges Museum of American Art, scheduled to open Nov. 11 in Bentonville, ranks as the largest philanthropic project that the Walton money has started from scratch.

The foundation is the primary benefactor for the sprawling downtown museum complex, which will display a collection of art assembled by Alice Walton, daughter of the late Sam Walton.

In the six years since she and the Bentonville-based foundation announced plans for the museum, the foundation has poured $1.3 billion into the Crystal Bridges project.

In a statement associated with the May museum announcement, Alice Walton said, “By investing in the endowment of Crystal Bridges Museum of American Art, my family has laid a foundation on which this institution can continue to grow as a resource for our community, state and nation.”

The foundation became the primary vehicle for giving for Sam and Helen Walton and their children: Alice, John, Jim and Rob.

Helen Walton died in 2007 and John Walton in 2005. The three surviving children and John Walton’s widow, Christy Walton, are among the 10 richest people in the U.S., according to Forbes magazine. Their combined assets came to $87 billion in a list of the 400 richest Americans the magazine released Sept. 21.

When he died in 1992, Sam Walton left the foundation $172 million through a trust. The family foundation has grown through the years and held $2.27 billion in assets as of Dec. 31, 2009, according to the Foundation Center, a New York organization that tracks foundations.

According to its website, waltonfamilyfoundation.org, the foundation made a total of $1.49 billion in grants to domestic and international projects in 2010.

The total includes $1.2 billion for Crystal Bridges, which falls into the foundation’s “special initiatives” area of giving.

In addition to “special initiatives,” the 2010 grants fall into the foundation’s three main focus areas: kindergarten through 12th-grade education reform, freshwater and marine conservation, and quality of life initiatives in the “home region.”

The region spreads from Northwest Arkansas to the rest of the state then the Mississippi Delta.

The foundation makes a host of grants each year that fall into a category described as “special initiatives.”

The Crystal Bridges museum is a special initiative. So is the Walton Family Charitable Support Foundation, a separate entity established by the Waltons that focuses more narrowly on colleges and universities in Arkansas and community foundations and trusts in Arkansas and surrounding states.

The charitable support foundation is notable for two historic gifts made to the University of Arkansas at Fayetteville, the state’s largest and oldest public university.

In 2002, it made a $300 million gift that still is the single largest gift made to an American public university and the fifth-largest to any university, public or private.

In 1998, the charitable support foundation gave $50 million to the university’s business college that led to the naming of what is now the Sam M. Walton College of Business. At the time, it was the largest single gift made to a business school.

“I think a lot of what has happened over the years, the good things that [have] happened at the university, has been a direct result of them making investments in the university,” Gearhart said.

“There’s no question in my mind that our growth, our prestige, our ability to attract superb students, our outreach programs, the significant gains we have made across the board, is really directly attributable to their philanthropy,” he said.

The foundation says on its website it is the nation’s “largest donor to initiatives that support parental choice and competition within education.”

The foundation has given more than $1 billion to education reform efforts, most notably to groups that push for private school vouchers and charter school programs.

“The foundation invests to expand the right of all parents to have access to quality schools, regardless of type, with the goal of ultimately increasing student achievement,” according to its website.

In 2010, the foundation made $157 million in grants in three education reform areas: shaping public policy, creating quality schools, and improving existing schools. That figure was up from $134 million in 2009.

Scott Smith, executive director of the Arkansas Public School Resource Center, said the foundation demands accountability and transparency from its grantees, which he likes.

The resource center received a three-year, $4.5 million grant from the foundation when it was founded in Little Rock in 2008. It is designed to assist charter schools and traditional public school districts in rural communities.

The state has 19 open-enrollment charter schools run by nonprofit organizations and 12 conversion, or school district-operated, charter schools, according to the Arkansas Department of Education.

Kathy Smith, a senior program officer for the foundation’s home region, is responsible for its Arkansas kindergarten through 12th-grade education reform initiatives. She said the foundation, often associated only with charter schools and school-voucher programs, is just as interested in improving traditional schools.

“Ramping up these efforts to help those kids achieve is going to help the district as a whole, the region as a whole, and the state as a whole,” said Smith, who is not related to Scott Smith. “These are considered investments.”

In 2010, the foundation gave $45.6 million in grants to organizations in Arkansas and the Mississippi Delta.

It gave almost $15 million to Arkadelphia-based Southern Bancorp, the largest rural development bank in the country, which has joined with community leaders to fund long-term projects that they hope will revitalize the city of Helena-West Helena and Phillips County.

One of the projects is a business retention and expansion program in Phillips County, said Ryan Hale, a program officer for the home region who is responsible for Northwest Arkansas and Delta initiatives.

Rob Brothers, director of the foundation’s home region focus area, said these projects may take as long as 15 to 20 years to create significant change in the area.

“The needs of the Delta are clear,” Brothers said. “Some of the Delta counties are among the poorest counties in the nation. These are not quick fixes.”

The foundation gave $24.8 million in 2010 to organizations in the state’s northwest corner, with grant amounts ranging from nearly $5.4 million for Camp War Eagle — a Christian sports and recreation camp for children founded by Alice Walton — to $50,000 or less for several non-profits.

In 2010, the foundation gave nearly $72 million to environmental efforts, with the stated goal “to benefit both people and wildlife by aligning economic and conservation interests,” according to the foundation’s website.

The top grantees in 2010 in the environmental focus area were:

m $18.6 million to Conservation International, an organization based in Arlington, Va., that believes people need nature in order to thrive.

Rob Walton, Wal-Mart’s chairman of the board, serves as chairman of Conservation International’s executive committee.

m $9.3 million for the Nature Conservancy, a preservation group also based in Arlington

m About $7 million to the New York-based Environmental Defense Fund, which works with Wal-Mart on its environmental efforts

Peter Seligmann, chief executive for Conservation International, said the foundation shares his group’s view “that the conservation of nature’s essential services is in every person’s enlightened self-interest.”

Seligmann said Rob Walton “has reached out to countless business leaders about engaging in sustainability and redefining how business works, from energy savings to supply chain.”

“I am proud to count the Walton Family Foundation among Conservation International’s strongest supporters,” Seligmann said. “I am enormously grateful for the family’s leadership and forward thinking on issues that are so critical for humankind.”

This article was previously published in the Arkansas Democrat-Gazette on Sept. 25, 2011.