Plans for 3 at-risk schools shot down 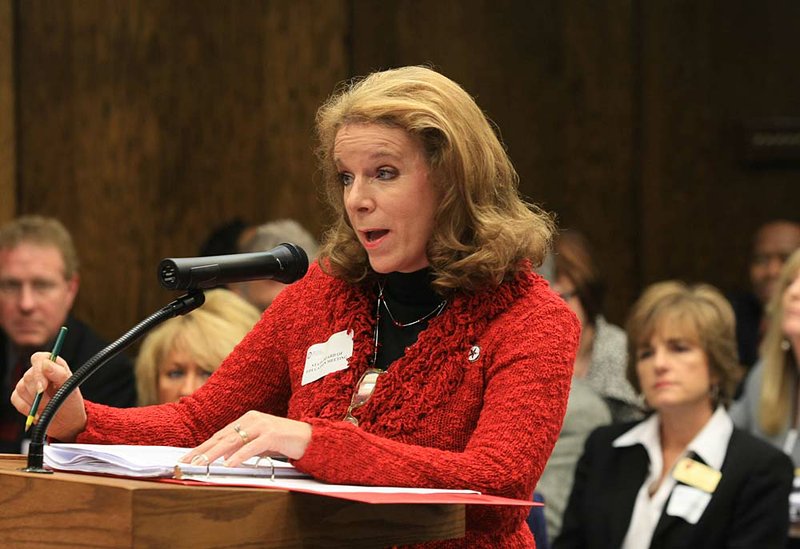 LITTLE ROCK — The Arkansas Board of Education on Tuesday rejected proposals for open-enrollment charter high schools in Texarkana, Jonesboro and West Memphis, assuring that no more than one new school will be approved in a year in which lawmakers had relaxed the long-standing cap of 24 charters statewide.

The Education Board voted 4-3 against the proposed Premier High School of Texarkana, a plan proposed by an established charter-school organization in Texas, and 6-0 against both the Diploma School of Jonesboro and the Diploma School of West Memphis. All three proposals were to target high school students at risk of dropping out or who have already dropped out.

The action came on the heels of the board’s vote Monday against the KidSmart Bilingual Public Charter School, an elementary school proposed for southwest Little Rock, and a vote to delay until January a decision on the proposed Special Training in Remedial Instruction and Vocational Education (STRIVE) Institute of Technology in Marianna.

The state Education Board has issued to date 17 charters to nonprofit organizations for the taxpayer-supported, independently run schools. That number won’t grow to more than 18 in the 2012-13 school year, depending on the final vote on the proposed Marianna school.

Earlier this year the Legislature passed Act 987, which removed the hard cap on the charter number. The law states that once the number of state-issued charters is within two of the charter cap — be it the current 24 or another number — the cap automatically increases by five.

Organizations initially responded enthusiastically to the change in law. Fourteen organizations in June sent the state letters of intent to apply for charters for 37 schools. But only five organizations followed up by actually submitting applications for seven schools in August. Since then, organizers withdrew plans for two of the seven, leaving just five proposals for Education Board consideration.

This is the first year that the Education Board relied in part on written, nonbinding recommendations from the state Department of Education’s in-house Charter Review Council. The council supported only the proposed Premier High School in Texarkana, and that application met all 20 standards for establishing a charter campus.

“We learned a little bit more about what we need to do in our review council and about getting some additional information,” state Education Commissioner Tom Kimbrell said about the process after Tuesday’s meeting. “We learned a lot about the kinds of information we need when we look at these dropout schools. Can we get some data to ensure that the board is looking at apples-to-apples? We’ve learned a lot.”

The Premier High School was proposed by Responsive Education Solutions, an organization based in Lewisville, Texas. The organization operates 54 charter-school campuses in that state with a total enrollment of 6,579 students. The school plan for Texarkana called for serving up to 200 students in grades nine through 12 in a building at 210 North State Line Ave.

Charles Cook, the company’s chief executive officer, told the Arkansas board that the Responsive Education high schools successfully serve a high percentage of students who have been unsuccessful in traditional schools by keeping the schools and the teacher-to-student ratios small. The ratios are about 1 teacher for 25 to 30 students as compared with one teacher for as many as 150 students in a traditional high school. An educational program is developed for each student based on a diagnosis of their academic needs and learning styles. Project-based learning is used in the curriculum.

“We are here to provide hope and opportunity,” he said.

In response to board questions, Cook said his 13-yearold organization was initially approached by a Texarkana pastor interested in providing educational options to students in the city. He also noted Arkansas High School’s long history on the state’s list of academically troubled schools — now eight years — because of low test scores for one or more subgroups of students. He also said Arkansas High’s dropout rate of 5.7 percent was 128 percent higher than the 2.5 percent Arkansas average.

Gary Ritter, professor of education policy at the University of Arkansas at Fayetteville, said Arkansas High in Texarkana ranked 239 out of 252 in the state in terms of graduation rates. Ritter also said the Responsive Education schools in Texas as a group outperformed the Texarkana schools using the National Assessment of Educational Progress, a national exam given to a random sample of students in all 50 states as the basis for the calculation.

Robin Stover, principal of Arkansas High, and Matt Coleman, the school’s instructional facilitator, and other faculty members described for the state board the school’s efforts to improve student behavior and achievement and raise the graduation rate in the wake of a critical state scholastic audit five years ago. Counselor Marilyn French said 248 of 252 seniors graduated last year..

Terry Taylor, the principal of the district’s 83-student Washington 4-A Alternative School for students and dropouts and who apply to attend the school, said it provides flexible scheduling of academic courses taught by state-certified teachers, career training, and advisory sessions on social and job skills.

Wayne Smith, Texarkana mayor, objected to the charter school and its downtown location where students would be stranded for long periods without transportation.

“I want to support the Texarkana School District and the job they have done,” Smith said. “I speak for 36,000 individuals ... and we are very satisfied with our school administration, our School Board and our school teachers. We are of the opinion that we don’t need another school” operated by other than school officials and an elected school board held accountable by voters.

Sen. Steve Harrelson, D- Texarkana, objected to the possibility of Texas teachers coming to the Arkansas charter school without attaining Arkansas certification. He also said the Texarkana system already has to compete with three other districts on the Texas side of the border city.

“We have really turned the tide and can hold our own against those other three districts,” he said. “We are asking you for your assistance and not allow us to have to compete against one more school district in our own city.”

Board members voting for the motion to approve Premier High School were Jim Cooper of Melbourne, Vicki Saviers of Little Rock and Toyce Newton of Crossett. Those opposed were Mireya Reith of Fayetteville, Alice Mahony of El Dorado, Sam Ledbetter of Little Rock and Joe Black of Newport. Brenda Gullett of Fayetteville was absent. Chairman Ben Mays of Clinton does not vote unless it’s to break a tie.

“I’m not convinced that this product can succeed without the support of the community and without engaging teachers not familiar with the Arkansas system,” Reith said.

Ledbetter said the “wellqualified” applicant selected a community on the basis of its proximity to its Texas headquarters as opposed to selecting an area in greatest need. He also said the Texarkana district recognizes its needs and is better able to direct students into a recovery program. A charter school, he said, is restricted by state law to enrolling students on a first-come, first-served basis.

The state board was unified in denying the virtually identical applications for Diploma Charter schools in Jonesboro and West Memphis, which would be 11th- and 12thgrade schools targeting young people up to age 22 who have dropped out of school.

The schools were proposed by a corporation that previously received and then lost, after three years, a charter for its school in Osceola.

Sally Wilson of Osceola, president of the board of directors for Osceola Communication, Business and Arts Inc., the sponsoring organization for the schools, pointed to statistics that show 7,200 to 11,000 young people a year — depending on the source of the research — do not graduate from Arkansas high schools.

The Diploma schools were designed to provide day and night classes that would give students flexibility to work, receive job training, and meet family responsibilities while still attaining a diploma. Students could earn up to three credits in each six-week semester or up to 10 credits in 12 months.

Wilson said after the meeting that she will continue to work to provide a program for the young people. She urged people to call the governor and local chambers of commerce to say that a 25 percent dropout rate isn’t acceptable.

Superintendents in Craighead County school districts described for the state board how they collaborated to open an alternative school for students from their districts as well as provide adult education programs in their communities.

West Memphis similarly coordinates with the Marion School District to provide an alternative school that offers services similar to what the charter school would provide but short of the night classes, West Memphis High Principal John Collins said.