Taking on the Midtown burger challenge 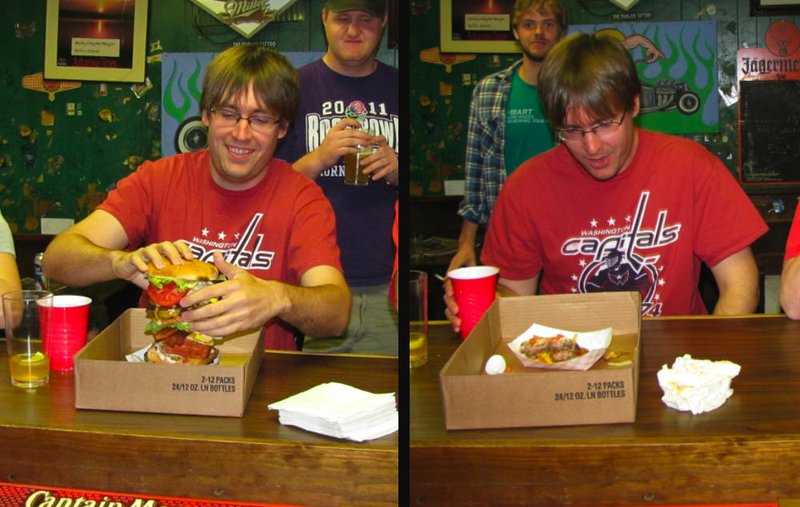 Online reporter Gavin Lesnick is seen before and after his unsuccessful attempt at the Midtown Burger Challenge. ( Katie Davis )

LITTLE ROCK — I really thought I could do it.

I've never so much as dabbled in any competitive eating, but somehow the hand-drawn sign advertising the burger challenge at Midtown Billiards has always enticed me.

It wouldn't be easy, I was sure, but the gluttonous feat seemed inherently doable: In half an hour or less, eat a monstrous burger concoction consisting of four beef patties, two fried eggs, several slices of bacon, fixings like cheese, tomatoes and pickles and one full can of SPAM.

The stakes are high. Eat it and you get the burger for free and your name etched on a plaque that holds fewer than a dozen names of the more than 200 who have tried. You also get a T-shirt.

Fail and you'll have to fork over $25 for the burger you couldn't finish while also suffering the shame of not clearing your plate. (Actually, as I later learned, the burger is so big, a plate doesn't suffice. It's served in an overturned box-top, which the cook described as a "trough.")

But I've always been something of a big eater and getting my name on a plaque at Midtown seemed a worthy goal, so when two friends asked if I wanted to join them in attempting the challenge, I didn't hesitate.

My thoughts immediately turned to SPAM. I had never had any, but I've heard all the stories about the various untoward pig parts that comprise its salty flavor. Midtown burgers are actually quite good - among the best I've had in Little Rock, even - but I knew that SPAM was going to be trouble.

So I devised a two-part strategy: One, don't try it beforehand, as doing so will probably just confirm existing suspicions and inspire dread. And two, eat that imposing, two-inch thick hunk of SPAM first. It was going to be tough to finish anyway and I wanted to be staring down the final few bites of a tasty Midtown burger - not unsavory SPAM - as I chomped toward the finish line.

Challenge day came Sunday and I was confident. I was confident when our planned start time was delayed by two hours at the last minute and I was even confident as our trio sat at the bar, watching the grill sizzle with more burger patties, SPAM hunks, bacon and eggs than you could count.

The bartender quickly went over the rules before our first bites. We could have as much water as we wanted, but once the clock started, we had to stay put.

When the bartender gave the sign, an iPhone set up across from us counted down from 30 minutes and the eating suddenly commenced. I tried to zone out from the challengers to my left and right and the group of supporters who gathered behind us.

I first extracted the SPAM sandwich, which was oozing with ketchup and bacon pieces, brought it to my mouth and took as large a bite as I possibly could.

The resulting emotions were bittersweet. The SPAM, to my surprise, tasted fine - not unlike ham dressed in the same Midtown burger fixings I had always enjoyed. But when I withdrew the messy sandwich from my face and saw how little a dent my biggest bite had made, I had my first sense that I might not get that T-shirt after all.

I soldiered on. I downed the SPAM in a matter of minutes and the bartender even said something about how I was on a good pace.

The top half of the burger was next. I started it with relative ease, but my fears intensified with each passing bite. I was getting full.

Fifteen minutes to go and I stopped for a quick break. I took a few sips of water and then managed to finish off the top two patties, which had been topped with one of the eggs. Two more burger patties, an egg and a bottom bun was all that separated me from glory.

My friend and fellow competitor, Andrew, had warned me of this. He tried the Midtown burger challenge last year and managed to get down to the last half-patty before throwing in the figurative napkin. He was back again for a second try Sunday, but he warned me it would get "dark."

And it did. Suddenly, I couldn't muster the strength to lift the last bit that remained. My stomach warned me there would be horrible consequences - the kind you don't want to endure while sitting at a bar, particularly while your friends stand behind you taking photos and shooting cell phone videos.

I didn't officially give up. I harbored the silly hope that my appetite would return in those final few minutes, but it didn't. I alternately stared at my box-top trough and watched as the iPhone timer clicked down to zero. When it did, I begrudgingly asked the bartender to put the $25 on my tab.

I had about two half burger patties and half of a bun left and my friends hadn't fared any better. There would be no plaque etchings. No T-shirts. No glory.

As you might suspect, I felt horrible the rest of the night. Sick to my heart over what I couldn't eat, and to my stomach for all I did.

But after a long, hibernation-like rest, I was much improved. And now, three days after the challenge, I'm back to my old self, with perhaps one exception.