States protest move allowing Wal-Mart, others to set up shop by DEMOCRAT-GAZETTE STAFF FROM WIRE REPORTS | November 29, 2011 at 4:34 a.m. 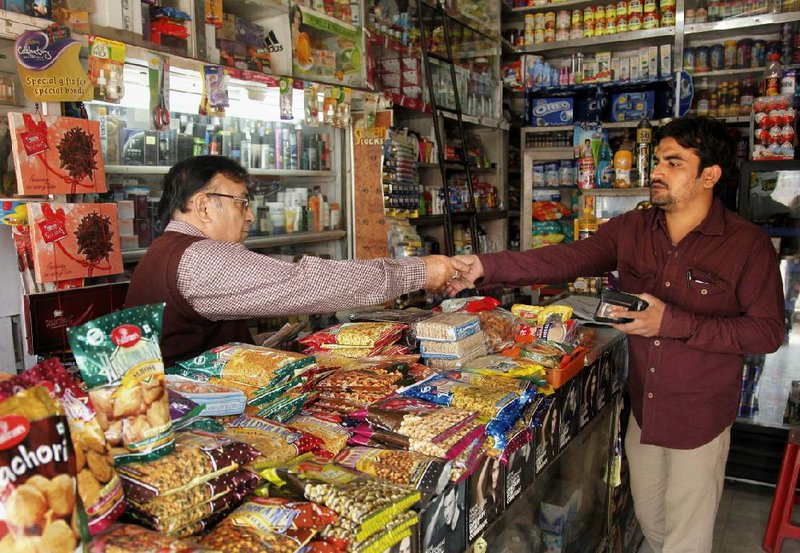 BOMBAY, India — India’s new open-door policy for foreign retailers is stirring a backlash from state governments who fear the move will be unpopular with their constituencies of small traders and shop owners.

The new regulations don’t require Parliamentary approval, but to set up shop, foreign retailers such as Wal-Mart and Tesco must get a green light from the government of the state where it will be located.

Five state leaders made clear over the weekend their unwillingness to let foreign companies in. Parliament adjourned Monday in an uproar over the issue and Communist Party-controlled trade unions have pledged to strike Thursday.

The central government has taken out advertisements to quell critics, championing the new rules as a way to make food cheaper for everyone, eliminate waste that claims up to 40 percent of all fresh produce, and create millions of jobs.

“There is a lot of very strong opposition to this initiative that will take a very long time to resolve,” said Manish Sonthalia, who manages $250 million in equities at Bombay-based Motilal Oswal Asset Management Co. “It is disappointing that there is no consensus at all.”

The leaders of the states of Tamil Nadu, Uttar Pradesh, Kerala, Orissa and West Bengal have all publicly opposed the ruling Congress Party’s move to let foreign retailers own up to 51 percent of supermarkets and 100 percent of single-brand stores, according to the Press Trust of India.

India’s main opposition BJP party as well as the Congress Party’s coalition ally, the Trinamool Congress, have also voiced opposition. India’s Hindustan Times newspaper calculated that 28 of the 53 cities where retailers could set up under the new rules are in states controlled by political parties opposed to the regulations.

Uttar Pradesh Chief Minister Mayawati, the leader of India’s most populous state, was among the regional leaders criticizing the government’s decision Sunday.

She said allowing foreign direct investment in the retail sector would bankrupt her state by forcing local shops to close down and was motivated by a desire to appease overseas companies.

The ability of individual states to hinder the plans of foreign companies highlights the growing power of regional leaders in India at a time when the national government is weak, according to Satish Misra, a political analyst at the New Delhi- based Observer Research Foundation.

“The smaller parties are able to blackmail the government, completely stalling decision making,” said Misra. “This is bad policymaking because you have parties that are only thinking on a smalltime horizon. They are not thinking about what is best for India as a whole.”

Some say the wave of opposition won’t scuttle the changes, which foreign retailers have been pushing for a decade.

“There are enough states which would be positively inclined,” said Saloni Nangia, head of retail and consumer products at Technopak Advisors, a New Delhi based consulting company. “Retailers will take some time before they start implementing. By then things would settle down.”

The new rules would allow big retailers such as Wal-Mart to set up supermarkets in India’s major cities and will likely herald the entrance of companies like Swedish retailer Ikea, which has been keen to enter India for years, but only if it can maintain control of its operations.

The changes could also help domestic players who have struggled to succeed on their own.

Future Group Chief Executive Kishore Biyani, who has been likened in India to Wal-Mart and Sam’s Club founder Sam Walton, welcomed the entry of foreign chains.

“This policy is a win win win,” he told The Associated Press. “It’s a win for consumers, a win for retailers, a win for suppliers and a win for farm producers. Ninety percent of India should benefit.”

Biyani would not discuss details of his negotiations with foreign partners, but said he’s open to forging joint ventures, particularly in consumer electronics, where he’d like to become the market leader.

Tamil Nadu’s chief minister J. Jayalalithaa in a letter Sunday to Prime Minister Manmohan Singh said she wouldn’t let retailers into her state, describing the central government’s move as a “wrong decision, taken under pressure from a few retail giants starved for capital infusion for their future survival,” according to the Press Trust of India.

Mayawati, the fiery leader of Uttar Pradesh, said foreign investment in retail would make her state “bankrupt.” She is locked in a battle with the Congress Party over coming state elections.

The chief minister of Kerala, which is controlled by the Congress Party, also came out against the changes.

Narendra Modi, the chief minister of Gujarat, has been silent on the issue. Though he is renowned for being business friendly and actively seeking foreign investment, a major constituency of his BJP party are the small traders and mom-and-pop shops that many fear will be put out of business if larger companies are allowed greater access.

The government tried to design the new retail policy so that the price of entry into India’s 1.2 billion-strong consumer market would be improving the nation’s food distribution and bolstering local businesses.

Under the new regulations, retailers must put at least half their investment into back-end infrastructure such as refrigerated storage, with 30 percent of procurement from small companies, and they can only open outlets in cities with a population of more than one million.

Technopak says the new rules could attract $5 billion in investment over the next five years.

Information for this article was contributed by Ericka Kinetz of The Associated Press and by Andrew MacAskill and Bidhudatta Pradhan of Bloomberg News.