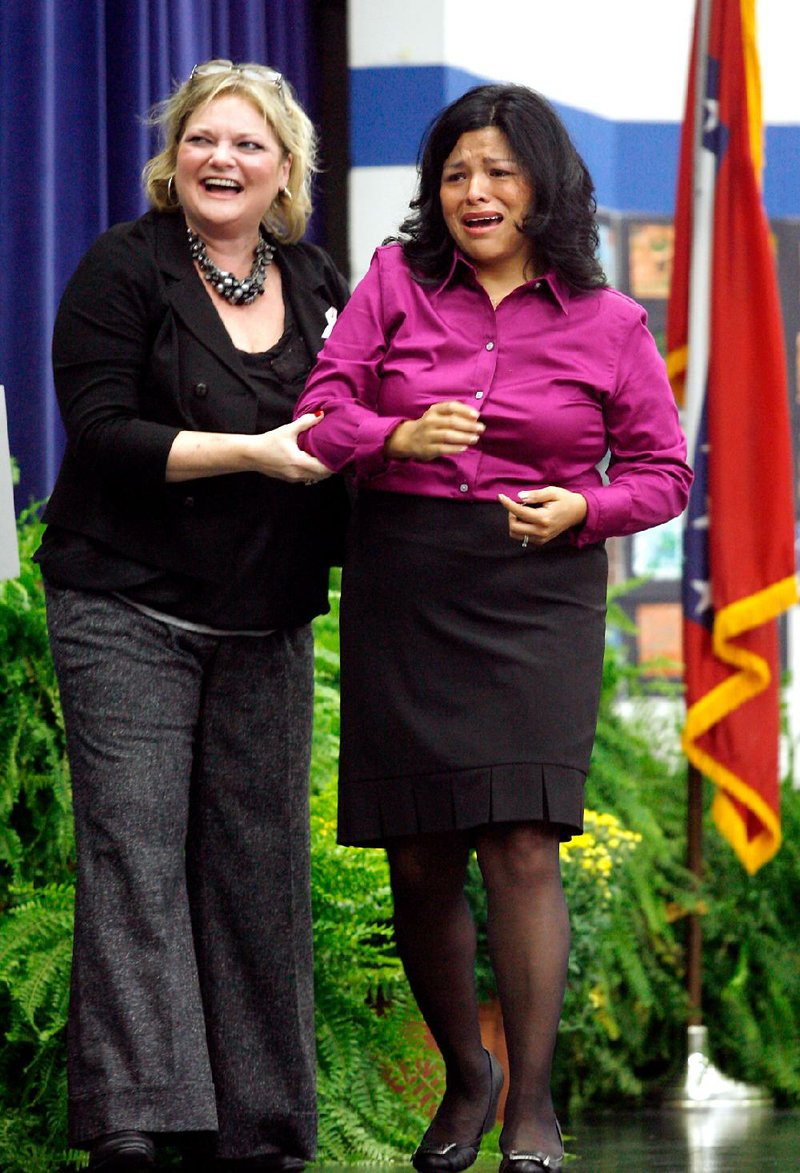 SPRINGDALE — Gov. Mike Beebe surprised Andrea McKenna during an assembly Friday at J.O. Kelly Middle School, telling her she was the only educator in Arkansas this year to receive the prestigious Milken Educator Award.

“God is good. Dreams come true,” said McKenna, who teaches sixth- and seventh-grade English to second language students. “I wasn’t the [gifted and talented] student in my school. I wasn’t the best athlete of the year. I wasn’t asked to prom. I want to tell you that this is such an awesome experience to just be a teacher and to love you and to let you know that dreams come true.”

Beebe said McKenna is a great example of the American dream.

“Her parents were uneducated. They knew that the value of education was going to be important for their children. They wanted to make sure their kids got an education. She worked hard and got an education and decided she wanted to give back,” Beebe said.

Now, she’s helping her students achieve their dreams, he said.

Before Friday morning’s announcement, the faculty and students thought they were attending an assembly with the governor and Education Commissioner Tom Kimbrell as part of Month of the Young Adolescent, which is in October.

Kimbrell said a few words commending the hard work of students, teachers and support staff members and introduced Gary Stark, president of the National Institute for Excellence in Teaching, based in Santa Monica, Calif. Stark was principal of Helen Tyson Middle School when he won a Milken Educator Award in 2001.

Stark began talking about the importance of teachers and principals. “They have an awesome responsibility to educate you,” he said.

He told the assembly that athletes receive Olympic gold medals and actors receive Oscars. A man named Lowell Milken, chairman of the Milken Family Foundation in Santa Monica, thought educators deserved a big prize, too, he said, and created the Milken Educator Awards program, which includes a $25,000 cash prize for each winner. Milken also established the national institute that Stark leads today.

McKenna, who has taught for 10 years at J.O. Kelly, is among 40 Milken Educator Award recipients across the country this year. Her principal, Sara Ford, sent the initial recommendation to the Arkansas Department of Education. The department convened a panel to review the 16 state nominations, said Gloria Stephens, Milken Educator Awards coordinator. The panel submitted five names to the Milken Foundation after reading their profiles and interviewing references, though the process is kept secret.

“It is someone who’s exceptional, both in instruction and also in leadership inside and outside of the classroom,” said Jana Rausch, a spokesman for the Milken Family Foundation. “It’s not a lifetime achievement award. It’s actually a recognition of what these educators have accomplished thus far and their long-term potential.”

The goal is to elevate the teaching profession and inspire students to enter the field, Rausch said.

McKenna’s compassion and love for her students, her history as the daughter of migrant farm workers and her ongoing desire to improve made McKenna stand out to the state panel that recommended her, Stark said.

McKenna represents the best qualities of a teacher, he said.

“I just try to find what I have in common with them,” McKenna said of her students. “I want to know about them.”

Many of McKenna’s students are the first generation in their families to live in the United States, she said. Their parents came from other countries, including El Salvador and the Marshall Islands.

McKenna’s father was from Mexico. Her mother left school after the third grade, and her father left school in the sixth grade. She and her two sisters, though, earned college degrees.

She said she wants her students to know that she supports them, loves them and believes in them.

“You can have bad days,” McKenna said she tells her students. “At the end of the day, you can quit that day. The next day, you start all over.”

McKenna’s students respect her because she has firm demands for them, not only in academics but also in their behavior and choices, said seventh-grade math teacher Rachel Carethers. They respond by working hard for their teacher, she said.

Another colleague, seventh-grade English teacher Sarah deVerges, said McKenna pushes her students “to do even more than they thought they could.”

In addition to her classes during the day, McKenna teaches in an after-school program in which students produce films for a festival.

“She tells everyone to try their best, follow their dream and to never quit,” said Daniel Gomez, 12, who is producing a film on how to survive middle school. He wants to make comedy films.

“There’s someone out there who cares what I want to be,” he said of his teacher, “and someday I could be important, too.”