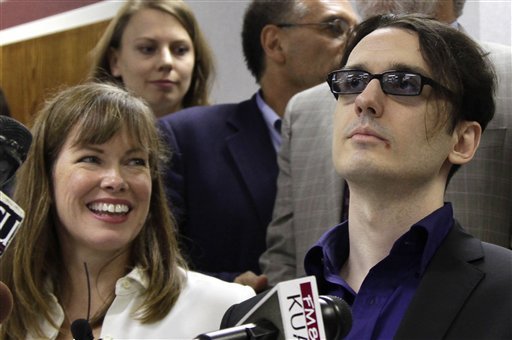 Damien Echols, right, and his wife Lorri attend a news conference at the Craighead County Court House in Jonesboro, Ark., Friday, Aug. 19, 2011, after Echols and two other men entered guilty pleas to to crimes they say they did not commit in order to be set free. The defendants, known by their supporters as the West Memphis 3, agreed to a legal maneuver that lets them maintain their innocence while acknowledging prosecutors have enough evidence against them.

WELLINGTON, New Zealand — Director Peter Jackson said Friday that he was working with Damien Echols in hopes of getting the man a complete pardon.

Jackson, best known for his "Lord of the Rings" trilogy, said he received an exemption to New Zealand law to allow Echols to visit him. Echols was part of a group known as the West Memphis Three who were convicted of killing three boys in the U.S. state of Arkansas in 1993. He and the other two men were released in August after pleading guilty to lesser charges and insist they are innocent.

At a news conference Friday in which Jackson stood alongside New Zealand Prime Minister John Key at the North Island set where Jackson is filming a two-part version of "The Hobbit," the director said he'd gone through the same process open to everyone in applying for an exemption to immigration laws.

"There are all sorts of emotive headlines about Damien Echols, killer, coming to New Zealand, but the reality is that Damien Echols is an innocent man who has spent 18 years incarcerated in a tiny cell," Jackson said.

The director told reporters that he and partner Fran Walsh had worked for seven or eight years to try and help free Echols.

"He's come here to work with us on a couple of things," Jackson said. "We're doing investigative work, we're doing forensic work ... with the purpose of getting a complete pardon."

Jackson clarified that Echols was not taking part in work on "The Hobbit."

Echols is one of the highest-profile death row inmates to be released in the U.S. Three HBO documentaries about his case brought national attention and sparked the involvement of several celebrities, including Pearl Jam front man Eddie Vedder.

Echols, Jason Baldwin and Jesse Misskelley — who were teenagers at the time — were convicted of killing three 8-year-old boys who were found naked and tied in a drainage ditch in the Arkansas town of West Memphis. The case hinged on the testimony of witnesses who said they'd heard the teens talk about the killings.

Echols was the only one sentenced to death.

In 2007, lawyers representing Echols claimed that new DNA tests taken from the crime scene didn't match any of the men. In August, the men agreed to plead guilty to lesser charges and were released immediately for time served — all the while publicly maintaining their innocence.