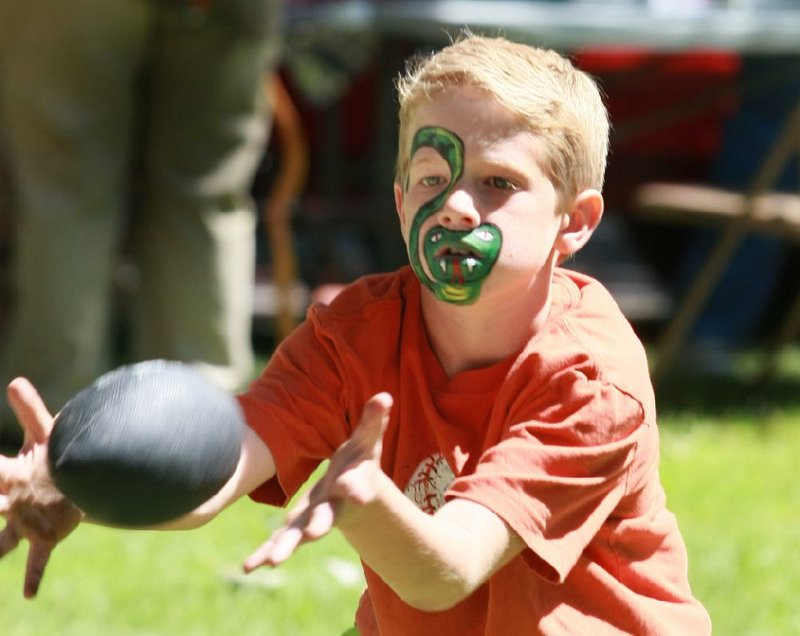 Drew Warren, 8, of Benton catches a football at the Central Arkansas Labor Council Labor Day Picnic on the grounds of the Governor’s Mansion in Little Rock on Monday.

LITTLE ROCK — Amid a sluggish economy and fears of a double-dip recession, union members who gathered Monday for a Labor Day picnic at the Governor’s Mansion in Little Rock had a message for the political candidates who came to promote their campaigns.

“This is about jobs,” said Jean Hervey, a vice president and regional director of Worker’s United, which represents workers in the laundry, food service, hospitality, gaming, apparel, textile, manufacturing and distribution industries. “We need to rebuild this country and build it on a foundation that will help working people.”

While sponsored by the council, Brewer said, the picnic was open to anyone.

“This is about working families,” Brewer said. “It’s not just about union and not union.”

The national day off work has been celebrated for nearly 130 years, oftentimes with picnics thrown by unions. Congress made the day, believed to have been started by carpenters, a federal holiday in 1894.

In Little Rock, a stream of Democratic candidates planning races for the Legislature next year, as well as at least two candidates for a nonpartisan Pulaski County circuit judgeship, took turns at a microphone giving brief speeches to introduce themselves.

Last year, Democrats took a drubbing at the polls in Arkansas and elsewhere, with three congressional seats and three state constitutional offices switching from Democrat to Republican. Democrats also saw their majority shrink in the Legislature. They now control 54 of 100 seats in the House and 20 of the 35 seats in the Senate.

“When we get lazy at the voting booth, we get what we’ve got right now,” State Sen. Joyce Elliot, a Democrat from Little Rock who described herself as “labor to the core,” told the crowd Monday.

Phynaus Wilson of North Little Rock, a Democrat who worked as an aide to former U.S. Rep. Vic Snyder, used the event as a forum to announce his candidacy for Senate District 34.

A fellow Democrat, state Rep. Barry Hyde of North Little Rock, also said he plans to run for the seat.

Alan Hughes, president of the Arkansas AFL-CIO, told union members the candidates “ought to be listening to you right now and understand one thing: It’s about jobs.

He also said politicians should “keep their darn hands off” Social Security and should preserve Medicare and Medicaid benefits.

No party should take union votes for granted, Hughes said.

“We don’t belong to any of them,” he said. “We stand for working families.”