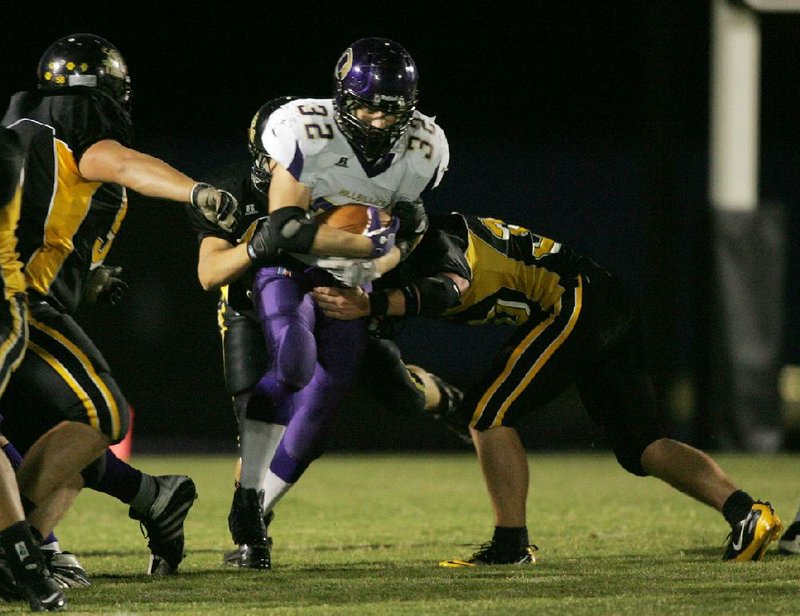 Ozark running back Asher Ree punches through the defense during the first half of Friday night's game against Prairie Grove.

PRAIRIE GROVE — Too many missed opportunities and too much Asher Ree doomed Prairie Grove on Friday night.

“We just couldn’t convert,” Prairie Grove Coach Danny Abshier said. “We threw it away. An interception and a fumble and we kind of gave it away in the first half. We ran out of time.”

Ozark scored all its points in the first half for a 13-3 halftime lead.

The Hillbillies drove 95 yards after recovering Weston Bartholomew’s fumble at the 5. Ree gained 42 yards on the drive, including a 1-yard touchdown run with 6:10 left in the first half for a 13-0 lead.

Ozark had taken a 7-0 lead with 24 seconds left in the first quarter on a 28-yard touchdown pass from Jonathan McKenzie to Brandon Brokeshoulder.

Prairie Grove, which had gotten a 23-yard field goal from Landon Allen with 4:20 left in the first half, scored early in the second half on a 54-yard pass from Cooper Winters to Bartholomew.

But Ree’s running and Jordan Easom’s punting kept Prairie Grove pinned on its side of the field most of the remainder of the game. Easom averaged 40.2 yards on five punts, including a 51-yarder.

“We told these guys the second half we’d make some adjustments, and we’ve done a pretty good job of it this year,” Ozark Coach Jeremie Burns said. “Hopefully they can keep plugging away and we cankeep getting better.”

A bad center snap pinned the Tigers inside their 15 with about five minutes remaining. After a punt, Ozark was able to run out the final 5:13 by picking up three first downs.

“At the end we were hoping to get a break and do something with it, but we couldn’t ever find a spot,” Abshier said. “Their running back did a good job. They kept it on the ground and started running the clock and we couldn’t do anything.”

Deon Clay also returned an interception for another Farmington touchdown.

Napier scored twice in the first quarter on runs of 7 and 2 yards as Booneville jumped out to a 14-0 lead and never looked back.

Taylor Wyatt hit Chad Simpson with a 20-yard touchdown pass in the second quarter, and they hooked up again in the third quarter for a 57-yard score. Simpson finished with 3 receptions for 73 yards, while Wyatt completed 7 of 10 passes for 113 yards.

Charles Reynolds returned a punt 55 yards for another touchdown, Gavin Taylor had a 41-yard touchdown run, and Brandon Carter capped Booneville’s scoring with a 72-yard run in the fourth quarter.

Dardanelle had a chance to tie the game late in the fourth quarter, but RandyVelasquez missed a 50-yard field goal attempt.

Redman scored on runs of 1 and 5 yards and hit Skylr Grace with a 20-yard touchdown pass that proved to be the winner.

Ballentine scored on a 25-yard run in the fourth quarter.