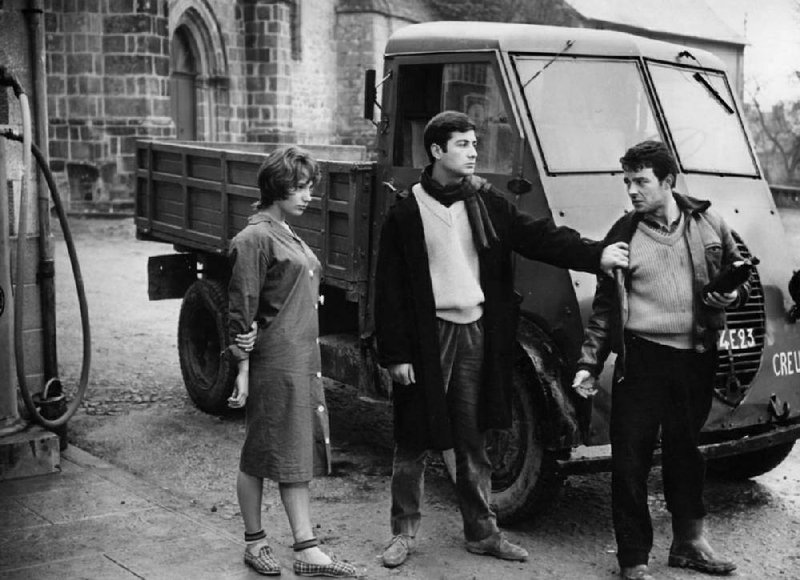 LITTLE ROCK — Claude Chabrol was 80 when he died a little more than a year ago - I meant to get around to writing about him then, but there was no time.

And obituaries are not my favorite thing to write, for our relationship with an artist ends not with his death but with ours (if then). Besides I knew I’d have occasion to write about Chabrol - who’s often shorthanded as a kind of French Hitchcock - and his work, at a later date.

That occasion has been supplied by the Criterion Collection, which this week has released a Blu-ray edition of Chabrol’s first film, Le Beau Serge (“Beautiful Serge,” suggested retail price $39.95). It is widely considered the first film to emerge from the French New Wave - it premiered at the Cannes Film Festival in 1958 (where it won the Prix Jean Vigo, which is typically given to a young director for his “independent spirit”) and was officially released Jan. 10, 1959, a few months before Francois Truf-faut’s The 400 Blows and half a year before Alain Resnais’ Hiroshima Mon Amour.

Some people debate this, and I’ve never found it very useful to draw clear lines of demarcation in these things - there was something of rock ’n’ roll in Ike Turner’s left hand when Jackie Brenston cut “Rocket 88,” but was it the first time the spirit ever shivered through a body? (There are Frenchmen who will tell you the New Wave began in 1953 with the American Morris Engel’s Little Fugitive - the story of a little boy who runs away to Coney Island after he’s tricked into believing he has shot and killed his older brother.)

But anyway, even if you don’t accept (or care about) the claim that Le Beau Serge is the first New Wave film, it is definitely the first Chabrol film, and one of his best. (Chabrol made more than 70 films. Perhaps the best known to casual moviegoers would be Les Biches, from 1968, or maybe 1970’s The Butcher, or his 1991 version of Madame Bovary with Isabelle Huppert in the title role, or perhaps the 2000 mystery that also starred Huppert, Merci Pour le Chocolat. But even if you think you don’t know his work, you probably know his work - his 1968 film The Unfaithful Wife was remade by Adrian Lyne in 2002 as Unfaithful.)

It is, on the face of it, a simple story about a homecoming. Recovering from a vague but life-threatening illness (likely tuberculosis), a successful young man, Francois (Jean-Claude Brialy), returns home to the small village where he grew up after a decade in Paris. Upon his arrival he spots an old friend, Serge (Gerard Blain), walking in the street. Francois calls out to him and Serge turns and looks in his direction, but walks away.

While Francois expects his native village to be a comforting place to convalesce, he finds it anything but peaceful.

Serge’s life in particular is in disarray. He’s bitter to have never escaped his provincial life, and he feels dragged down by his adoring, pregnant wife Yvonne (Michele Meritz). He is a self-pitying and mean drunk, and if you squint you can see in him something of the character James Dean played in Rebel Without a Cause. He is a self ruined wastrel, betrayed by his own nebulous dreams.

The highly Catholic Francois, horrified by what his friend has become, undertakes to save him from himself. He urges Serge to leave the village, and is rebuffed - by his old friend and the village priest, who suggest that Francois is probably doing more harm than good.

Meanwhile Serge continues to spend his days drinking with his father-in-law Glomaud (Edmond Beauchamp), who is rumored be the father of 17-year-old sexual predator Marie (Bernadette Lafont), who happens to be Serge’s sister-in-law. “She goes with everyone,” the innkeeper tells Francois, and so it is hardly surprising when she gets around to him.

This doesn’t sit well with Glomaud, who sees Francois as a hypocrite - too good to drink with him but eager to sleep with Marie. When confronted, Francois is only able to defend himself by repeating an unsubstantiated rumor that Marie is not Glomaud’s daughter - which results in Glomaud’s stumbling off to rape Marie.

Francois stays in the village, where he’s not wanted, out of the stubborn faith that his very presence will ennoble it - or at least shame the villagers. None of Francois’ attempts at improving his friend or his hometown are met with anything but derision and violent blow back - when he follows Serge into the street to berate him for treating Yvonne harshly, Serge attacks him, to the encouragement of the townspeople yearning to see the Parisian “taught a lesson.”

The film ends on an ambitious yet strangulated note, with Francois dragging an unconscious Serge through the snow, so that he might be present at the birth of his child. Francois manages to awaken Serge just as his son is being born - and then he dies (or perhaps simply passes out), uttering the film’s last words: “I believed.”

As a note in the opening titles explains, Chabrol shot the film entirely in the village of Sardent, a small town in central France, where the young Chabrol had lived during the Nazi occupation of France. This made the film cheaper to shoot - Chabrol knew the territory and used actual locations and nonprofessional actors. His cinematographer, Henri Decae, was well versed in shooting in available light.

(Actually, it’s these points of style more than the script that mark Le Beau Serge as a New Wave film - had the same story been shot with better-known actors and studio lighting, it might or not still be of interest but it certainly wouldn’t have been considered innovative.)

Considering how the village is portrayed in the film, it’s tempting to take Chabrol’s expression of “warm thanks” to the people and authorities of the village as an ironic gesture - the fictional village is a place of vicious provincialism. And Chabrol, an influential film critic before beginning his filmmaking career, was essentially mirroring Francois’ homecoming by returning to Sardent. Still, he seems as disdainful of Francois’ religiously driven dogooderism as he is of Serge’s reflexive - and self-romanticizing - self-pity.

In his next film, Les Cousins (also just released by Criterion in Blu-ray version), Chabrol essentially reversed the polarity of this film. That film again starred Brialy and Blain, this time as cousins studying law in Paris who fall in love with the same girl. And in that film Blain played the saintly one - a naive, honest provincial - while Brialy is the decadent, worldly-wise one. The films were written about the same time, with Le Beau Serge being produced first for practical reasons.

Whether or not that was the start of the New Wave, it was the start of Chabrol. And though the director is gone, his work is still there for the discovering. In the foreword of his book-length interview with Hitchcock, Truffaut quoted Jean Cocteau on Marcel Proust:

“His work kept on living, like the watches on the wrists of dead soldiers.”