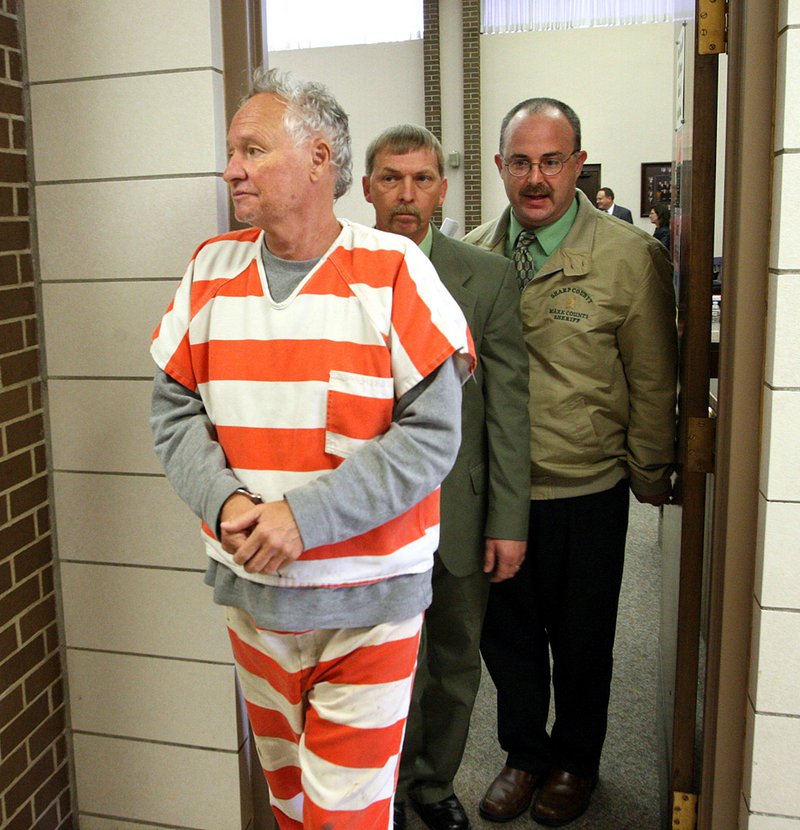 Wayne Watkins is led from a Sharp County courtroom after a hearing in February of 2011.

LITTLE ROCK — Former Hardy land developer Wayne Watkins faces $3 million in civil penalties as a result of a judgment rendered in a lawsuit filed by Attorney General Dustin Mc-Daniel in 2008 over claims that Watkins swindled thousands of dollars from buyers in a failed land deal on the Spring River.

Smith set the hearing date in an order issued in January. According to that same court document, Smith granted McDaniel’s request for summary judgment because “Defendant Wayne Watkins failed to file a timely response to this pleading.”

Kissee said he did not respond to the motion for summary judgment because of an oral plea agreement in a related criminal case filed against Watkins. Kissee said that oral agreement included a stipulation that he not fight the civil case.

“Communications have been had and done. But no agreements have been reached,” Boyce said. “I’m really needing to know that attorney general’s piece of the puzzle before I go further in this [criminal] case.”

Kissee and Boyce said the details of the lawsuit judgment likely will affect any future trial or plea deal in the criminal case. Boyce charged Watkins with theft by deception in 2007 specific to his dealings with two property buyers. That trial is still pending.

Watkins sold hundreds of parcels of land over three decades for family and camping resorts along the Spring River as part of his Spring River Beach Club development. He used installment land contracts in which he was the financier.

Watkins held the land deeds in the installment land contracts until they were paid off and, in numerous cases, used land being bought through installments by third parties as leverage to gain additional loans for his own use.

As those loans defaulted, the banks repossessed the land, often unbeknownst to the people who thought they had purchased it from Watkins and had been paying him in monthly installments.

Kissee had not yet heard the judgment details this week but said Watkins is broke.

“[Watkins is] judgmentproof: He doesn’t have anything,” Kissee said of his client Wednesday. “[The state] would be 20th in line with all the banks wanting something.”

On June 1, 2008, the Arkansas Real Estate Commission voted to “revoke Respondent Wayne Watkins’ real-estate license and that he is fined $3,000.”

According to reports of that hearing, the commission found that Watkins violated four statutes and “committed acts involving fraud, dishonesty, untruthfulness and untrustworthiness ... and his conduct constitutes improper, fraudulent, and dishonest dealing.”

At that same hearing, Watkins was ordered to pay $11,000 in restitution to Billy and Pat Mann, one of two couples listed in the criminal case. Watkins had told them that he would issue a warranty deed when they paid off their land, but the property they bought had already been repossessed by a bank when Watkins defaulted on a loan he had leveraged the land to obtain.

McDaniel’s motion for summary judgment in the civil case alleged that Watkins “engaged in a systematic, planned, and coordinated scheme to defraud consumers through the use of land sale contracts. The real estate Ponzi scheme implemented by the Defendant was unconscionable, misleading, and deceptive and has resulted in egregious violations of the Arkansas Deceptive Trade Practices Act.”

Donna Goodwin, Watkins’ longtime secretary, said when questioned by the attorney general’s office that “land sale contracts were never recorded and that she was not allowed to give original contracts to consumers for recording at the courthouse.”

By not recording the contracts, the buyers were left with little recourse when Watkins’ financial house of cards began to fall.

According to court documents, Watkins first began to financially falter in 1988 when he failed to pay property taxes on several properties. Shortly after, he began to leverage the properties with loans to stay fluid.

Court documents indicate that there are hundreds of people who bought property from Watkins over the years, most of whom can’t be located.

The attorney general’s motion, which wasn’t contested by the defense, said Watkins failed to register the property sales for decades to protect his cash flow because banks would have refused to use property as collateral if it was under contract with a buyer.

The attorney general’s motion concluded that “the Defendant could ultimately obtain money from his property twice: once from the consumer and once from banks.”