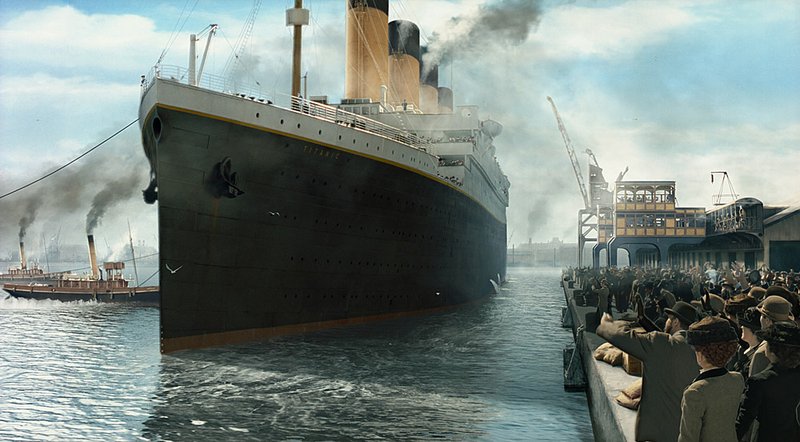 Nonetheless, Cameron’s account of the April 15, 1912, sinking of the gigantic luxury liner and the fictional romance he placed on board sails confidently past its narrative deficiencies. A good cast and Cameron’s obsessive approach make three hours and 14 minutes seem remarkably brisk.

If you missed Titanic when it first sailed to box office glory in1997 and on to Oscar glory, the tale can best be summarized by a clerk who showed me the two VHS tapes that held the movie, “Tape one, they fall in love. Tape two, everybody dies.”

The romance in question involves a penniless artist named Jack Dawson (Leonardo DiCaprio) and a young socialite named Rose (Kate Winslet). Rose is reluctantly engaged to an annoyingly smug rich guy named Cal (Billy Zane). Rose would probably remain single if her late father hadn’t left her and her fussy mother (Frances Fisher) with nothing but debt and a good name. Naturally the brash but plebeian Jack is infinitely more appealing.

Sadly, a huge iceberg is about to turn the “unsinkable ship” to undersea scrap metal, and there’s a shortage of lifeboats. Apparently, shortsighted people in management thought they ruined the aesthetics of an unsinkable ship.

If you can get past the occasional Cameron clunker (Who can forget, “I’m the king of the world!”) and Zane’s almost amusingly over-the-top turn as Cal, Titanic still manages to make the tragedy seem more vivid than a statistic in a history book.

While Cameron managed to make CGIs a viable substitute for cost-prohibitive sets, he also knows some of the basics of visual storytelling that have eluded his contemporaries like Michael Bay. One of my favorite scenes involves not wreckage but a nervous Jack Dawson trying to shake hands and mingle with patricians as if he were one of them. Seeing DiCaprio trying to imitate the body language of the other performers made me wonder if Titanic might have worked better as a silent movie. After The Artist, who knows?

While I wish Cameron hadn’t bothered with the 3-D transfer, it’s obvious that he sees 3-D as more than a simple gimmick. As Avatar demonstrated, Cameron considers it a powerful storytelling tool, and he uses it well. The sequences in the engine room and on deck do look pretty impressive in digital 3D, and Cameron’s subtlety with his computerized toys thankfully prevents their distracting us from Winslet’s performance or from Stuart’s dignified turn as a ninety something Rose.

Ironically, with the new projection technology, some of the original footage doesn’t look quite as convincing as it did 15 years ago. Nonetheless, it’s still refreshing to have a film with a strong female lead, and Cameron’s earnest heart and his intimidating eye for detail make any objections to his beautiful - if mildly ungainly - film pointless.