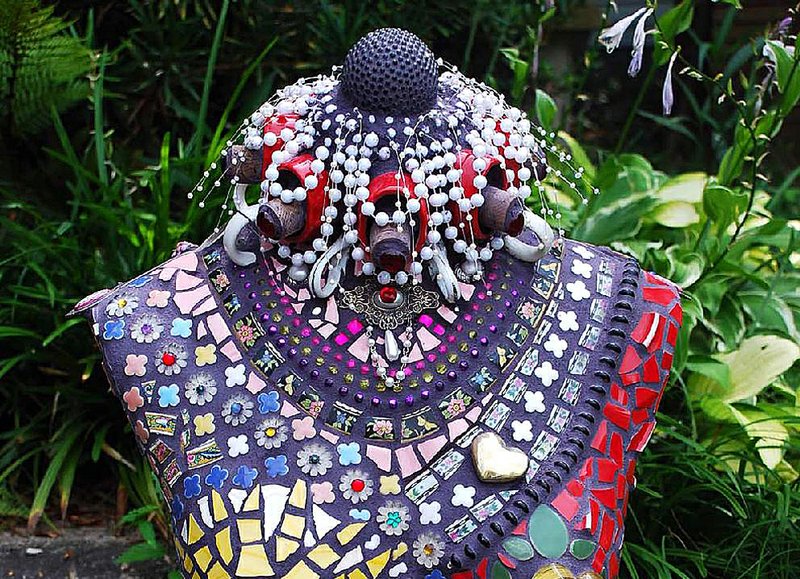 LITTLE ROCK — Kandy Jones lives by the old motto “one man’s trash is another’s treasure.” So much so, she has turned it into a bona fide business.

Speaking at the Arkansas Arts Center in Little Rock recently in a presentation titled “Finding Your Creative Niche,” Jones of North Little Rock shared how her own creative fire is fueled by using found objects - items that were originally used as something else and then discarded, thrown away, given away or sold at a yard sale - in her artwork.

That’s the point at which Jones steps in to recycle or repurpose those objects.

“During all of my years of working with nonprofit organizations, I learned how to do something with nothing,” she explained to the crowd of about 20 gathered in the museum’s lecture hall. “And I’ve learned to do that with art as well.” Jones currently sells her artwork and also often works on commissioned pieces.

Jones, who says she considers herself to be a “redneck Martha Stewart,” says her frugal approach has several names.

“Some call it trash to treasure, others call it re-purposing and some call it shabby chic,” she says, “but I call it the art of recycling.” Jones recently appeared at the Arkansas Flower and Garden Show at the Statehouse Convention Center in Little Rock where she gave a “how-to” presentation on turning pizza boxes into Hypertufa steppingstones and has also spoken at a Little Rock Civitan Club meeting on “The Art of Recycling.”What’s Hypertufa? Tufa rock is a limestone-based substance made naturally when water, lime and organic plant matter are combined; it is easy to carve. Over time the natural supply of tufa began to diminish and it was replaced by a mix of Portland cement (which is highly processed lime), peat moss and water. The result is water permeable, lightweight rock that canbe carved or easily molded, which moss adheres to and easily grows.

Hypertufa can be incorporated into a variety of yard art, covering masks, pots and oversize elephant ear leaves. It can also be used to turn cheap dollar-store chip and dip trays and cardboard strawberry boxes into planters.

During her talk at the Arts Center last week, accented by dozens of slides depicting her projects, Jones focused on garden art, a timely topic.

“I started with one area of the yard where I couldn’t grow anything and just went from there,” she says.

First, beneath her unusually long-lived 80-year-old dogwood tree, she created a patio area using stones made of Hypertufa.

Jones also spoke of working with mixed media and mosaics (she created the tile floor sporting the Little Rock Convention and Visitors Center’s logo in the bureau’s gift shop in the River Market).

True, Jones has an advantage many others don’t - her husband, Jimi Brewi, serves as technical director for the Arts Center’s Children’s Theatre.

“Old props don’t die, they come to my yard,” she says.

But she says those who create are limited only by their imaginations.

She spoke of wooden boxes (with holes drilled in the bottom and lined with plastic) being transformed into garden planters, old enamelware pots and bowls being re-purposed as planters, using discarded screen doors as trellises and making screens out a series of wooden doors. She mentioned wrapping rocks with wire to hang as yard jewelry from trees along with tea lights in old jars and an old chandelier (with its electric lights replaced by candles).

As for those less-than-attractive lighted plastic penguins displayed on lawns as Christmas decorations, Jones covers them with pieces of black and white broken china to make mosaics, transforming tacky into wow.

Speaking of Christmas, Jones took a pair of wooden toy soldier figures flanking the outside of her home’s front door and adorned their backs with aliens to display as creepy Halloween decor.

Jones doesn’t mind others swiping her ideas - in fact, she expects it. She invites those interested to visit her website garagesalequeen.biz.

“I’ve been teaching for years and expect to be copied,” she says. “We all copy from someone else but the cool part is watching as people come into their own and expand upon an idea.”

One of the final slides she displayed depicted a piece of art with the words:

“That’s my other motto,” she says.

Print Headline: From disCard to decor