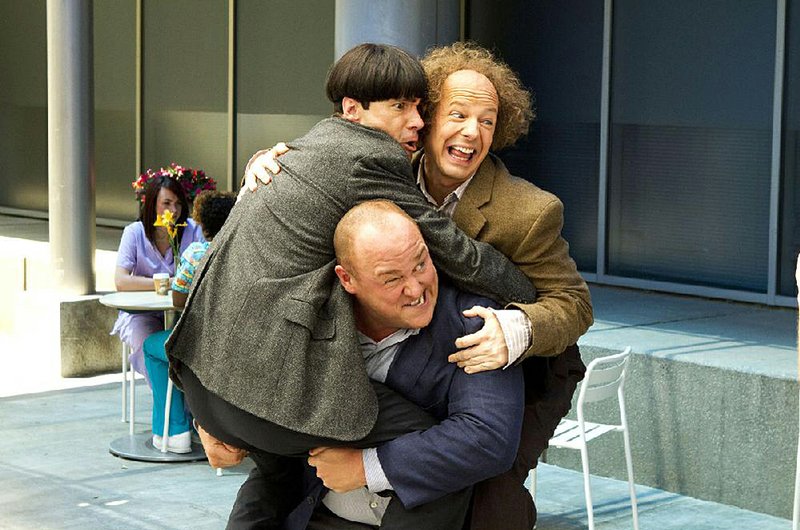 Stooges Moe (Chris Diamantopoulos), Curly (Will Sasso) and Larry (Sean Hayes) get up to high jinks in the Farrelly brothers’ long-awaited (by some) The Three Stooges.

LITTLE ROCK — Watching the Farrelly brothers’ “tribute” to The Three Stooges is like getting repeatedly poked in the eyes. It’s painful.

As someone who grew up watching the real Moe Howard, Larry Fine and Jerry “Curly” Howard smack each other repeatedly, it’s hard not to want the duo who gave us that vulgar delight There’s Something About Mary to succeed.

But as anybody who has suffered through one too many shorts that had Moe and Curly’s brother Shemp instead of Curly himself can tell you, no matter how much makeup you use or how skillful you are at impressions, there was only one set of Stooges, and Sean Hayes, Will Sasso and Chris Diamantopoulos simply can’t replicate the violent magic.

Actually, there are a few things Howard, Fine and Howard had that their successors couldn’t match. For one thing, most of their work was in shorts that lasted less than half an hour, so all the eye gouging and head butting didn’t get old. The three also had an amazing sense of timing among themselves, so even the most repetitive slaps or worn out puns still came out funny. Hayes and company have certainly worked hard, but Curly Joe wasn’t Curly.

The Farrellys crib from the Blues Brothers to give Moe (Diamantopoulos), Larry (Hayes) and Curly (Sasso) something to do when they’re not inflicting pain on each other. The Stooges have to raise over $800,000 in a month to save the orphanage where they were raised.

Jane Lynch, Jennifer Hudson and Larry David play three of the nuns who had the misfortune of seeing them to adulthood. While David is named Sister Mary-Mengele (get it?) and Hudson gets to sing, Lynch is better in Sue Sylvester’s sweats than in a nun’s habit.

Sofia Vergara plays a gold digging wife who wants the Stooges to kill her rich husband.

To be fair, the Farrellys and their Stooges have studied the masters closely. The film speed is adjusted, the cartoonish noises are dead-on and Sasso and Diamantopoulos can do passing impersonations.

The problem is by modernizing the Stooges, their charm diminishes.

The Farrellys, or someone claiming to be them, do offer a funny coda at the end. If they really love the Stooges the way the rest of us do, they should have helped with a restoration project of the original shorts. After all the smacking around they had, Howard, Fine and Howard are entitled to that sort of kindness.

PG for slapstick action violence, some rude and suggestive humor including language