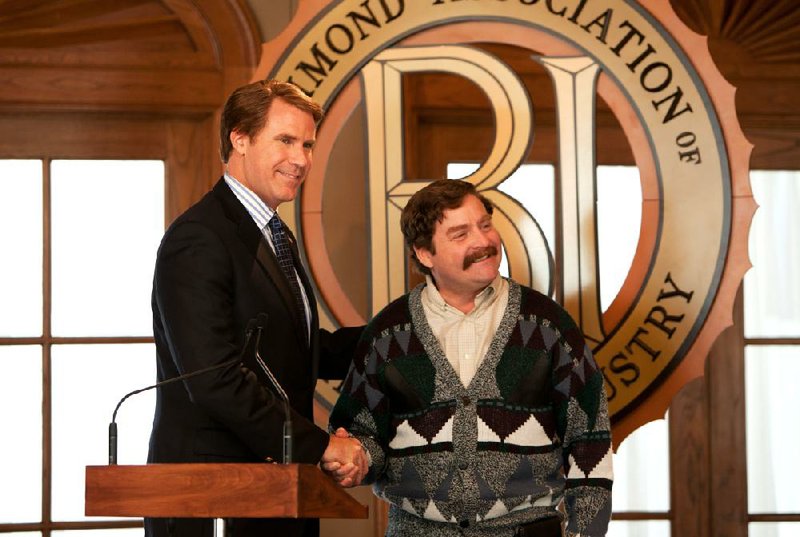 Cam Brady (Will Ferrell) is a longtime Democratic congressman who suddenly finds himself facing some real competition, in the form of Republican challenger Marty Huggins (Zach Galifianakis) in Jay Roach’s The Campaign.

LITTLE ROCK — Uggie, the canine star of The Artist, is such a charmer that he can elevate any film he graces with his presence. He’s in only about five seconds of The Campaign, but he’s more consistently welcome than his human co-stars.

The Campaign itself is political satire that concentrates less on story, characters and insight than in carpet bombing the audience with outrageous, vulgar gags. By sheer volume and force, laughs emerge. You just have to wait for them.

Will Ferrell stars as Cam Brady, a North Carolina Democratic congressman whose seat is practically a throne. From hearing him open his mouth, it’s obvious he’s not being sent back because he’s good at this job. No one else in the district has had the initiative to oppose him.

Cam’s speeches are empty and repetitive. Who knew that every profession in his district represented the backbone of America? He’s also barely capable of doing more than reciting talking points and has a libido that makes Bill Clinton look like a cautious prude.

As Cam’s zipper problem begins to hurt him at the polls, a pair of scheming billionaires named the Motch Brothers (John Lithgow, Dan Aykroyd) decide that Cam’s misdeeds could ruin their plans to bring Chinese labor practices (meaning low wages, pollution and dangerous work conditions) to Cam’s district. They need a new stooge.

Their perfect candidate appears to be the bumbling tourist guide Marty Huggins (Zach Galifianakis), a Republican, whose fascination with his pugs and his enthusiasm for his job (there’s only one tourist a day) seem misplaced.

Eager to please his sleazy, cynical, but well-heeled father (Brian Cox), Marty agrees to throw his hat in the ring even though his unnerving mannerisms will probably get more sneers than votes. At least he cares about his hometown and appears to be a loving father and husband. The rigors of campaigning and the demands of the Motches’ ruthless handler (Dylan McDermott) might change that.

The egotistical Cam could be more like Marty if he could get out of his campaign car, which has his own likeness plastered all over it.

Because tycoons with ill intent are backing both candidates, Marty’s pugs, which Cam dubs “Chinese,” become the hottest issues. The script by Eastbound & Down veterans Chris Henchy and Shawn Harwell takes some well-deserved potshots at campaign finance rules and populist pols who don’t care about the people they represent.

Most of the film, however, rests on a foundation of carnality and broad physical gags. Admittedly, that sort of thing can be guilt-inducingly funny, but not every exposed bosom leads to chuckles. Ferrell repeats his overgrown man-child shtick to mixed results, but Galifianakis manages to show a little range. His eerie persona is tempered by a sweetness his previous roles haven’t demanded.

The Campaign gets some mileage out of mocking how empty modern campaigning can be. It’s a shame that the film itself could have used a little more substance - and not the kind produced by bodily functions.