One year since 3 convicted in West Memphis murders freed 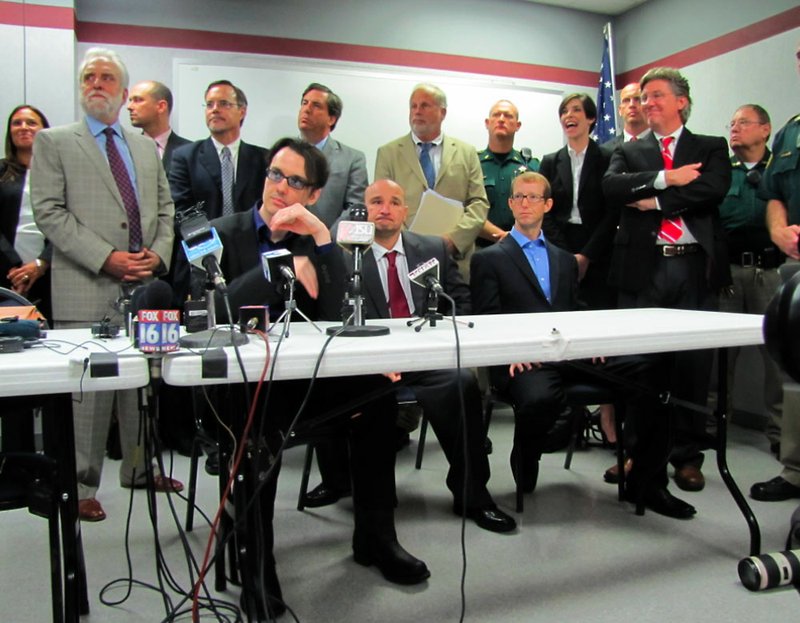 Damien Echols, Jesse Misskelley and Jason Baldwin prepare to speak to the media after being released August 19, 2011, following an 18-year imprisonment in the murder of three boys in 1993 in West Memphis, Arkansas.

Convicted as teenagers in the 1993 murders of three Cub Scouts in eastern Arkansas, the men known by their supporters as the "West Memphis Three" were released last Aug. 19 after years of questions about the evidence in the case and attention from such celebrities as Pearl Jam front man Eddie Vedder and the Dixie Chicks' Natalie Maines. Now, they are trying to move forward while dealing with a new world of iPhones and Twitter as well as their own status as celebrities.

Echols is preparing to crisscross the country to promote his new book, "Life After Death." Baldwin spent time on the set of "Devil's Knot," an upcoming movie about the case starring Reese Witherspoon and Colin Firth. Misskelley has been eking out a quiet life in the trailer park where he grew up near West Memphis.

"My greatest piece of technology as a 16-year-old kid was my Super Nintendo," said Baldwin, who was 16 when he was arrested. "Now I've got this thing called the iPhone."

Their case seemed to be headed for a new trial when the three men suddenly reached a plea deal last year that allowed them to go free and keep proclaiming their innocence. Though they have their supporters and fans, they also have detractors who don't believe the men were wrongly convicted.

"That people would support three convicted child murderers speaks to how sad and deviant the world has become," Todd Moore, the father of one of the slain Cub Scouts, said in a statement.

His son, Michael Moore, and the boy's two friends, Christopher Byers and Steve Branch, were found in a ditch, naked and hogtied with shoelaces in May 1993. They were 8.

The men convicted of killing them are now in their 30s.

Since his release, Baldwin got a driver's license, a part-time job at a law firm and an apartment in Seattle, where he stayed at Vedder's house after he and Echols were whisked away last year. He's traveled to movie screenings and film festivals, met the actor playing him in the upcoming Hollywood adaptation "Devil's Knot," and celebrated Thanksgiving in Amsterdam atop a floating Chinese restaurant.

"I just wake up every day and I'm like, 'Wow,'" said Baldwin, who is taking classes and hopes to earn a law degree.

He doesn't see Echols or Misskelley often. When they do get together, Baldwin said they don't really talk about the case.

Like Baldwin, Echols has been traveling. He headed to New Zealand, where director Peter Jackson had been filming a two-part version of "The Hobbit." In addition to gearing up for his book tour, he's been working on the latest documentary about the case, "West of Memphis," due out at the end of the year.

"All of these things serve the purpose of continuing to put pressure on the state of Arkansas in hopes that they will eventually do the right thing and reopen the case," Echols, who once came within three weeks of an execution date, said in a statement.

Prosecutor Scott Ellington, who agreed to the plea deal, has promised to look at new evidence as it comes in. But he said he hasn't seen anything that would make him consider reopening the case.

Misskelley, who was 17 when he was arrested, is the only one of the West Memphis Three to stay in Arkansas. He lives not far from his father, Jessie Misskelley Sr., who said his son has done a little carpentry work since his release. No one answered the door at the younger Misskelley's home this week.

"Everybody's glad to see him home," his father said.

Baldwin said he worries about Misskelley, whose unexpected confession in 1993 was the big break for authorities investigating the Cub Scouts' deaths.

"I'm scared one day ... I'll see on the news that they've arrested him and they'll say they've got an open-shut case on him for something that he's confessed to, I don't know, shooting Big Foot or something," Baldwin said.

Misskelley, who also implicated the other two in the killings, later recanted. Defense attorneys said he got parts of the story wrong.

Their case might have faded away if it weren't for the 1996 HBO documentary "Paradise Lost: The Child Murders at Robin Hood Hills," which drew the attention of celebrities who helped fund a legal team that sought a new trial.

In late 2010, the Arkansas Supreme Court ordered new hearings amid questions about DNA evidence and witnesses in the case. Then, suddenly, there was the plea deal.

Though Moore thought his son's killers had been set free, other relatives of the victims disagreed.

John Mark Byers, Christopher Byers' adoptive father, said the deal brought him "a lot more peace of knowing that the innocent have been released.

"But then the other side of it is knowing that the guilty (person) is still out there on the loose," he said.