The dregs of August

Hit and Run squashes, flattens and plows the fun right out of its slim premise by DAN LYBARGER SPECIAL TO THE DEMOCRAT-GAZETTE | August 24, 2012 at 3:46 a.m. 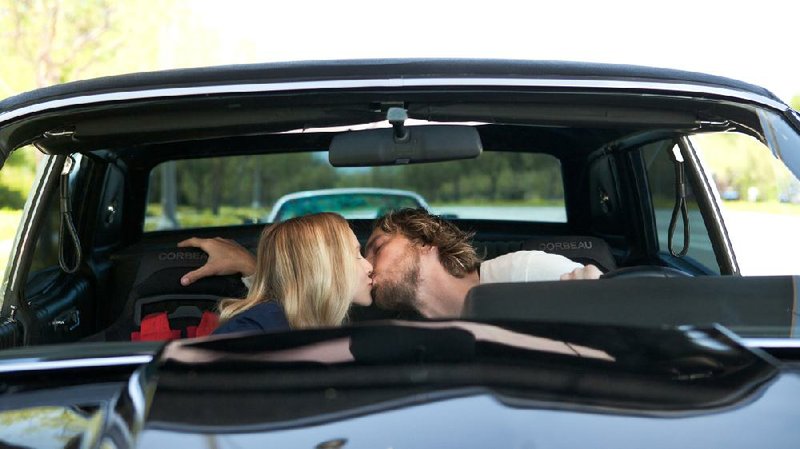 Annie (Kristen Bell) and Charlie Bronson (Dax Shepard) share a tender moment during a brief lull in the action in Hit and Run.

Mark Twain once lamented, “The secret source of humor is not joy but sorrow; there is no humor in heaven.”

Nor is there any humor to speak of in the new comedy Hit and Run, a movie loaded with nudity, drugs, violence, profanity, political incorrectness, sex, peelouts and no fun to speak of.

At the screening I attended, the crowd remained deathly silent, as if they were waiting for a faint but urgent transmission from Radio Kabul. If anything funny came over the airwaves, you’d never know it even though the film is in a lobotomized version of English.

It’s unfair to call Hit and Run the brainchild of its star Dax Shepard. Sure, he wrote it, co-directed it with David Palmer, played the lead and even had a hand in the editing. It’s just that there was little or no brain activity involved with this movie’s creation.

Hit and Run gets off to a clumsy start and sinks from there. Charlie Bronson (Shepard) is trying to console his girlfriend Annie (Kristen Bell, Shepard’s real-life beloved) because she might be losing her job. They have a nice, two-story home even though Charlie has no discernible occupation. Oh, yeah, there is a reason he’s named Bronson. There’s no point in finding out why.

Annie is a college instructor. Why she’s with the undereducated Charlie, other than the con- venience of appearing in her offscreen boyfriend’s movie, we’ll never know. Bell is also a bit young to have acquired the credentials Annie has racked up in the film. Plausibility is one of several things missing in Hit and Run, but it’s only one of a legion of virtues that could have saved the film.

Annie has plenty to be worried about. Her oversharing boss Debbie (Kristin Chenoweth) tells Annie she has to take a more prestigious college teaching job and abandon the small town where she lives.

The sudden announcement is little more than an excuse to set up a series of tepid vehicle chases. Charlie doesn’t want to hold back Annie, but he’s got a good reason to stay away from Los Angeles. He has spent the last few years in witness protection after ratting out the other members of his bank robbing team. Because the leader, Alex (Bradley Cooper), murdered someone during the bungled heist, it’s easy to see why he bailed on the others. Alex is out of prison and out for revenge.

Shepard seems to have recruited every other available character actor in Hollywood without bothering to give them interesting roles. Many seem to be there simply to repay him a favor. Oh, sure, Cooper’s sadistic criminal is eccentric, but he’s not engaging enough to hold anyone’s attention.

Shepard also seems obsessed with rape. While no raping actually happens on screen, the long discussions of date rape and jailhouse ravishing go on as if mere mention of nonconsensual sex was comedy gold.

It’s kind of like listening to 5-year-olds giggling over bodily functions.

Throw in a bit of race baiting to go with the rape quips, and it’s safe to say that viewers can sleep soundly knowing that Hit and Run will never get a sequel. I spent less time caring about the characters and more moments weeping for the helpless money that was deflowered in the making of this abomination.

Print Headline: The dregs of August