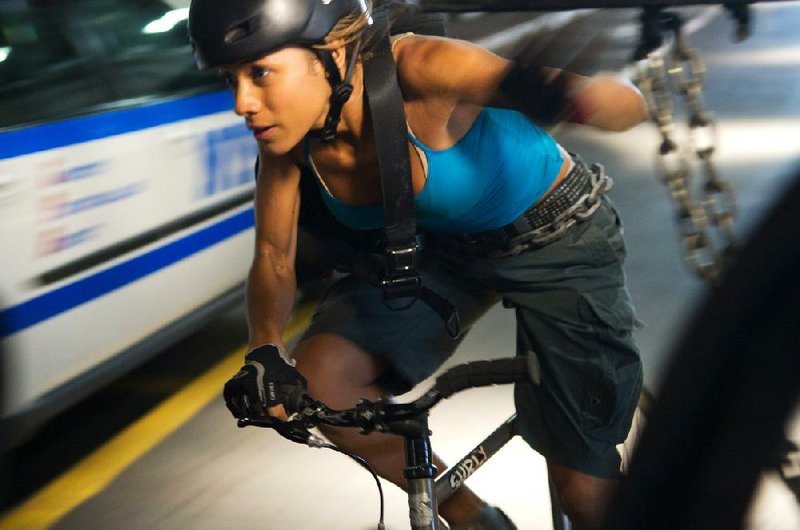 Joseph Gordon-Leavitt does (some of) his own stunts in "Premium Rush." (By Columbia Pictures/Sony)
[View Full-Size]

New York bicycle couriers lead such dangerous lives that it seems it would be possible to make a thrilling movie about them without having conventional villains or plots. Because these folks ignore traffic rules and share the road with vehicles that could crunch them like bugs, thrills should come automatically.

That apparently wasn’t good enough for director and co-writer David Koepp, who has given us better films like The Trigger Effect and Ghost Town. His new movie, Premium Rush, features a courier who has to dodge a fellow determined to commit vehicular homicide and several cops who think his techniques are reckless. Oh, and he still has to deliver his message on deadline.

For Wilee (Joseph Gordon-Levitt), this would seem only slightly more challenging than usual. His bike has been modified so that he doesn’t have to do anything unnecessary like, oh, stopping. Wilee, who’s nicknamed after the famous cartoon coyote, has removed the brakes.

Frankly, he’s happier dodging open cab doors than he is dealing with the other stresses in his life. His girlfriend, Vanessa (Dania Ramirez), is frustrated with him. She wants to do something other than trying to outrun bicycle cops, while he can’t think of doing anything else. He also has a “frenemy” named Manny (Wole Parks) who regularly interferes with his orders.

Wilee’s latest delivery is in a small, thin envelope, and his client (Jamie Chung) insists that he deliver it to a Sister Chen in Chinatown before 7 p.m. Before Wilee can start pedaling, a tall, intimidating man who identifies himself as Forrest J. Ackerman (Michael Shannon, Take Shelter) demands the contents of the envelope.

This is against company policy, so Wilee rides off. He doesn’t have to know much about science fiction (Google Ackerman’s name) to know this guy is not on the level. Ackerman may not be authorized to have the package, but he drives like a maniac in his car trying to get it from Wilee.

Because the villain is played by Shannon, it’s a safe bet that he’s teetering on the edge of insanity. Shannon’s over-the-top turn is silly and oddly mesmerizing. At times, it’s hard to take him seriously, but his whole-hearted investment in this homicidal loon keeps the film from grinding to a halt.

Koepp keeps the pace as hyperactive as Shannon’s performance and uses lots of quick cuts and dynamic camerawork to simulate the feel of trying to get through Big Apple traffic on a bike. To keep the movie from feeling too programmed or formulaic, Koepp and coscreenwriter John Kamps tell the story out of order. This helps fill in some narrative gaps, but other stylistic touches seem like cheap gimmicks. At intersections, Koepp treats viewers to scenes where Wilee gauges traffic to determine how best to cross. At first, it’s a great way to toy with audience expectations. After five or six times, it gets as tiresome as waiting for traffic signals to change.

As a result of sequences like these, many of the intended jolts in Premium Rush often generate more giggles than shrieks. During the end credits, Koepp includes some video of a bloody Gordon-Levitt walking away from crashing into the window of a taxi. The actor went a little too “method” for that scene. It’s a reminder that embellishments sometimes make viewers forget the danger instead of feeling it.