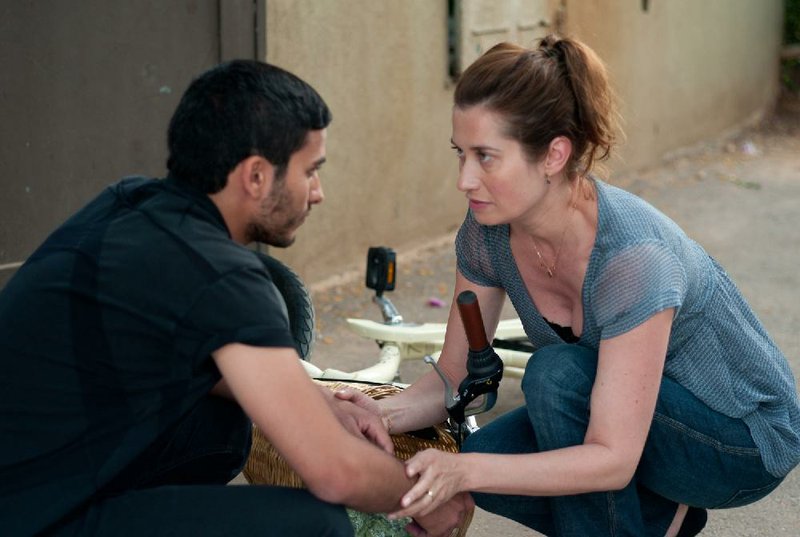 Yacine (Mehdi Dehbi) is a young Palestinian man who finds out his birth mother (Emmanuelle Devos) is a Jewish doctor living on the other side of the wall separating the occupied West Bank from Israel in Lorraine Levy’s The Other Son.

LITTLE ROCK — While the central conceit of French writer-director Lorraine Levy’s The Other Son may seem a bit cheesy - the hoary “switched at-birth” trope has been used by everyone from Shakespeare (in The Comedy of Errors) to Mark Twain (Pudd’nhead Wilson) to throngs of desperate soap opera writers - the film is redeemed by fine performances and an uncommon emotional honesty.

Set in Israel’s Gaza strip, the film tells the story of two families, one Palestinian and one Israeli, living on either side of the wall separating the occupied West Bank from Israel. When 18-year-old Israeli Joseph (Jules Sitruk, Monsieur Batignole) takes a blood test as a prerequisite for his compulsory service in the Israeli Air Force, the lab notifies his French-born physician mother Orith (Emmanuelle Devos) that her husband, Army officer Alon (Pascal Elbe), cannot possibly be Joseph’s father.

The first order of business for Orith is to convince Alon that she was not unfaithful to him. Once that’s done, the couple must decide how to handle the realization that the boy they raised as their son is a biological stranger - at first they can’t bring themselves to tell Joseph the truth.

It’s left to the doctors in Haifato explain: During the 1991 Persian Gulf War, an Iraqi missile attack effected the evacuation of the clinic where Joseph and another baby were being held. In the chaos, the infants were inadvertently exchanged. Orith and Alon’s biological son - now named Yacine (Mehdi Dehbi) - was raised by a Palestinian couple, Said Al Bezaaz (Khalifa Natour (The Band’s Visit) and Leila (Areen Omari).

The political implications are enormous - tellingly, the overriding concern of the males involved seems to be that one of their own was raised by “the other side,” while the more pragmatic mothers seek reconciliation with their lost offspring.

But the potential for melodramatic bombast is undercut by the essential decency of both families - though Alon is a military man, he is no stereotype. There is a well-earned scene where the fathers, after an initial burst of hostility, wordlessly sip coffee together in a cafe. Said and Lelia’s younger son, Bilal (Mahmoud Shalaby) has a more violent reaction, he rejects his “brother” as a Jewish occupier.

Both families are able to find some commonalties - though the Israelis are better off, the Palestinians aren’t exactly poverty-stricken - Yacine is a pre-med student in Paris.

And Joseph doesn’t mean to follow in his presumed father’s footsteps: For him the military is just an obligation to meet - he is a musician like Said.

Also all of the principals speak French except for Said and Bilal - a subtle but perhaps not insignificant point given that the writer-director is French. This removes them slightly from the typical Israeli-Palestinian dynamic - by making the families more worldly, Levy makes it more plausible that they might see beyond the narrow identity politics of the situation. The film is hopeful in that neither Joseph nor Yacine seem particularly devastated by the revelation - though it raises some interesting questions. Suddenly Joseph is not Jewish, but Yacine is. But years of love and nurturing cannot be summarily dismissed.

Somehow Levy - and her actors - avoid sentimentality and trite homilies. The Other Son explores the age-old nature vs. nurture divide, and ends up as refutation of ignorance and hate.

Print Headline: The Other Son