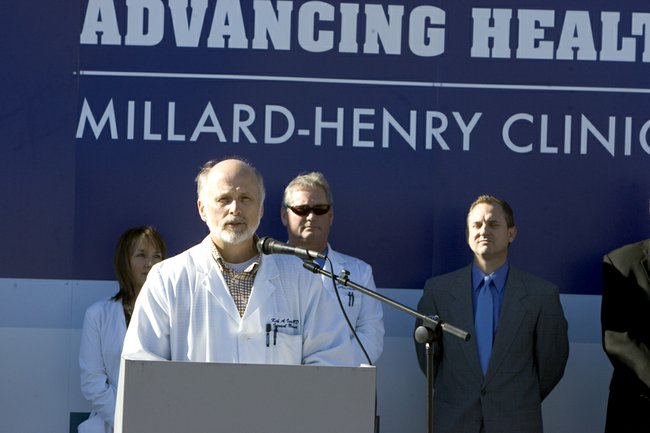 RUSSELLVILLE — Health care providers in Russellville aren’t waiting to see what the trends are; they’re setting the curve, said Rodney Haynes, director of the Millard-Henry Clinic.

The physician-owned clinic, an affiliate of Saint Mary’s Regional Health System in Russellville, held a groundbreaking Wednesday for a $7 million, 47,000-square-foot, three-story medical-office building adjacent to the existing one on Skyline Drive.

“We’re building a more robust health system with each day that passes,” Haynes said. “Doctors have stepped up and agreed to build a new building. This is something we had a vision to do for a number of years; it finally came together.”

A group of physicians within the clinic are financing the construction, and Saint Mary’s Health System will lease the building for them to occupy.

“Both parts of the critical aspects of care are working together to build a better system,” Haynes said.

Dr. Vickie Henderson, an obstetrician/gynecologist and president of the clinic’s executive committee, said the new medical-office

complex will be the largest in the River Valley region.

The current Millard-Henry Clinic has 28,000 square feet. The 40-year-old building hasn’t had any significant improvements during that time, Haynes said.

The facility wasn’t attractive to some physicians, so the new complex will be a good recruiting tool, Haynes said.

The clinic has 19 physicians now, and the new facility will have room for 30.

Including the physicians recruited so far, the complex will be 90 percent full when it opens, said Brenda Harrison, director of community relations and marketing.

The clinic will house pediatrics, internal medicine, family practice, orthopedics and general surgery, along with advanced laboratory and radiology services. A walk-in clinic will be available without an appointment for same-day care of non-life-threatening illnesses and injuries.

“It’s not just a building — it’s going to be an improvement in every area,” Haynes said.

When the new building is completed in about a year, officials said, the surgery department will move out of the current OB-Gyn clinic and locate in the new facility. The obstetrics and gynecology practices of Millard-Henry Clinic will remain in the building at 105 Skyline Drive, and the space will be dedicated exclusively to women’s health services.

The old Millard-Henry clinic at 101 Skyline drive will be razed, and that area will be used for parking.

“Our physicians are key,” said Donnie Frederic, CEO of the hospital. “They had the vision to build this building and come together with the hospital to get it financed. We’re really pleased that this is going to happen.”

He said community members are excited about the new facility, too.

Haynes said the project is also significant because it shows the region’s residents that health care providers in Russellville are “progressive, proactive, forward-thinking.”

Henderson said the clinic provides “the very best doctors who are going to provide the very best medical care.”

“The facility matters, but the bottom line is what’s delivered,” she said. “We want to provide state-of-the art medical care that you would not have to go anywhere else to get any better care in a nicer facility where patients feel like they matter.”

Jeff Pipkin, president and CEO of the Russellville Area Chamber of Commerce, said the health care community makes an impact on economic development in many ways.

“It’s really hard to put it in words. Anytime you have a clinic the size of Millard-Henry in your community, and it is continuing to grow, it is an understatement to say it is a boost to the local economy,” Pipkin said.

Pipkin said he can speak from experience — having lived in seven other Arkansas cities — that Russellville’s strong medical community is unique.

“Until you live somewhere that doesn’t have that quality of care, you really have a hard time appreciating it,” he said.

“From a recruiting standpoint, whenever we’re recruiting industry to the area, the medical community in this region of the state is a bright, shining star,” Pipkin said.

Millard-Henry Clinic was founded in 1945 by two doctors. Along with the main campus in Russellville, the clinic has offices in Dover and Atkins.

Through its network with Saint Mary’s and Capella Healthcare, specialties and offices include Cardiology Associates, Urology Associates and Valley Health Serves in Hector.

Niche Publications Senior Writer Tammy Keith can be reached at 501-327-0370 or tkeith@arkansasonline.com.