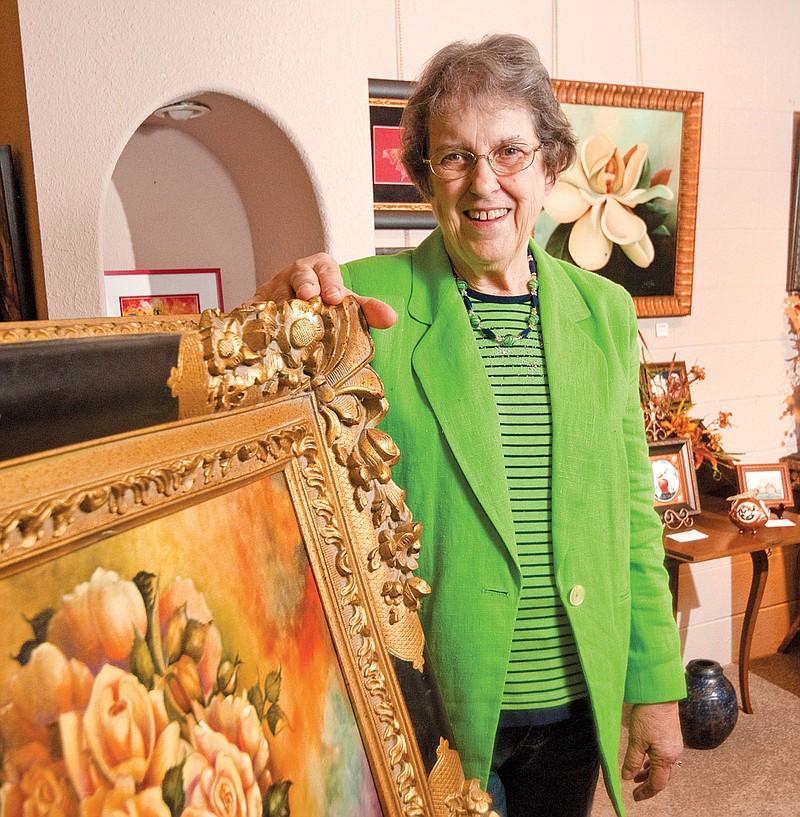 Jo Ann Diffee is an artist from Bismarck who runs a gallery that includes her work and the work of several other artists.

In a brick building that used to be the post office in Bismarck, Jo Ann Diffee displays some of her life’s work, along with the work of some of her friends and colleagues, and those works are for sale.

Diffee’s gallery on Arkansas 7 in the Hot Spring County community offers all kinds of art objects, including portraits on canvas, pottery, jewelry and one doll. The quality of the art draws attention and generates enough sales that she has operated the gallery for 10 years and has plans for things to stay that way.

To say that the 69-year-old Diffee is an artist is talking about a lot more than her profession. Being an artist defines her spirit and is the way she defines herself.

“I always wanted to be an artist,” she said. “I never seemed to have actually decided that; God just made me that way.”

Diffee often speaks of the artist within her, almost as if it is a second being or, as she mentioned once, God moving with her when she has a brush in her hand.

There was a time in her life, just after high school, when she thought it would be impossible for her to be an artist, so she started college with the goal of becoming a teacher.

That move was supported by her mother, whom Diffee called her best friend and biggest influence.

“She had no doubt that I would become an artist and always encouraged me,” Diffee said.

So without any formal art school, she read books about painting and studied later in life with other painters, who taught her some techniques about color and form, and some even more important lessons.

“One good artist, Bob Erwin in Hot Springs, taught me to slow down,” she said. “I used to be very impatient and would work hard and fast, and he stopped me from doing that.”

However, those lessons came much later for Diffee, who thinks her early life may have influenced her artistic nature by letting her see so much.

“My father was in construction, and we moved around the country during my childhood,” she said. “While I was born in Fendley, on the other side of Lake DeGray from Bismarck, I attended 13 schools before I went to high school.”

She said many people are surprised when she says she enjoyed the way her family moved around.

“That way I got to see many different things, like the trees and rivers of Oregon, sunsets in the desert, the fall colors of Indiana and deep snowfalls,” Diffee said. “Maybe seeing all that helped me become an artist, and of course, the artist inside me always moved with me.”

The family settled in Blythe, a farming community in the desert of southern California along the Colorado River. Diffee attended high school there and married her first husband there. She calls the area her half home.

Diffee became a “professional” artist soon after she left college when she began to paint what she called “8-by-10s of fuzzy animals” that she sold at first to raise money for her supplies.

“I sold them to friends and to people who knew me,” she said. “Then when my husband was with the Air Force, so many of the wives were getting pregnant, they were buying the paintings for their nurseries.”

“I did a lot of paintings of homeplaces for $50 each. I thought I was getting rich,” Diffee said. “I painted so many pictures of houses, I got sick of them.”

Along the way, she began to paint portraits of children and some adults and had a successful career as a portrait artist for more than 30 years.

“I painted lots and lots of children,” Diffee said. “I did some professional people, you know, for offices, but I like painting children better than anything else I have done. They are so fresh and honest.

“I have to tell the adults I painted, ‘Let me see the real you,’ but I don’t have to say that to children. They are already themselves all the time.”

Diffee agreed with the comment that every portrait is an example of impressionism because her painting reflects her impression of the person’s personality.

“I don’t know how it happens, but it does,” she said. “Look at a good portrait, and deep down you like or dislike the person because it reflects their personality.”

When it came to painting children, she said she tried to make an accurate likeness of the children, but it often didn’t match the parents’ perception of their youngster.

“These children are almost perfect to their parents,” Diffee said. “I remember once painting a girl who had pretty, but thin, hair, and her parents said, ‘But her hair is so much thicker.’ It wasn’t, but I had to go back and add in more hair.”

For some reason, she said, it is easier to see family resemblances in a painted portrait. There is a painting in her gallery of a young woman siting in a chair.

“When she first saw it, she said it looked like her aunt,” Diffee said. “I and her friend, who had come along to see it, told her it looked just like her, but it took her a few days because she could see her aunt, not herself, in the picture.”

“Sometimes I would be booked two years out,” she said. “I would finish a painting one day, then start another the next.”

During this time, she returned to southwest Arkansas, but it was not her idea.

“We still lived in California, but we came back to Arkansas to visit my parents once, and my husband loved it. He said that when he got out of the Air Force, we would move here.”

They moved back in 1965, and her first husband died in Arkansas in 1973. She later remarried. After all those years of moving, she has become a real homebody. She said the gallery is less than three miles from her home and less than a mile from her studio.

“I opened the studio in the early 1980s doing portraits,” she said. “I hired a carpenter, and I was the helper. I designed the studio to be just right for me.”

For a while after moving to Bismarck, she and a friend owned a craft shop in Bismarck, and they did tole painting — a folk-craft style of painting on items like saws or other metal or wood.

“It is a simpler kind of painting than fine art,” Diffee said.

She has tried all kinds of art mediums to express her inner artist. She makes jewelry, painted in oil and water color, has sold pen-and-ink drawings and made pottery.

“I wanted to explore new things, and I would try them, but I would get bored and return to painting.”

She is now painting portraits on porcelain tiles or china. She said it is a very different kind of work.

“Painting on canvas and on porcelain is like the difference from riding a bicycle and driving a train,” Diffee said. “On canvas, you can mix and layer the oil paint, but on porcelain, it doesn’t dry until you fire it, and it can take 12 layers to get the color saturation you want.”

However she seems to have gotten the process down. She recently entered a portrait of a young woman on tile in a statewide show and won Best of Show.

“I was siting in my chair and almost fell over,” Diffee said. “It was only the seventh time I had painted on porcelain.”

Diffee said she concentrated for several years on becoming a well-known artist.

“My work was in a gallery in Little Rock and around the country,” she said. “But I realized there were so many artists, and I didn’t like making the rounds of the shows and exhibitions, and I decided to pull back and open my own gallery.”

She said she continues to learn about art, even after all her success and experience.

“It seems I learn something every time I pick up a brush,” she said. “And I always want to know more and try new things.”

Yet, she also said she has now decided to slow down and enjoy life more.

“Having the gallery on the road between Hot Springs and Lake DeGray, I see a lot of tourists coming through. I’ve met people from around the world.”

Her gallery offers several landscape paintings of local scenes, which are popular with her customers. She said she never paints on-site, but remembers what she sees.

“It allows me to make the painting correct enough so that you can recognize the place if you have been there,” Diffee said. “But it still meets the artistic license to make changes that please the artist inside me.”