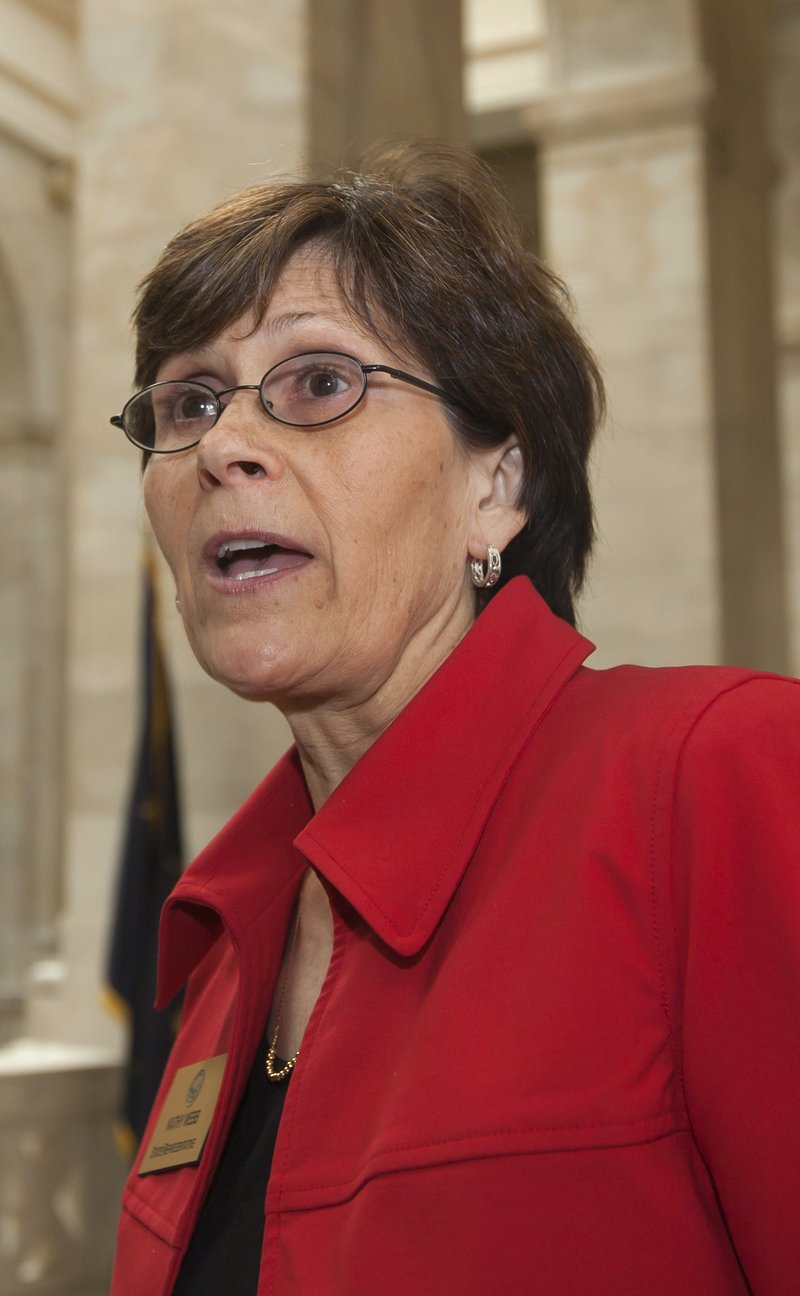 LITTLE ROCK — House Budget Committee Chairman Kathy Webb, D-Little Rock, said Thursday that she’s confused and frustrated that the House Republican leader proposed a budget that provides $21 million less than the governor’s budget, rather than working through the process for a single, bipartisan version.

House Republican leader Rep. John Burris of Harrison filed House Concurrent Resolution 1008 on Monday to allow a budget alternative to the $4.72 billion general-revenue budget for fiscal 2013 that Beebe proposed. The Legislature’s Joint Budget Committee, in developing its version, is using the governor’s proposal as a base.

The main funding mechanism for the general-revenue part of the state budget is called the Revenue Stabilization Act, enacted annually. It says how much general revenue will be distributed to state agencies.

Governors and legislative leaders usually negotiate over that legislation behind the scenes, usually among members of the dominant political party, which historically has been the Democratic Party. Talks go on throughout a session until a more or less settled version emerges near the end, presented as ready for ratification by the full House and Senate.

Webb said she is confused as to why Republicans chose to propose their own version instead of working within the normal process, which includes amending the Joint Budget Committee’s version.

“Everybody who wants to put forth ideas about where to cut the budget should do that, but it seems kind of like a line is being drawn in the sand,” Webb said. “I’m just not sure why they would choose to introduce that much partisanship into it.”

“It is responsible to start a debate and have a debate that tries to actually change where we end up,” Burris said. “Debate is not partisan, no matter how much people would like to characterize it as such.”

The 2012 fiscal session began Monday. During a fiscal session, a lawmaker who wants to introduce a nonappropriation bill is required to get the Legislature to adopt a resolution by a twothirds vote allowing the bill to be introduced. The two-thirds is 67 votes in the 100-member House and 24 in the 35-member Senate.

The Joint Budget Committee resolution asking lawmakers to consider the Revenue Stabilization bill is waiting for a vote by the full House, but House leaders say they don’t have the votes to pass it. Burris’ resolution is in the House Rules Committee. Its next meeting has not been scheduled.

A 3 percent cut under the Republican plan would apply to 11 departmental areas of the budget, as well as about 50 smaller agencies listed under the single budget heading of miscellaneous agencies.

“On some of those smaller agencies, I think it would have a devastating impact,” Webb said. “I think people are going to be very surprised when they see how many jobs we would cut, how many programs we would cut.”

Webb said she has been through some of the agency budgets that would be cut and hasn’t found a budget she would be comfortable cutting.

Burris said the House Republican caucus has been looking at possible changes in Beebe’s proposed budget for a few weeks.

“It’s not random or arbitrary. We’ve been working on this for a while,” Burris said. “Three percent does not have a devastating impact. We think those savings are there. If Rep. Webb suggests that there are devastating impacts of the 3 percent cuts, she should show those, too.”

Webb said she first learned of the specific cuts Burris wanted to make Wednesday. She said that neither Burris nor other members of the Republican caucus approached her about potential cuts before the session.

The governor’s budget already proposes less for the Department of Health and the miscellaneous agencies than the departments received in fiscal 2012. The Republican budget cuts on those agencies would be on top of the amount proposed by the governor.

The largest part of the $21 million reduction comes because the Republican plan uses general revenue of only $100 million, rather than Beebe’s proposed $114 million, for the general-revenue increase for Medicaid. Burris said the $14 million difference would come out of the current state surplus.

That was a stumbling point for some lawmakers.

Bookout said he needs to know what effect the proposed cuts would have.

“Just throwing numbers out there is one thing, but those numbers turn into real people and real services,” he said.

Beebe said the Medicaid part of the Republican proposal was a “huge issue” for him because of a $200 million to $250 million shortfall in fiscal 2014 projected by the state Department of Human Services.

“Medicaid is not a one-time program. All you’re doing is exacerbating that shortfall from $270 [million] to $284 [million] a year from now. And that’s real problematic,” he said.

Burris said the shortfall will mean more severe cuts for state agencies in the future and cutting some budgets now will prepare them.

The plan lets each agency determine where to cut, and Beebe said he has asked agencies to show him how they’d do that. He said he’ll look at their plans and likely have a response to the proposal by Tuesday.

Agencies contacted Thursday said they are looking over their budgets and figuring out where they’d make cuts.

“We will be talking to legislators over the next few days discussing which efforts to attract jobs to the state of Arkansas they would like to diminish,” said Scott Hardin, a spokesman for the Arkansas Economic Development Commission.

Richard Davies, director of the state Department of Parks and Tourism, said the cuts would likely mean, among other things, “adjusted operating hours, days and personnel levels” at state parks.

Ed Barham, a spokesman for the state Department of Health, said most of what the department gets from general revenue goes toward personnel and a cut would mean fewer jobs, including at the county level. The department is still looking into how many jobs would be cut, he said.

Lawmakers said they got their first look at the Republican proposal Thursday. They return to the Capitol on Tuesday to continue the session.

House Speaker Robert Moore, D-Arkansas City, said he will look at Burris’ proposal and meet with the governor next week.

“Republicans wanted to be heard in the process, and they had an opportunity to be heard,” he said.

Senate leaders said they have ideas of their own.

Sen. Larry Teague, D-Nashville, in line to be Senate president pro tempore in 2013, said, “I would have to assume that there is some fat that could be cut. I don’t know how you figure where it is at though.”

Senate Budget Committee Chairman Gilbert Baker, R-Conway, said the Senate, House, Beebe and Burris have ideas about what the Revenue Stabilization Act should look like, as does he.

A day after Burris described his list of proposed cuts as a House and Senate Republican proposal, Senate Republican Whip Michael Lamoureux of Russellville said he “supports the process that [Burris] is going through of looking for additional cuts.”

The Joint Budget Committee recommended approval of bills to give supplemental appropriations from surplus funds to the Forestry Commission and the Department of Community Correction.

Senate Bill 126 would give $2.666 million in surplus funds to the Forestry Commission to help the commission get through the rest of this fiscal year and to repay federal grant money that was improperly used, according to administration officials.

House Bill 1156 would give $1.9 million in surplus funds to the Department of Community Correction for evidence-based practices, reduction of caseload assignments and support for drug courts.

The House voted 81-15 on House Concurrent Resolution 1009 sponsored by Rep. Larry Cowling, D-Foreman, that if approved would allow consideration of a bill to repeal a salestax exemption that the Legislature enacted in 2011 for truckers. The exemption was approved in exchange for the Arkansas Trucking Association’s support for a 5-cents-per-gallon diesel tax increase proposed ballot issue. The association withdrew its support for the diesel tax increase.

A proposal from House and Senate Republicans would give some agencies 3 percent less in their budget than what the governor proposed for fiscal 2013.

The Department of Arkansas Heritage, $186,108 less

The Department of Higher Education, $93,000 less

The Department of Economic Development, $309,354 less

The Department of Environmental Quality $126,319 less

About 50 smaller agencies listed under the single budget heading of miscellaneous agencies. $2,820,705

The governor decides how to allocate money between the smaller agencies, which may have other funding sources. They are:

Department of Finance and Administration — Violence Against Women

State Board of Election Commissioners

*Under the Republican plan, Medicaid would only receive a $100 million general revenue increase, instead of the $114 million increase recommended by Gov. Mike Beebe. Republican leaders say the remaining $14 million would come from state surplus.