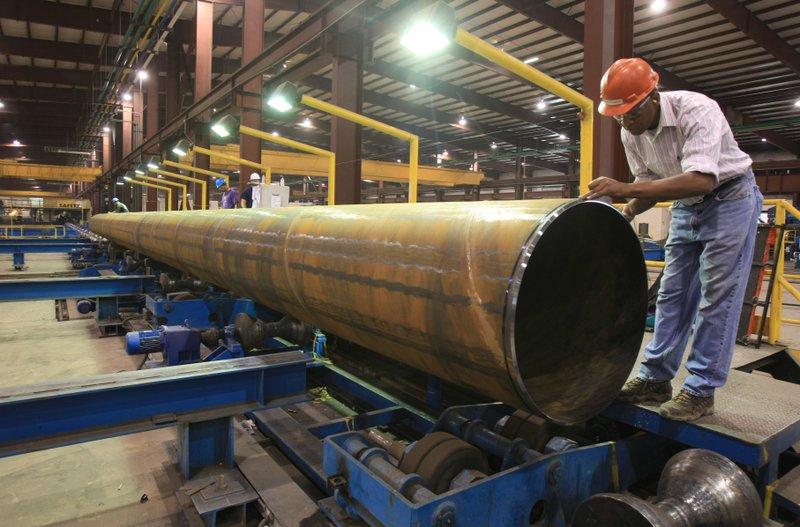 Joseph King measures the circumference of a pipe at the Little Rock Welspun facility in Little Rock.

LITTLE ROCK — Welspun on Thursday announced a second major expansion in Arkansas that will add 200 jobs and a $100 million investment in Little Rock.

After opening adjacent to the Port of Little Rock in 2009, the company expanded in 2010, adding 230 jobs and investing $30 million in the facility. The latest expansion would bring to local workforce to more than 700.

Welspun Tubular president David Delie said the company will produce small-diameter piping in a second building to be constructed on a new 44-acre site.

"I believe with this $100 million investment, Welspun will position Little Rock as an important player in the global pipeline industry," Delie said.

Rajesh Chokhani, vice president of commercial & business development, said the investment would come in two phases: one of $70 to $75 million to be completed by the end of this year and a second beginning after the first is completed.

He thanked the city and state for delivering a "great workforce and all the resources" needed for production.

"We are really proud to call Little Rock home and are excited about our future in this great state," Chokhani said. "While we have invested millions in this state, we feel that we have also received a great deal by being part of this great community."

Gov. Mike Beebe, who formally announced the deal at a news conference Thursday at the Little Rock Regional Chamber of Commerce, praised the company for bringing economic development to the state.

"Welspun invested in Arkansas when the national economy was in bad shape," Gov. Mike Beebe said. "That faith in our workforce and our business community has paid off for both Welspun and Little Rock, and today they are reinforcing their confidence in us with another significant investment in Arkansas."

Beebe said the state offered several incentives, including about $4.5 million in Community Development Block Grant funds for site preparation, building and infrastructure development. The state also offered $300,000 in training reimbursement and a sales tax refund on some construction materials.

Beebe said it's imperative to offer incentives to attract new businesses and expand existing ones.

"It is in no small measure a reason why we've withstood this recession better than most," he said after the new conference.