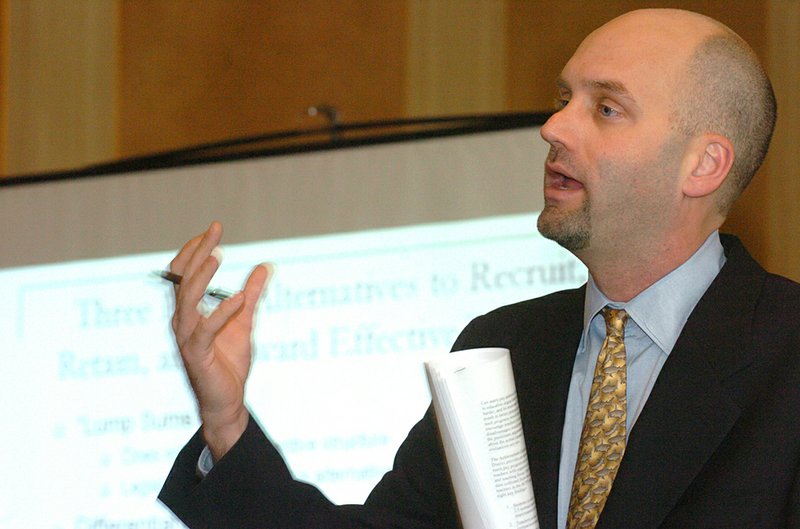 “I’m cautious about just ranking and making any assumptions about school effectiveness,” Gary Ritter, shown in 2007, said of the Iowa Test results.

LITTLE ROCK — There is more than one way to look at the results from a standardized test, such as the Iowa Test of Basic Skills.

Gary Ritter, who holds the 21st Century Endowed Chair in Education Policy at the University of Arkansas at Fayetteville, urges delving deeper into the school-byschool scores earned by Arkansas students in the spring of 2011.

“The results are very important, but it’s also good to take into account the context - meaning the kids the school serves,” Ritter said, adding that a listing of the state’s schools from highest-performing to lowest-performing on the Iowa Test “is darn close” to ranking schools by the socioeconomic status of the students in the schools.

Schools that serve moreaffluent students and havesmaller percentages of students eligible for free and reduced-price school meals tend to have higher percentile rankings than schools with a preponderance of students from less-affluent families.

“We have lots of schools that are serving highly disadvantaged populations. Just on the raw scores, they may not look that good. But they may be doing a great job given expectations and where their kids start and those sorts of things. We would never know that if we just looked at raw numbers.”

To make better judgments about school effectiveness, a comparison of a school’s academic performance to that of similar schools in terms of grade configuration and student poverty level is morerevealing, he said.

The Office for Education Policy, headed by Ritter, did that comparison, using high-, middle- and low-poverty categories for primary, elementary, middle and junior high schools.

The analysis revealed schools that not only had strong percentile rankings but also scored above average when compared with schools similar in terms of grade structure and socioeconomic status.

It also showed schools that didn’t score up to the levels of their peer schools.

The 329-pupil Hector Elementary School scored at the 65th percentile, which was 10 points above the mean or average for schools similar to the Hector campus.

Greenbrier Eastside Elementary School pupils in the Greenbrier School District also scored at the 65th percentile - equal to or better than 65 percent of the test-takers in the nation - but 2 points lower than the average for Arkansas schools of similar structure and poverty level, according to the Office for Education Policy study.

Forty-five percent of the 541-student enrollment at Greenbrier Eastside qualified last year for subsidized school meals, according to data compiled by the Office for Education Policy.

“You might have a school where there is positive change [in achievement] but they may be at a low percentile ranking,” Ritter said. “They may not be where they want to be, but at least they are moving in the right direction,” he said.

And the same applies to high-performers, he said.

“How is a school doing on status, and how is it doing in growth? If a school has good point-in-time scores, I still want to know ‘Are they growing or at least staying steady?’ I want to be sure that is happening.”