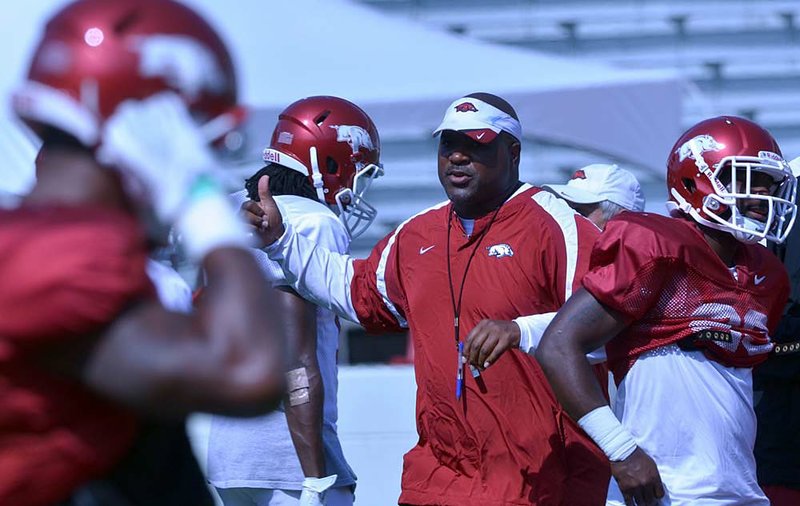 University of Arkansas assistant coach Reggie Johnson works with the team during practice Monday afternoon at Razorback Stadium in Fayetteville.

Johnson will be the Blazers' defensive coordinator after spending the last four years at Arkansas. The 42-year-old had coached under Razorbacks coach Bobby Petrino eight of the last nine years, having spent five seasons at Louisville prior to his time in Fayetteville.

He was one of eight assistant coaches announced Thursday at UAB. The staff has significant ties to Petrino and his brother Paul. In addition to the three former Arkansas assistants hired, McGee announced Joe Gilbert as offensive coordinator and Jeff Brohm as quarterbacks coach.

Gilbert and Brohm had spent the last two seasons at Illinois, where Paul Petrino was offensive coordinator, and Brohm played for the Petrino brothers at Louisville.

"This is a staff that can compete in any setting in the country when it comes to developing kids, teaching them football and then getting them out there in a position to perform at their best while making adjustments on game day to win games," McGee told The Birmingham News.

Owens (tight ends) and Sharp (safeties) had spent the last two seasons as graduate assistants at Arkansas. Like Brohm, both played for Petrino at Louisville.

“Any time someone has opportunity to take the next step in their career and do what they feel is right for their family it is a great thing for them," Petrino said in a release. "Reggie has been an assistant during each season I’ve been a collegiate head coach and I am grateful for his hard work. Richard Owens and Brandon Sharp both played and coached for me and they are two young men who have bright futures ahead of them.

"All three coaches are very familiar with the schemes and philosophies Coach McGee wants to incorporate. I am hopeful they are able to take the principles they helped to put in place here as they build the program the right way together in Birmingham. I wish them all nothing but success.”

Johnson is the fourth full-time assistant coach to leave the Razorbacks' staff since the end of the regular season. In addition to McGee, special teams coordinator John L. Smith was hired as head coach at Weber State and defensive coordinator Willy Robinson resigned prior to Arkansas' win over Kansas State in the Cotton Bowl.

The Razorbacks did not lose any assistant coaches following the 2010 season.