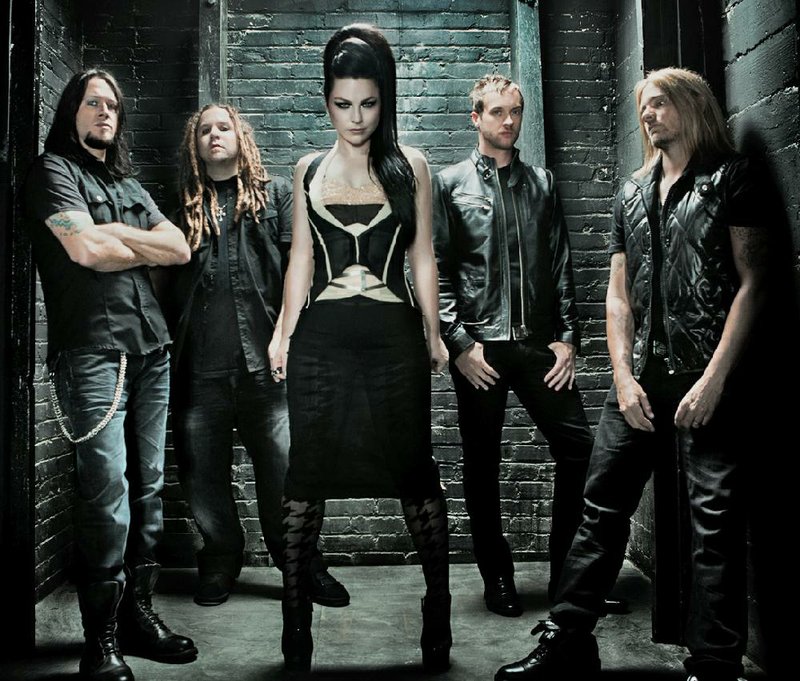 LITTLE ROCK — Having chosen the name Evanescence, it’s a bit of a surprise that the band is still around. After all, a quick check of an old paperback copy of Webster’s New World Dictionary reveals the word “evanescent” means “tending to fade from sight; fleeting; ephemeral.”

Yet the band, which came together in Little Rock in 1995, is still together, thanks to its leader, Amy Lee. It will perform Saturday night at North Little Rock’s Verizon Arena.

“That was one of the coolest things we’ve ever been asked to do,” Lee says from a tour stop in Tampa, Fla. “I designed a special dress and the guys in the band all wore suits and we were all nervous, playing for those three women who were being honored. That was an inspiring, humbling experience.

“But I love it when I get to come back to Little Rock and see family and friends. I can breathe again there.”

Singer-songwriter-pianist Lee and the band released their third studio album, a self-titled CD on Oct. 11. The album, powered by the first single, “What You Want,” debuted at No. 1 on Billboard magazine’s Top 200 Albums chart, and on the iTunes Rock chart. The band performed in 14 American cities and 11 European venues before pausing for the Christmas holidays. A video for the new album’s second single, “My Heart Is Broken,” will be released later this month.

Despite the song’s title, her heart is in good shape, Lee reports. She turned 30 in December and has been married to a longtime friend, Josh Hartzler, since 2007.

“We’ve lived in New York for about six years,” she says. “Josh went to Arkansas Baptist College for a while, and is a mental-health counselor. Now he’s involved with a couple of nonprofit organizations so he can spend more time with me, since what I do is not a 9-to-5 thing. It’s more of a 5-to-9 schedule.”

Lee took lessons for about a year to learn to play the harp and features the instrument on a couple of the new album’s songs. She says she enjoys the challenge of learning something new.

“I did it just for fun because it’s so cool to learn a new instrument,” she says. “It was like when I took piano lessons a long time ago, I guess. I don’t think I’m ever going to have a problem finding things to write about, no matter how happy I am, since when you look around, the world is broken in so many ways.”

After playing in North Little Rock, Evanescence will make its way to Mexico and then go on to Asia for what Lee describes as the band’s most extensive tour there ever.

“We’ve played Japan before, but that’s all, and now we’re going to China, Singapore, Malaysia and the Philippines, and then on to Australia,” she says. “I’ve got so many places booked in my head, also, and for me, I’ve already gotten to see a lot of the world. It’s all about adventure and the feeling of seeing people all singing along to our songs even though they don’t speak English.”

The group has sold more than 23 million records since debuting in 2003 with Fallen, which was powered by the hit single, “Bring Me to Life,” which also was featured on the soundtrack of the movie, Daredevil. The band went on to win two Grammy Awards in 2004: Best New Artist and Best Hard Rock Performance. In 2006, Evanescence released its follow-up, The Open Door, with its hit single, “Call Me When You’re Sober.”

Lee, the only remaining original member of the band, is accompanied by Terry Balsamo on guitar, Troy McLawhorn on guitar, Tim McCord on bass and Will Hunt on drums.

Lee started the band with guitarist Ben Moody. They recruited bassist Will Boyd, guitarist John LeCompt and drummer Rocky Gray. The exodus began with Moody, who left in 2003, followed by Boyd in 2006 and LeCompt and Gray in 2007. The new lineup was gradually shaped when Balsamo, formerly of Cold, replaced Moody. Mc-Cord, who had played guitar in Revolution Smile, switched to bass to replace Boyd. Hunt and McLawhorn left Dark New Day as replacements for LeCompt and Gray.

Throughout, it’s the voice of Lee that has kept the band in tune with its fans, especially on the hit songs “My Immortal” and “Call Me When You’re Sober.”

“It’s so much fun when we find an opening act we love,” Lee says, referring to Rival Sons, with whom they toured last year. “It really puts us in the mood, when we can hear another band, with a different style, ranging from rock to classical to metal. They’re sort of like Led Zeppelin, and the other opening act, Electric Touch, is more like The Strokes.”

Rival Sons was formed in Los Angeles in 2008, with singer-songwriter Jay Buchanan leading the group (Scott Holiday, guitar; Robin Everhart, bass; and Mike Miley, drums) in recording a digital self-release a year later. The band has opened for Alice Cooper and done shows with Kid Rock, Judas Priest and AC/DC. Earache Records released the band’s major-label debut, Pressure & Time (which featured artwork by Storm Thorgerson, famed for his design of Pink Floyd’s Dark Side of the Moon).

Electric Touch, based in Austin, Texas, is led by British singer/ guitarist/pianist Shane Lawlor. Other members are Louis Messina Jr. on drums; Christopher Leigh on lead guitar and vocals; Portland Musser on bass; and Isaac Strycker on keyboards and vocals. The group has opened for Bon Jovi, Our Lady Peace and The Bravery.

Electric Touch released its self-titled debut album in August 2008, and has performed at South by Southwest, Bonnaroo, Lollapalooza, Coachella and the Austin City Limits Festival. Comparisons have been made with The Killers and Kings of Leon.

Evanescence will do a special in-store signing from 12:30 to 1:30 p.m. Saturday of the band’s new CD at Hastings, 915 W. Main St., Jacksonville. Those who buy the album will receive a “VIP/first chance to meet the band wristband” and will be entered into a drawing for a chance to win tickets to the concert Saturday night.