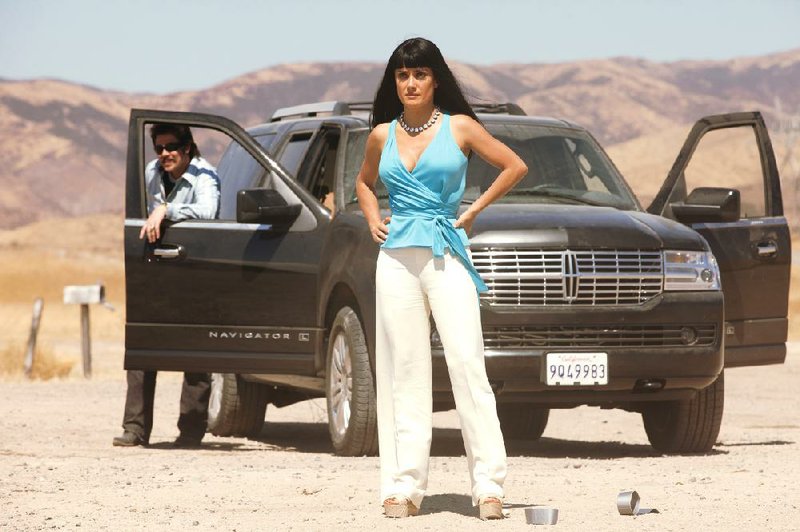 LITTLE ROCK — Multiple Oscar-winner Oliver Stone has written and directed movies about combat all his career. With Savages, the mind behind Platoon and Born on the Fourth of July has apparently declared unconditional war on subtlety.

Almost every frame is full of garish color, and the soundtrack is busy. If music isn’t blaring, star Blake Lively’s voice over is loudly reminding us of whichever point Stone is trying to hammer or stab home.

She plays O (short for Ophelia), a young woman from a prosperous but dysfunctional family who shares a bizarre relationship with two men. Chon (Taylor Kitsch) is a curt mouthed, scarred fellow who has survived multiple tours of duty in Iraq and Afghanistan. Through copulating, she hopes to drain all the pain from his soul (if there is any left) or help him find it.

He’s the love of her life, and so is Ben (Aaron Johnson, Kick-Ass). Having double majored in botany and business, Ben has taken cannabis seeds that Chon has smuggled from Afghanistan and engineered them to produce a strain that’s 10 times stronger than average weed.Knowing how to make and keep money, he uses the proceeds to fund charity work. Chon, with the help of some former Navy SEALs, runs security, ruthlessly. In O’s words, Ben is a Buddhist; Chon is a “bad-ist.”

Because of the push for pot legalization, the two are wise enough to know their lucrative boutique business plan can’t work indefinitely. When Elena (Salma Hayek), the Wal-Mart of marijuana retail, offers to make them partners, Chon and Ben counteroffer her their business because they want to take the money and run.

Competing with El Azul (or the Wal-Mart of Mexican marijuana cartels), she wants Ben and Chon’s expertise even more than their highly potent product. To let Ben and Chon know that her offers are final and binding, she has her cruel henchman Lado (Benicio Del Toro) abduct O. From his wartime experience, Chon knows that he and the gentler Ben have to be just as ruthless if the three of them are to survive.

Because there are life and death stakes, Stone imbues the entire film with a sense of vein-popping hysteria. For a good portion of Savages, this is an effective approach. Stone’s penchant for violence is amplified, informing viewers that the worst can and most likely will happen. People in this world (conceived from Don Winslow’s novel)don’t idly point guns or draw knives. Even a traffic stop can be fatal.

At the same time, Stone’s stylized direction can get distracting. When Elena shows her human side (she misses her college-age daughter who wants nothing to do with the family’s dirty business), it’s not nearly as convincing as when she’s browbeating Lado. She can do with a cross stare what he can with a gun.

Johnson and Lively are solid, but Kitsch could still use a little more personality even if he’s playing a burned out, angry warrior. In many cases, the supporting characters are more interesting. Del Toro can play thugs like Lado on autopilot but thankfully doesn’t, and John Travolta’s recent tabloid stories actually make him more believable as a quadruple-dealing DEA agent.

Because Savages already involves violence, love and drugs, it might have been more engaging if Stone had laid off the histrionics. When a character dies, he’s still dead, regardless of whether you see the gore or the splatter.