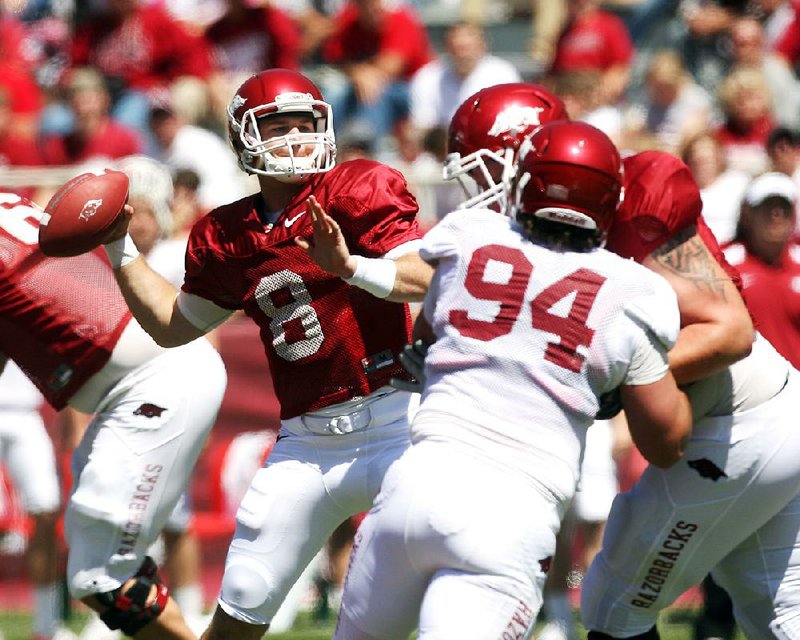 Tyler Wilson became the first Arkansas quarterback to earn firstteam All-SEC honors and could be a high draft pick next year in the NFL Draft.

FAYETTEVILLE — Tyler Wilson always believed in his ability, even before he started a game at Arkansas.

A year ago, others may have doubted the fourth-year junior who primarily sat on the bench for three seasons for the Razorbacks.

Not Wilson, the kid from Greenwood, Ark., who grew up cheering for his home-state school and wanted nothing more than to seize his opportunity.

The first-team All-SEC quarterback is back, armed with newfound confidence heading into his second season as Arkansas' starter. It's his first year as a top pro prospect — and his first as the unquestioned leader of a team eager to show once and for all that it belongs in the national championship discussion.

"I think there's kind of that chip (on our shoulder) that there wasn't before," Wilson said. "There's a little bit of that there, and we want to prove some people wrong."

Understanding where the chip Wilson talks about comes from isn't all that hard to figure out. Few, if any, other teams across the country can relate to what Arkansas has been through over the past four months.

The sequence of events that led to the firing of coach Bobby Petrino for hiring his mistress and John L. Smith's eventual hiring this spring are well known. What isn't as publicized is how the players rallied around each other following Petrino's exit.

Leading the way during and after the turmoil was Wilson, who bypassed the NFL draft a few months earlier and wasn't about to have his senior season derailed by Petrino. Wilson's impact was never clearer than prior to the Razorbacks spring game when he led and spoke during the team's final pregame huddle — a position of authority usually reserved for the head coach.

"The way we kept it together was incredible," Wilson said. "I think there are a lot of people in that room that weren't ready to quit, and I think they want to prove a lot of people wrong. I think that willingness, that determination obviously brings you closer. I think we're closer now than we've ever been, in my view. That's a great reason we can be a lot more successful."

Wilson cemented his teammates' respect last season while throwing for 3,638 yards and 24 touchdowns, leading Arkansas to an 11-2 record and a Cotton Bowl win over Kansas State. His final two years on the bench were spent as the backup to former Arkansas and current New England Patriots quarterback Ryan Mallett.

The role wasn't easy for Wilson, who was offered scholarships by Alabama and LSU, among others, and now admits "that was probably one of the toughest times of my life."

"It was tough, there's no doubt about it that you question yourself, you question kind of who you are a lot of times, what your role is," Wilson said. "You have to accept it, swallow your pride and be the second guy and do what's best for the team. In a lot of ways, that helps you down the road and helps me now not take things for granted."

Wilson was a relative unknown last summer while battling Brandon Mitchell for the starting job. His only significant exposure had come during a four-touchdown performance in 2010 against eventual national champion Auburn while replacing an injured Mallett.

Still, Wilson was invited to serve as a camp counselor at last year's Manning Passing Academy in Louisiana. It was an invite that helped Wilson assess his talent against some of the other top college quarterbacks in the country.

Wilson served as a counselor at the camp again last week, this time as an established veteran. He also used the opportunity to assess himself against some of the other top quarterbacks in the country, including USC's Matt Barkley, and came away full of confidence.

"There's nothing like being a senior," Denver Broncos quarterback Peyton Manning said about Wilson. "It gives you a little kind of added swagger, I think, and I think he'll have a really good year. I certainly see the talent in him. I certainly see him being a big NFL prospect as well."

The 6-foot-3, 225-pound Wilson considered leaving Arkansas after last season for the NFL,. He won't say where he was projected to be drafted had he left the Razorbacks after his junior season. The closest he'll come is to say he received a "pretty good projection, and I had a feeling deep down inside I could have went high."

What Wilson will say is that he never regretted his decision to return to school, even following the Petrino saga. He was confident in his decision when he made it, just as he's confident in Arkansas' chances at competing for SEC and national championships this season.

Wilson has come a long way in the last year, and his teammates have taken notice.

"I feel like when (Wilson) was behind Mallett, the difference between those guys at one point was Mallett knew the game just a little bit better," Arkansas running back Knile Davis said. "I see that now in Tyler. Tyler understands the game now, he understands the playbook and that's making him even better than he is. Plus, Tyler's a winner. His work ethic is very good and he wants to win and knows how to win."