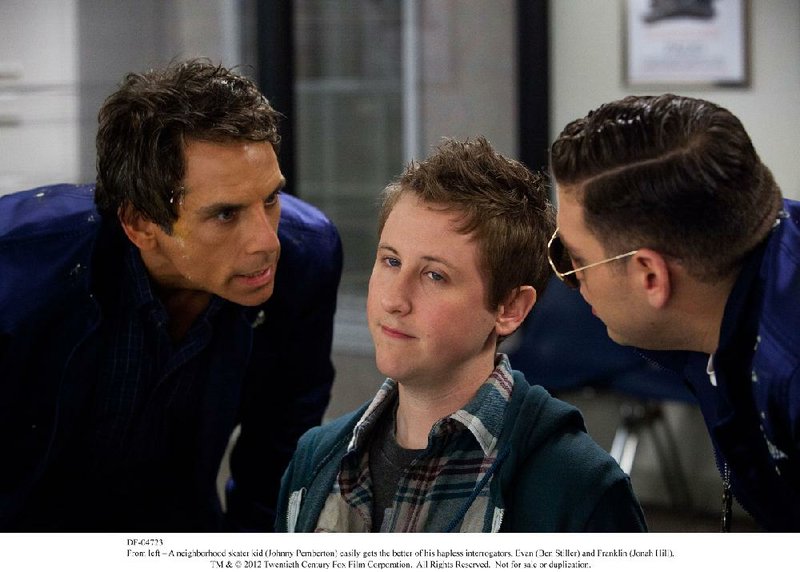 Director Akiva Schaffer has made dozens of genuinely amusing shorts as part of the comedy-musical team Lonely Island. Whenever one aired on Saturday Night Live, it was a safe bet that it would probably be funnier than the sketches that came before or after it.

Sadly, like a lot of SNL alumni or proteges, Schaffer has trouble coming up with 100 minutes of funny material.

With The Watch, he at least comes up with 45 to 60 minutes. That’s a little skimpy considering the level of talent he’s working with this time.

Ben Stiller stars as Evan, a Costco manager who takes his job and just about everything else too seriously. When his security guard dies after a savage attack, he rallies his small Ohio town into forming a neighborhood watch. Despite Evan’s earnest pleas, only three guys show up.

Bob (Vince Vaughn) is a construction company owner who’s driven to paranoia by his teenage daughter (Erin Moriarty). Franklin (Jonah Hill) could have been a cop had he been able to pass the written test, the physical test and the mental-health test. Jamarcus (Richard Ayoade) has curly hair, speaks with a British accent and has a strange carnal obsession.

None of these four would scare a common criminal, and their town is so small that gang activity consists of teens tossing eggs at the four of them. Nonetheless, they gradually discover that their dull but fair city is under siege by thugs from another world.

The funniest scenes in the film happen before the aliens come out of the woodwork. Considering all the effort that went into the alien costumes and special effects, that’s a problem. The malevolent ETs should be the highlight of the movie, not a flashy distraction.

The aliens are pretty derivative, and the logic behind them is pretty shaky. The strategy for killing them seems like an afterthought. If you thought H.G. Wells’ way of offing the Martians in The War of the Worlds seemed lame, these fellows were even lazier (some of them did give us Lazy Sunday).

The casting also never quite gels. Stiller comes off as a coiled spring, and he and Vaughn seem to be competing to see who can put on the best tantrum. Hill and Ayoade have their moments, but the four never really develop a sense of comedic teamwork.

The supporting cast is solid, but Will Forte (as a fussy, condescending cop) and Rosemarie DeWitt (as Evan’s frustrated wife) should have been given more to do.

The Watch has the misfortune of coming out in the wake of the Trayvon Martin shooting, so the filmmakers had to drop the original title, Neighborhood Watch. The film also comes out a year after the far more entertaining British movie Attack the Block, where South London gangbangers prove to be the only individuals tough enough to stop space invaders.

To see what Schaffer has to offer, go back and Google some of his earlier videos. He’s more at home on the Lonely Island than he is in space.