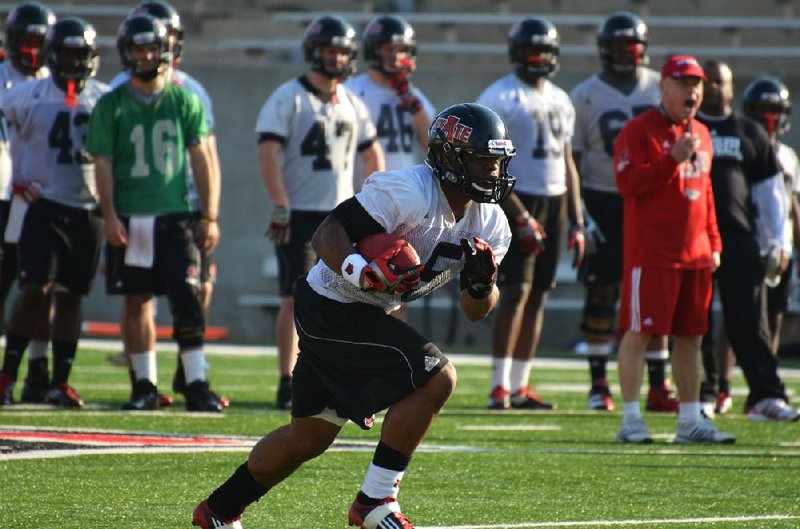 Arkansas State running back Michael Dyer (above center) was dismissed from the Red Wolves’ football team by Coach Gus Malzahn on July for a violation of team rules. Dyer transferred to ASU in January after leaving Auburn. Dyer tweeted out Monday that he was transferring to Prairie View A&M.

LITTLE ROCK — Police say an internal investigation has been conducted regarding a traffic stop from earlier this year involving an Arkansas State University football player who was recently dismissed from the team for an unspecified rules violation.

Dyer and the other driver, identified as Ronnie Wright, were issued citations in White County for driving 96 mph in a 70 mph zone.

But according to audio recorded of the traffic stop, Denney also found suspected marijuana and a gun in one of the cars. Denney can be heard in the recording admonishing Dyer for having the weapon but telling him he will let "coach" make the decision on what to do with it.

A short time earlier in the recording, Denney asks Dyer about "the weed" and mentioning the possibility of telling ASU coach Gus Malzahn about the incident.

"I really don't want to tell him about this because of NCAA stuff," Denney says. "I know a lot of stuff goes on behind closed doors with coaches and players, but I'm still in a predicament."

Later in the recording, Denney tells Dyer it "pisses me off" that someone "of your stature, of your ability" would do something so stupid.

State Police spokesman Bill Sadler said in a statement that Col. JR Howard, director of the agency, has received a final report on the incident, but has not yet taken any action on it.

"Presently there is a personnel matter associated with the investigation of Trooper Denney pending before Colonel Howard and at this time the department is prohibited from acknowledging any further information about the internal investigation," the statement said.

Dyer's dismissal from the team was announced Sunday night, though school officials did not release details beyond saying it was spurred by a team rules violation. The 2010 Little Rock Christian graduate had transferred to Arkansas State from Auburn University, rejoining Malzahn.

Malzahn served as the Tigers offensive coordinator and helped recruit Dyer there before joining ASU.

Dyer never played a down for ASU and was going to sit out the 2012 season per NCAA transfer rules.