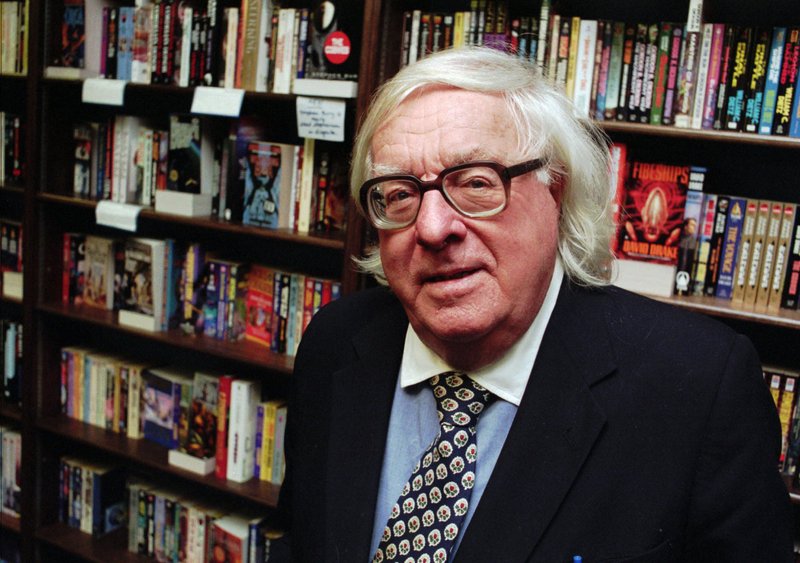 FILE - This Jan. 29, 1997 file photo shows author Ray Bradbury at a signing for his book "Quicker Than The Eye" in Cupertino, Calif. Bradbury, who wrote everything from science-fiction and mystery to humor, died Tuesday, June 5, 2012 in Southern California. He was 91.

LOS ANGELES — Ray Bradbury, the science fiction-fantasy master who transformed his childhood dreams and Cold War fears into telepathic Martians, lovesick sea monsters, and, in uncanny detail, the high-tech, book-burning future of "Fahrenheit 451," has died. He was 91.

He died Tuesday night, his daughter said Wednesday. Alexandra Bradbury did not have additional details.

Although slowed in recent years by a stroke that meant he had to use a wheelchair, Bradbury remained active into his 90s, turning out new novels, plays, screenplays and a volume of poetry. He wrote every day in the basement office of his Cheviot Hills home and appeared from time to time at bookstores, public library fundraisers and other literary events around Los Angeles.

His writings ranged from horror and mystery to humor and sympathetic stories about the Irish, blacks and Mexican-Americans. Bradbury also scripted John Huston's 1956 film version of "Moby Dick" and wrote for "The Twilight Zone" and other television programs, including "The Ray Bradbury Theater," for which he adapted dozens of his works.

Bradbury broke through in 1950 with "The Martian Chronicles," a series of intertwined stories that satirized capitalism, racism and superpower tensions as it portrayed Earth colonizers destroying an idyllic Martian civilization.

Like Arthur C. Clarke's "Childhood's End" and the Robert Wise film "The Day the Earth Stood Still," Bradbury's book was a Cold War morality tale in which imagined lives on other planets serve as commentary on human behavior on Earth. "The Martian Chronicles" has been published in more than 30 languages, was made into a TV miniseries and inspired a computer game.

"The Martian Chronicles" prophesized the banning of books, especially works of fantasy, a theme Bradbury would take on fully in the 1953 release, "Fahrenheit 451." Inspired by the Cold War, the rise of television and the author's passion for libraries, it was an apocalyptic narrative of nuclear war abroad and empty pleasure at home, with firefighters assigned to burn books instead of putting blazes out (451 degrees Fahrenheit, Bradbury had been told, was the temperature at which texts went up in flames).

It was Bradbury's only true science-fiction work, according to the author, who said all his other works should have been classified as fantasy. "It was a book based on real facts and also on my hatred for people who burn books," he told The Associated Press in 2002.