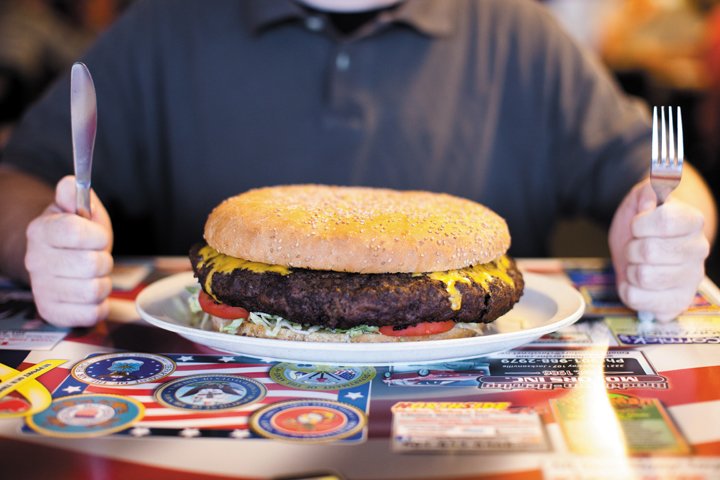 The gargantuan Sarge Burger of Pig’n-Chik Barbecue in Sherwood is four pounds of meat and a full pound of bun, dressed to your preference. If someone can consume the whole thing in less than 30 minutes, the $25 burger is on the house.

There are burgers and then there are burgers. The first is the grilled bit of beef we slap on a bun and call a meal. The latter are the titans of the breed, monstrosities of immense proportions that turn those who conquer them into legends. Well, more or less.

The food challenge is perhaps not new but is fairly recent as a thing. I mean, it was more than 20 years ago that the late, great John Candy gave us the classic scene of trying to consume the “Old 96’er” — gristle, fat and all — in The Great Outdoors. But The Travel Channel’s Man vs. Food, hosted by Adam Richman, only launched back in 2008.

While that show may be done, food challenges most definitely are not, particularly when it comes to Burgers. Indeed, the Little Rock metro is not devoid of places where the average diner can set himself against a Burger to see if his stomach, roughly the size of a closed fist, can confidently say “challenge accepted.”

Good luck, said Kerry Gore of Pig’n-Chik Barbecue in Sherwood, home of the gargantuan Sarge Burger. It’s four pounds of meat and a full pound of bun, dressed to your preference. If someone can consume the whole thing in less than 30 minutes, the $25 burger is on the house.

“It’s about like trying to eat a big phone book,” said Gore as he hefted one out for show, no small feat since the thing is heavy and takes an hour to prepare. The patty itself takes 15 minutes to put together. The diameter is larger than a table knife laid across the top of the bun.

The Sarge Burger, around for nearly a decade, grew out of an even older challenge. The house served up a half-pound Bubba Burger, and Gore had the idea to make it a double served with a pound of fries. Finishing it got you a free dessert and a picture on the wall. That wasn’t hard enough, though.

“One day I was sitting here, and I said we need one that you just can’t eat,” Gore recalled of the Sarge’s origins. A little bit of research on what the human stomach can and can’t take, and the Burger was born.

But every Goliath has its David. Originally, the creation was called Bubba’s Mother and the challenge was that the first person to finish it in time would have their name given to it. Many tried, but it was Russellville’s Andy Sargenti, nicknamed Sarge, who succeeded. He cut it close at 27 minutes.

Since then two others have duplicated Sarge’s feat, a local high school student and an actress. The latter actually went one better despite being a slip of a girl, all of 105 pounds to hear Gore tell it.

“When she walked in here, I thought, ‘Yeah right. She’s going to finish this?’” he recalled.

She did. In 17 minutes. And, just to put the proverbial cherry on top, she ordered and finished a piece of pie to go along with it. She’d trained, she later told Gore, by drinking lots of water leading up to the task.

But Gore said even with preparation it’s no easy feat to finish (he’s never actually tried, he added). The meat is thick, and it’s done all the way through. So it’s hot — and the timer is ticking. “The key, I think, is to order it early and let it sit for an hour,” he said.

And understand it’s not like eating a 72-ounce steak. Steaks don’t have a bun. Buns soak up anything you drink — then expand. Just ask the guy who tried the challenge and got it all the way down to one bite left with six minutes to finish it. He couldn’t, despite his wife urging him on (and eventually grabbing him by the collar and shaking him as ... encouragement).

“It’s always exciting when someone tries it,” Gore said. Ditto for those who attempt to take on the task of the hand-drawn sign at Midtown Billiards in Little Rock. Well known for its beloved burgers (particularly on late nights ... or early mornings), the establishment also offers a proposition: finish its monolithic $25 burger creation in 30 minutes and not only get the meal for free, but get your name etched onto a plaque of finishers and a T-shirt. That plaque has fewer than a dozen names, though. And hundreds have reportedly tried.

Whereas the Sarge Burger boasts girth, Midtown’s monstrous Burger goes vertical. The stack includes four patties, two fried eggs, bacon, fixings ... and a full can of SPAM. It’s served in a box top. You can have all the water you want, but once the clock starts you gotta stay put.

Things aren’t so strict at west Little Rock’s Cheeburger Cheeburger. There the deal is simple: finish the full “Famous Pounder” (actually 20 ounces before cooking) and get your picture on the Wall of Fame and/or a copy to take home. Kids under 12 get the same deal for finishing the half-pounder.

“I think they like it just as much as, maybe more than, the adults do,” said franchise owner Mark Shuffield.

At “only” a pound, it could be called easier than others, so much so that there are usually one or two successful completions a day during the week and more on the weekends, Shuffield said. But it’s probably easier to live with afterward, too.

And then there are those who just have to up the ante. Shuffield said he’s twice had folks come in and double up, ordering two pounders at once. Another person ordered two, ate both, then ordered a third. Shuffield said he’d pay the tab if the guy finished the last (not necessarily a standing deal), but the poor guy just couldn’t do it. And then there’s the guy who ordered the pounder with everything, which at Cheeburger means a whopping eight cheeses and around 30 toppings.

His reasoning? “Just to say he’d done it,” Shuffield said. Sounds about right for Burgers.