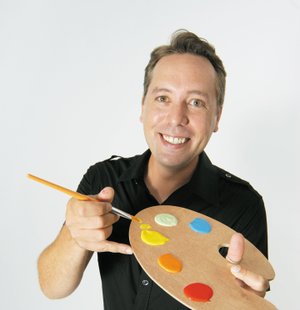 Graphic artist and muralist Steven Otis drew inspiration from several unconventional sources, including a Mr. Potato Head from outer space, when conceptualizing his new mural in SoMa. It was this visionary thought process that resulted in such a far-out piece of public art. What he dubbed the “Yes We Can Can” mural reflects the community’s homegrown way of thinking.

Q: Where did the inspiration come from for the SoMa mural?
A: [Property owner] Anita Davis. It was her concept. She had seen a 1950s Mr. Potato Head in outer space toy set, and she called me, and she just said she wanted something similar but basically veggies in outer space. I was also inspired by vintage salt and pepper shakers and refrigerator magnets, and there’s a little bit of Pac Man and Hello Kitty and some other vintage space games and board games. There’s a little bit of some of my friends in the characters. It was just really meant to be silly and fun and colorful. Different people have different takes on it. Some people say it’s the future of eating vegetables, but it really was mainly to be silly and bring smiles to people’s faces.

Q: How do you even begin to get started on such a monumental piece of art? How is painting a mural different from working on a canvas?
A: I had to take into consideration the area, but what I did was look at the dimensions and just basically went from that and just started creating different characters. And I don’t think Anita Davis was expecting me to create 28 characters, but I ended up with all these funny, silly vegetables and fruits. I don’t think she was expecting me to paint the entire wall, but I was like, let’s just go for it and cover the whole thing. It was a little ambitious, but I’m happy with the result.

Q: It’s one thing to buy canvas and work in your studio, but it’s not like there’s just a ton of big outdoor walls that people want painted. How do you get your name out there as someone who does that and/or get connected with someone who is looking to have it done?
A: I’m mainly a graphic designer. I design logos, brochures, catalogs and that sort of thing. I really don’t paint murals full time. I have in the past, but it was a long time ago. So, I was really just so grateful and so honored that she asked me to do that, because she knows a number of artists. Also, I had a lot of help from Shannon Wallace. She is a more experienced muralist, and I honestly could not have done the mural without her. It was a huge undertaking for two people. Probably in retrospect, I might have had a team. It took two months ... actually three months because the first month I spent preparing and drawing and just getting everything ready and organizing and getting paints and supplies. It took two full months to actually paint, and originally I had said it was going to be a month.

Q: What sort of reaction has the public had to the mural thus far, now that it’s finished and while it was in progress?
A: In the beginning we got some strange reactions because it was a process, and they didn’t understand what it was because we started with the planet and worked our way up. It looked a little odd in the beginning, so we got some funny comments. But people really enjoyed watching the process. We had the same people come back every day. But the reactions were just incredible, especially from children. People would get out of their cars, and they would laugh or smile. People told me it made their day coming around the corner. We actually dedicated the mural to a little boy in the neighborhood named Gus. He was 3 or 4, and he was our biggest fan. He would make his mother bring him down there, and he had the funniest quotes. His face was pure joy. The cutest thing was one night when his mom was putting him to bed, he asked her if the cornbread man closes his eyes at night. She said that he makes her drive past it, and he was just really inspired by it. It just warmed my heart. I want to make the eyes close at night now.

Q: While you were painting it, what song did you imagine the cornbread was singing?
A: I was listening to an old Oxford American CD, and I came across the song “Yes We Can Can” by Lee Dorsey. It has trumpets, and backup singers, and literally I see the characters dancing to that song. And I said, “I want to call the mural ‘Yes We Can Can’, and somebody said I can’t because that’s Obama’s slogan. I didn’t even think of Obama. I love that song and the message, because if you listen to the song and think of South Main Street and where it has come and how it’s growing and everybody coming together, “Yes We Can Can” is the song I hear. I picture the cornbread singing it, and the black-eyed peas are the backup singers. I call them Cosmo and the Beeps.

Q: What’s your favorite vegetable?
A: Tomato. I can eat a tomato like an apple. My favorite thing is a bagel with cream cheese and a slice of tomato.

Q: Recently a well-known mural at 315 main — the flower mural — was painted over. How does it make you feel to see a mural that has become a part of the community over time vanish?
A: I’m horrified. I cannot believe they painted over that. I mean I know that it had aged, and probably some people saw it as unattractive, but I just thought it was wonderful and I’m sad that it’s gone. ... It just seemed like it was historical.

Q: What do you like best about the South Main neighborhood? What’s your personal vision for it?
A: I really like the idea of using local, like The Root Café, The Green Corner Store. At Christmastime or birthdays I try to buy all my gifts there because I want to support the local community. The Bernice Garden, where it has come from day one is just unbelievable. Liz Sanders and Anita have put so much time and energy into making that such a wonderful place for the community to gather. I think there’s a lot coming. I think it’s going to grow. I just love going down there and seeing how it has transformed and seeing people on bicycles with their little baskets of veggies.

Q: Do you think that murals are a fading art form? Why or why not?
A: Well, I’ve always wondered why there’s not more art in Little Rock or in Arkansas in general-like sculptures and murals and that sort of thing. I don’t think it’s a dying art form because in other cities there are tons and tons of murals. I just don’t know why there aren’t more here. I want to just coat the whole street in murals. The one thing I learned about this mural ... because I’ve never done anything this scale and especially nothing as public. We were on public display, and the original intention was silly fun, a gift for the community to add some color because the building was just an eye sore, but what I learned in the process was that it’s more than a mural. Everybody from all different walks of life came up and spoke to us. It was kind of like a community gathering, and the smiles and laughter was just incredible. And the positive responses — it was a daily thing. We never knew what someone was going to say, and some of them were just really wonderful. It just made me feel good.