Wes Anderson touches our hearts again with Moonrise Kingdom by PIERS MARCHANT SPECIAL TO THE DEMOCRAT-GAZETTE | June 29, 2012 at 3:14 a.m. 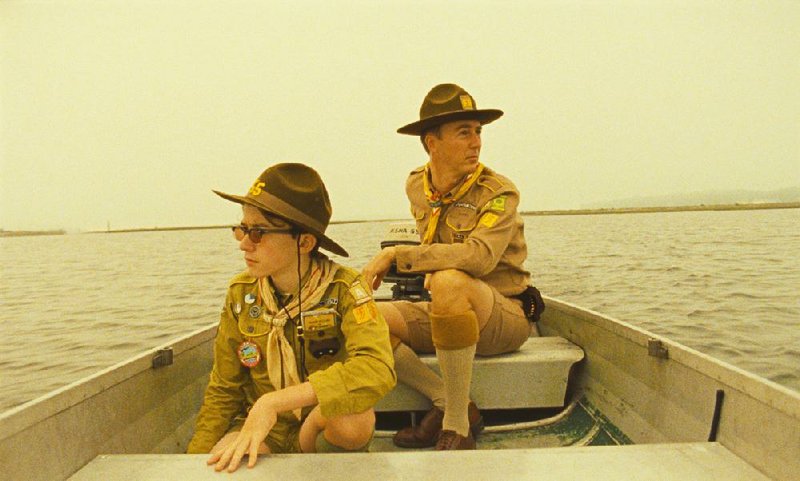 LITTLE ROCK — It has gotten to the point where you can picture writer/director Wes Anderson and one of his frequent collaborators - let’s say Roman Coppola - sitting around their ironically ornamented studio office tossing ideas back and forth like a pint-size Nerf football, trying to conjure up the next project that fits into Anderson’s famously particular aesthetic.

“It’s gotta be set in the ’60s,” one of them says. “There should be a bunch of kids who act like damaged adults,” says the other. Then, in unison, they both say, “It’s gotta have Bill Murray!”

The question becomes one of aesthetic linguistics: Does the project that gets conjured up fit into their mold, or is the mold so set and solid that every idea gets transformed into Anderson’s artistic vision? The query isn’t without merit, but in Anderson’s newest film (co-written by Coppola), involving a pair of pre-adolescent lovers on the lam on a small, rocky island during one of the worst hurricanes of the latter half of the century, they have again found a subject that so perfectly conforms to his aesthetic, the deliberation is rendered practically moot.

The island is called New Penzance, somewhere off the coast of New England.

Small and stubby, we are told by an artfully sincere meteorologist (Bob Balaban), the island is renowned for a brutal hurricane back in 1965 that flooded many of the towns and caused an enormous amount of damage. As it happens, in the film’s time frame, the storm is but a few days hence, which properly sets the dramatic stakes for the young lovers in question.

Sam (Jared Gilman) is an orphan, said to be emotionally unstable, and strongly disliked by his fellow Khaki Scouts, stationed in the wilderness in a series of orderly pup tents. By chance, Sam encounters Suzy (Kara Hayward) at a local community theater production (another Anderson staple), and the two instantly fall for each other.

Over the course of the next year, they correspond via letter and hatch a plan to run away together and go on an adventure hiking into the wilderness. When Sam suddenly vanishes, his troop leader, Scoutmaster Ward (Edward Norton), panics and fans his remaining troops out to try and track him down, even as the local police Captain Sharp (Bruce Willis) and Suzy’s parents (Bill Murray and Frances McDormand) join in the search.

Anderson is certainly deep in his element here, from Captain Sharp’s short pants and white socks to the stock of made-up young-adult novels that Suzy takes with her for the journey (e.g., The Disappearance of the 6th Grade), his particular brand of ideology is in full effect. There are those, I suppose, who have grown tired of his aesthetic, who increasingly see in it more shtick than substance, or, like Woody Allen’s nervous tics, have seen it enough not to want to bother with it again. But I respectfully believe they are sort of missing the point.

Much like actors, filmmakers have immutable styles. Some attempt to create new canards and dabble in other genres, while others find something that works, that feels right to them, and are perfectly content to wallow and splash there for the rest of their careers. I’m not at all certain that should be viewed as any kind of failure, artistically or otherwise, and certainly not here, in a film as benign and laced with sweetness as this one.

If Anderson at times teeters on the edge of preciousness - when the two lovers attempt to make their final getaway, they’re wearing utterly adorable bird masks - he never entirely loses his ironic cool. He might be using a number of the same tricks over and over again (though at least this particular soundtrack is far more imbued with Hank Williams than the Kinks), but to my mind at least, they aren’t as much diminished from the repetition as they are enhanced by our previous acquaintance. Contrary to the popular aphorism, it doesn’t always have to breed contempt: Sometimes familiarity can foster a kind of welcome kinship.