'The Lorax' is Seuss with additives 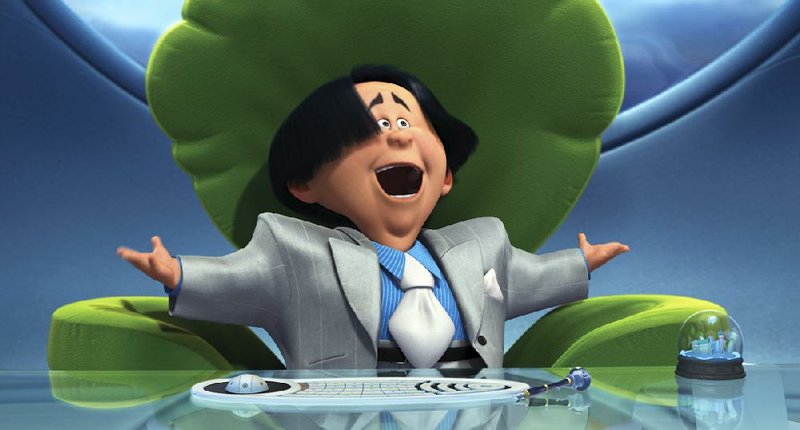 O’Hare (voice of Rob Riggle) is a big villain, despite being only as high as your thigh, in Dr. Seuss’ The Lorax.

LITTLE ROCK — Possibly the greatest charm of Theodor Seuss Geisel’s writing is that he expertly managed to educate his audience without making children or the adults who accompanied them feel as if they’d been lectured or preached to.

In fact, Dr. Seuss’ The Cat in the Hat was specifically designed to get youngsters into reading because the primers that came before it were dull enough to make illiteracy seem like a smart idea. There’s a reason we remember that particular cat, the Grinch and the Lorax and why Dick and Jane simply inspire ridicule.

Speaking of the Lorax, the makers of the new 3-D animated Dr. Seuss’ The Lorax do their best to honor his intent to make youngsters appreciate what can happen if pollution runs amok. If director Chris Renaud (Despicable Me) does have a challenge to overcome, it’s figuring out how to make a 1971 story that can take about 15to 20 minutes to read work as a 94-minute movie. It was fairly easy to get his story to work in a 1972 half-hour TV cartoon, but now that the good doctor is no longer around to write his own scripts, screenwriters Ken Daurio and Cinco Paul can be forgiven if they aren’t as consistent in replicating the magic.

They actually cram Seuss’ original tale into another that’s not quite as enchanting. Ted (voiced by Zac Efron) is a teenager living in a city called Thneedville, which is made almost exclusively of plastic. He and most of the rest of the residents give little thought to the fact that all of their vegetation is synthetic and that all of the air comes in cans. O’Hare (Rob Riggle), the town’s de facto mayor, is happy to capitalize on the fact that everything the people breathe comes from his company.

That changes when Audrey (Taylor Swift), the girl who has infatuated Ted for years, tells him she’d love to see a real tree. Because all of the vegetation in Thneedville has been simulated for so long, Ted has to consult his Grandma (who else but Betty White?) who sends him to a hermit living outside of town called The Once-ler (Ed Helms).

It turns out the recluse has avoided everyone but Ted because he’s the one who turned the world outside of Thneedville into an ugly, brown wasteland. If O’Hare seems like an obvious or heavy-handed villain, Helms’ Once-ler is an intriguing variation on the Seuss original. In the book, he’s an almost-monstrous being whereas in 2012, he’s a likable, well intended fellow who learns far too late about the damage he has helped cause.

Taking some of the leaves from a truffula tree, he can design a new garment called a Thneed that’s as universally useful as a ShamWow or a Schticky. Unfortunately, he makes the mistake of cutting down whole trees to get the fluffy leaves. This upsets the Lorax (Danny DeVito), a short, orange critter with a yellow mustache who tries to warn Once-ler about the consequences.

Understandably, the animals that live in the woods behave a lot like the minions in Despicable Me, which is good because they do a better job of filling the time than the uneven musical numbers do. That’s a shame because Helms, Efron and Swift can carry tunes nicely. As with Renaud’s previous movie, the 3-D is used subtly and without the urge to toss images into the viewers’ faces. There’s also a dead-on parody of beer commercials (that actually hypes O’Hare’s air) that demonstrates how easy it is to get suckered into buying products we neither need nor want.

If Dr. Seuss’ The Lorax can’t quite master Geisel’s finesse, at least it was made with suitable reverence for the source material. Note that Ted and Audrey are named after the cartoonist and his second wife. Considering that this film comes from the same animation studio that brought us Hop last year, it’s nice to know that they now understand that good stories are more entertaining than bunnies with jelly bean droppings.