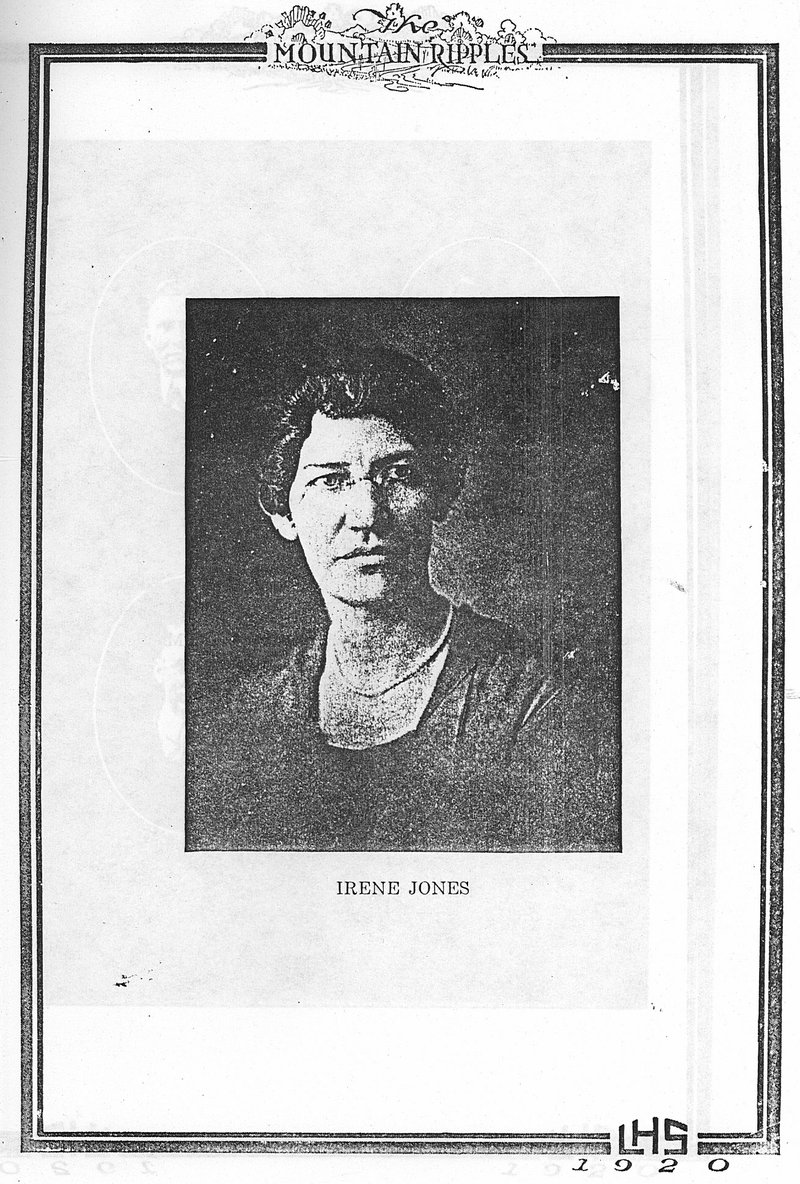 In 1921, Irene Jones served double duty as superintendent of Leslie High School and as the chaperone of its basketball team.

In the modern era, the scene is nearly unimaginable.

A ragtag group of farmer boys from the Ozarks level out a patch of dirt in the side of a hill, and there teach themselves basketball under constant supervision of a female superintendent nicknamed “Black Hawk.” Although they have never seen an indoor court before, they get invited to the state tournament in Little Rock. There, the defending champs’ coach buys them new shoes and teaches them how to play indoors. Then, lo and behold, the script ends in true Hollywood fashion, with the underdog Mountain Ripples of Leslie High School squaring off against powerhouse Little Rock High for the championship on the Tigers’ very court.

These days, the north Arkansas schools playing for top-classification state championships against Little Rock teams typically have larger enrollments then their opponents. Fayetteville High, for instance, has 887 more students than Little Rock Hall High, its foe in Friday’s 7A state title game.

This was far from the case in spring 1921, when Leslie High School had 56 students and its seven Mountain Ripples stormed through a four-game regular season to finish 2-0-1-F. Rain had left one game a tie. Another game was cut short when a fight broke out with Leslie ahead, leaving the “F” in the record. Leslie regularly scored 50-60 points per game, which was high for the era. “If we had any style, it was get there firstest with the mostest,” team member Guy Mabrey told the Arkansas Gazette. Farming had given his teammates “the stamina to go a fast 20-minute half without any rest. The boys had roamed these hills so much after their coon dogs that running 20 minutes on the court was small stuff. Rarely was time ever called, not even for a mashed nose or a lost tooth.”

All that could waylay them for a date with postseason destiny, it seemed, was a Missouri and North Arkansas Railroad strike. The team considered driving a car on the winding, rocky 77 miles to Little Rock, but Leslie superintendent Irene Jones - the team’s coach in name only - wouldn’t allow the two-day trip. On the last possible day to make it to the state tournament, their ride finally showed up, Mabrey recalled. “The train was manned by strikebreakers, and it seemed that everyone had a gun.”

On the first morning of the two-day tournament, team chaperone Irene Jones visited a practice gym to ask the coach of Little Rock High School (now Little Rock Central) to give Leslie some pointers. Although Earl Quigley had never heard of the Mountain Ripples, he took one look at them and decided they needed help.

“We had Sears Roebuck uniforms,” team member Glyn Hollabaugh told the Arkansas Gazette in 1974. “They may have looked a little long and awkward to other teams. Our tennis shoes were scuffed and dirty because we’d never played on anything but dirt, outdoors.”

The rush order of footwear soon arrived from the Bush-Caldwell sporting goods store, and Quigley and an assistant began an impromptu noon practice with this strange team from the hills.

Irene Jones may not have known enough about basketball to help Leslie defeat other teams, but the iron-fisted chaperone certainly wasn’t going to allow the boys to beat themselves. Her dedication to discipline is the reason they’d asked “Black Hawk” to supervise them in the first place, according to Charles Cotton, who is more than 90 years old and knew Mabrey well. The first night in Little Rock, Ms. Jones locked them into their hotel room, Cotton told Searcy County Library genealogist Geraldine Littleton. And woe to any players who dared sneak out or disobey Jones in any other way. Cotton said: “She would shake the waddy out of you.”

Leslie had little trouble dispatching its first three tourney opponents - Helena, Crossett and Texarkana, Mabrey told Orville Henry, the longtime Arkansas Gazette sports editor. Crossett, however, apparently thought it funny that Hollabaugh, then a sophomore, was 19 years old. “I think some of the Crossett boys accused him of being married and of having grandchildren,” Mabrey said. He added the age of Leslie’s star center was a moot issue for former Gazette sports editor Henry Loesch, who said: “I do not know if Hollabaugh is a grandpa or not, but if he is, he is certainly a spry one....”

One glance at the rest of Leslie’s roster, as reported by Henry, reflects an era in which age limits seemed a foreign concept: Senior Guy Mabrey was 20 years old; seniors and juniors Lozenzo Clemons, Bruce Griffin, Guy Cable and William Clark were 18 years old and freshman Delmer Ruff was 17 years old.

On the state tourney’s second day, Earl Quigley ran a 7 a.m. practice with the Leslie players. By that afternoon, he was preparing to lead his Little Rock High Tigers against them.

The Little Rock gym was standing room only for the title game, with a sizable percentage of the crowd rooting against the Tigers, who had won three of the previous four state championships. The defending champs still had plenty of talented players, whom Mabrey recalled as Doug Wycoff, Loren Adkins, “Patterson,” “Biggadike,” and Rule.” The pregame hype boiled over into Leslie’s locker room, where some Little Rock boosters flashing a roll of dollars found Mabrey putting on his uniform. They asked if he wanted to bet against the line - five to one on Little Rock. “This looked rather tempting, but I was not a betting man, and besides, I just had $10, barely enough to get home on.”

Even had Mabrey taken the bet, he needn’t have worried. After helping lead Leslie to a 24-21 victory that day, he and his teammates returned home as heroes.

Since then, there have been other small, underdog schools from the Ozarks and its foothills to take the state’s top title (e.g. Western Grove in 1930, Coal Hill in 1936, Ash Flat in 1939). There was even another woman to head a boys basketball state champion. Barbara Wilburn coached Marked Tree to the 2001 title. But, nearly a century later, it seems safe to say no other team will ever make quite as unexpected a splash as the Mountain Ripples of 1921.