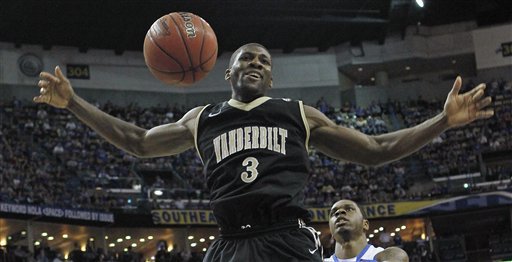 Vanderbilt center Festus Ezeli (3) reacts after scoring during the first half of an NCAA college basketball game against Kentucky in the championship game of the 2012 Southeastern Conference tournament at the New Orleans Arena in New Orleans, Sunday, March 11, 2012. (AP Photo/Gerald Herbert)

John Jenkins and Festus Ezeli both had 17 points for Vanderbilt (24-10), which was playing in its first SEC tournament final since 1951, the year of its only other championship. The Commodores pushed ahead in the final minutes with a few timely shots, but mostly with suffocating defense.

Darius Miller scored 16 points in a surprise start for Kentucky while Terrence Jones and Anthony Davis both added 12.

Kentucky coach John Calipari has repeatedly told anyone who will listen that he doesn't care about conference tournaments, viewing them as a nuisance before the NCAA tournament.

But Vanderbilt obviously didn't feel the same way, with a wild scene afterward that saw Jenkins laying on the court with his hands over his face while teammates celebrated around him.

Vanderbilt had already played Kentucky close twice this season, and the Commodores were up to the challenge once again. Taylor scored 13 first-half points and Jenkins hit three 3-pointers as the Commodores pushed out to a 26-18 but had to settle for a 37-37 tie at halftime.

As is their custom, Kentucky's fans completely took over the SEC tournament and turned New Orleans Arena into a home venue, roaring when Miller was announced as a surprise starter. But even with that emotional lift, Vanderbilt had more energy in the first half and the Wildcats were constantly battling from behind.

Miller's eight first-half points and a couple of timely 3-pointers by Kyle Wiltjer helped Kentucky keep things from getting out of hand.

There wasn't much separation in the second half until about halfway through, when Jones had two powerful dunks to put Kentucky up 54-49 and get the crowd into it.

It looked like Kentucky might pull away, but then the entire team's shooting touch suddenly went frigid. After a dunk by Miller with 8:04 left, the Wildcats missed 14 consecutive shots from the field to lose for the first time since Dec. 10.

It also spoiled the Wildcats' perfect season against SEC competition. Kentucky is 18-1 against SEC opponents.

Vanderbilt has won four of five games heading into the NCAA tournament.