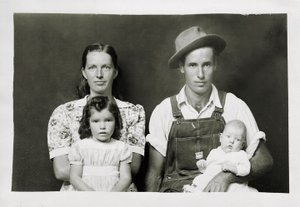 The Disfarmer exhibit will include this picture of an unidentified family of four.

In 2004, residents of Heber Springs were jostled when strangers with Northern accents knocked on every door in the town asking to have a look at family photographs. Shoeboxes full of crumbling black and white relics were dragged out of closets and revisited.

And what came as an even bigger surprise to the locals was that these strangers from up North offered hefty lumps of cash for certain prints, taking away the originals and leaving behind scanned copies for the families. These New Yorkers were part of a historic reclamation project that canvassed the town and surrounding areas in an effort to rediscover the works of an unrecognized artistic genius who documented small-town life for nearly four decades.

Little is known about Mike Disfarmer other than his reputation as an outsider. Disfarmer was born Mike Meyer in Indiana in 1884. In 1939, he had his surname changed to Disfarmer, claiming that “meyer” meant “farmer” in German and that he was not a farmer so “Disfarmer” was more appropriate.

His name change epitomized his standing in the community. Heber Springs was an agrarian town, and Disfarmer was already out of place due to his choice of profession. His career was not all that set him apart.

Disfarmer openly denounced the Bible and had no children.

He felt so detached from society and his own family after the death of his mother that he alleged he was not actually born to the Meyer family but blown into their midst by a tornado. He even once suggested he was the missing Lindbergh baby.

“The people in Heber Springs had no notion whatsoever that there was an artistic genius lurking behind this. He was more like a Boo Radley. They were all kind of scared of him,” said Jennifer Carman.

Carman is an art appraiser and curator for the exhibition, Disfarmer: Portraits from a Lifetime, to be showcased at Greg Thompson Fine Art starting tomorrow. When asked what sets Disfarmer’s portraits apart from similar portraiture of his era, Carman cites his peculiarities as something that filtered into his work and made it unusual.

“[The photos] could be of any rural town in America in that time period, but I think underpinning that is the fact that the qualities they have that really speak to us are qualities I think not just any photographer could have achieved ... I think it has to do with the fact that Disfarmer was such an outsider… that he could almost observe these people like a scientist observing a specimen because he was so not connected to them.”

Carman believes Disfarmer did not see himself as an artist. He did not seek out the subjects of his portraits in order to manifest an artistic vision. His subjects were regular townsfolk who saved their pennies and headed to the town photographer for a family photo.

“I think what’s so compelling about these is that it’s in their very ordinariness that makes them extraordinary. They are so unpretentious. The subjects lack any sense of a self-conscience or an awareness,” Carman said.

“Talking to people who have posed for him, what I’ve heard is that you didn’t know he was taking the picture. You’re standing there, you’re getting ready, you’re waiting for him to tell you what to do, and the next thing you know he’s done it.”

Though most of Disfarmer’s portraits are believed to have been collected in the reclamation project, there are many Arkansans who have hung onto their keepsakes and many who have begun Disfarmer collections of their own. There are also incalculable unmarked originals out there that are unknown to be Disfarmer’s.

The exhibit opening tomorrow showcases 40 vintage photographs that were not gathered during the reclamation project. They come from families with Heber Springs ties who held onto the treasures.

Original Disfarmer prints are selling for anywhere from $20,000 to $30,000 depending on their condition and appeal.

“Adolescents and adults tend to bring more money than infants. ... I think ultimately what it really comes down to is the images that are bound to speak to people sell for more money and sell faster. But putting your finger on what it is that speaks to someone is the million dollar question in the art world.”

Carman is most fond of one photo portraying four young hunters. She managed to track one’s family down based on the names inscribed on the back of the photograph.

Greg Thompson, executive director of the upcoming exhibit at his gallery, favors a photo of an unidentified family.

“I think I connect to that one because that’s where I am in my life right now ... that image is just Americana,” he said. “It’s like [Grant Wood’s painting] American Gothic. ... It’s just a classic American image.”

Carman credits much of the appeal these photos have to their ability to make viewers fantasize about the lives of their subjects.

“I don’t see how anybody with a soul can’t connect with these,” she stressed.

SEE THE EXHIBIT
Disfarmer: Portraits from a Lifetime opens at Greg Thompson Fine Art on Thursday for a private reception. The show will open to the public Friday evening during Argenta ArtWalk and run through May 12. All vintage prints are for sale. A special screening of the documentary Disfarmer: A Portrait of America will take place April 14 at 2 p.m. Admission is free, but seating is limited.