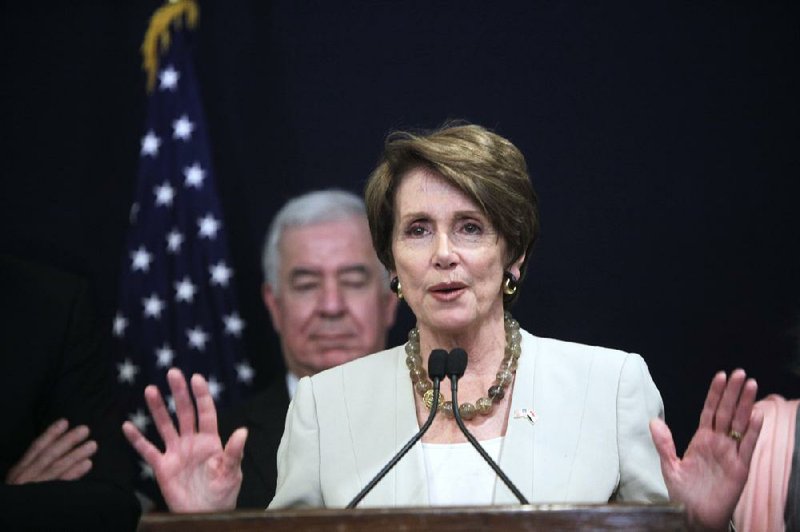 House Minority Leader Nancy Pelosi, who was leading a congressional delegation, said in Cairo that Egypt’s charging of 16 Americans was “a bump in the road” but will not be a barrier to relations.

Relations between Egypt and the U.S. plunged when Egypt charged the 16 Americans and refused to let those in the country leave. American lawmakers threatened to cut more than $1.5 billion in aid to Egypt as the crisis devolved into the worst spat between the longtime allies in years.

The tension was alleviated somewhat when Egypt lifted a travel ban on the Americans, effectively allowing them to leave the country and avoid trial.

But the case is still not closed, and one of the American defendants has decided to remain in Egypt and face trial along with the rest of the Egyptian defendants.

The departure of the Americans has also sparked a row in Egypt. Democracy advocates accused the ruling military council of fabricating the case to attack democracy groups and then later pressuring judicial authorities to let the Americans leave the country.

Pelosi, who is leading a congressional delegation to Cairo, said the case will not be a barrier to relations between the two countries.

“The NGOs [nongovernmental organizations] was a bump in the road,” she told reporters. “We don’t intend to have it stand in the way.”

Pelosi said she received assurances from Tantawi that power will be transferred to a civilian authority once a new president is elected.

Egypt’s presidential election, anticipated to be the first free and fair multicandidate presidential vote in Egypt’s history, is set for May 23-24. The new president will be announced on June 21.

Many democracy advocates and revolutionary youth are skeptical that the ruling military council will fully withdraw from politics.

Egypt’s military generals took power after the ouster of longtime ruler Hosni Mubarak, who stepped down after an 18-day mass uprising. But the generals have been criticized for failing to restore security, pushing back the date they will shift to a civilian government and for human-rights abuses committed during their tenure.

Many Egyptians accuse police of looking the other way while violent crime has spiked in the year since Mubarak’s ouster. But the charges in the Port Said riot went a step further, alleging the police actually aided the perpetrators of the world’s worst soccer-related disaster in 15 years.

The nine officers, who include six generals and a colonel, were in custody.

In all, 75 people were charged Thursday in connection with the carnage, more than 60 of them fans.

Information for this article was contributed by Hamza Hendawi of The Associated Press.