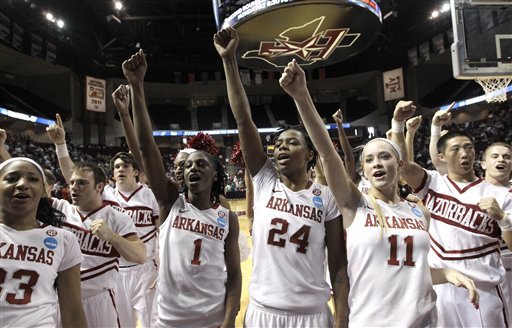 COLLEGE STATION, Texas — Arkansas' defense clamped down and knocked Dayton out of the NCAA tournament.

C'eira Ricketts had 13 points and five assists for the sixth-seeded Razorbacks (24-8), who finished the game with a 20-2 run after trailing by as many as 14 in the first half.

Andrea Hoover scored 16 and Justine Raterman added 14 for the No. 11-seeded Flyers (23-7), who went the final 12 minutes without a field goal, missing their final 15 shot attempts.

Dayton shot 24 percent (7 for 29) from the field in the second half against the Razorbacks' 10th-ranked scoring defense. Arkansas also outrebounded the Flyers 47-37 for the game.

The Razorbacks were the ones having shooting problems at the start, missing 10 of their first 11 attempts. But they started attacking the basket to rally late in the first half.

Sarah Watkins, Arkansas' 6-foot-3 center, scored inside and converted a three-point play at the start of a 19-5 spurt. The speedy Peak drove for two layups during the run, and Ricketts' free throws in the final minute before the break tied the game at 35-35.

Arkansas went straight to Watkins on the first play of the second half, and she muscled inside to give the Razorbacks their first lead. Harris followed with a 3-pointer, but then fell hard on her back trying to guard Casey Nance. Harris returned to the game a few minutes later.

Hoover hit a 3-pointer and Raterman sank a pair of jumpers to put Dayton back in front. Ricketts answered with a pull-up jumper, then turned a steal into a fast-break layup.

Arkansas started controlling the boards and wearing down Dayton with its defense to finally pull away. Another offensive rebound led to Williams' jumper from the baseline, and Harris' 3-pointer with 7:09 remaining put Arkansas up 63-53.

Arkansas went to full-court pressure early in the game, but Dayton point guard Patrice Lalor handled it well and Samantha Mackey's 3-pointer with 12:30 left in the first half put the Flyers up 18-7.

Dayton's lead swelled to 30-16 as the Flyers continued to find cracks in Arkansas' defense.