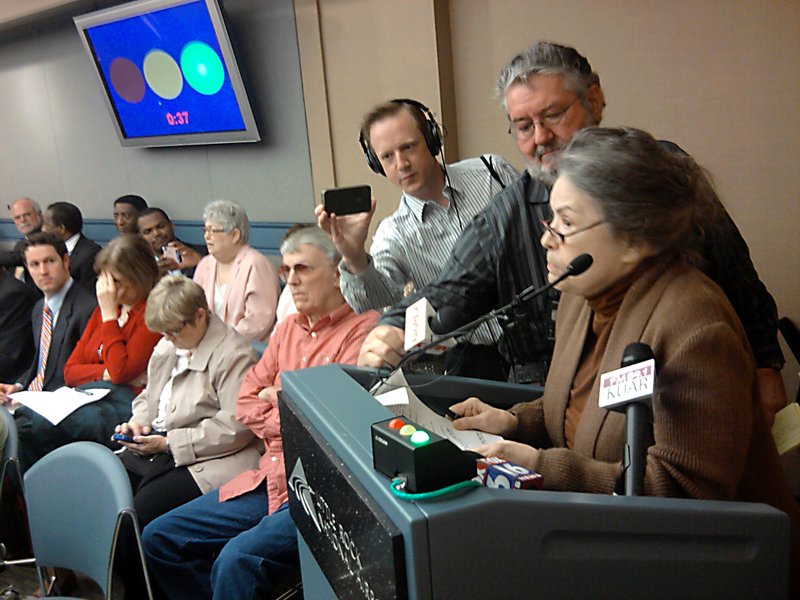 Margaret Piper speaks to the Airport Commission, urging it not to rename Little Rock National Airport after the Clintons.

Bill Clinton, in a statement released by his presidential center, said he and Hillary were "humbled" by the vote.

"We are grateful for this honor and for all that the people of Arkansas have done for us," Bill Clinton said. "And we look forward to many happy landings at the airport in the years ahead."

"What an example of bipartisanship," Dailey said, adding later that the airport hopes the name change will have a real impact: "Our goal is that this will further embrace our relationship with the Clintons to the extent that they will continue to do what they are doing by bringing speakers and world attention through the Clinton public service school, continuing to bring more visitors here to the Clinton Presidential Center and bring more economic benefit to the state."

Feedback on the proposed name change was varied before the commission took action and Dailey said he heard from many people who couldn't make the meeting. One man from out-of-state vowed to try and avoid landing in Little Rock if its airport was named for the Clintons, Dailey said.

Arkansas Speaker of the House-designate Darrin Williams, one of about a dozen people who spoke in 3-minute allotments, supported the change because he said everyone should be proud of an Arkansan who became president and a First Lady who became senator and secretary of state.

Those against the change included Margaret Piper and her husband, who spoke against the move, noting various scandals Bill Clinton has been tied to. They accused the board of trying to pass the measure in secret.

"The Clintons left Arkansas," she said at one point. "Get over it."

Another man said he supported the airport being named after Bill Clinton, but said the joint name was "a little too backwoods and countrified." He guessed people would start referring to the airport as the Hillbilly airport by combining the names.