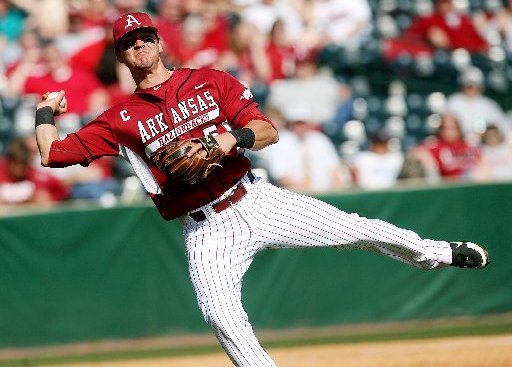 Matt Reynolds went 3-for-5 with 2 RBIs in the Razorbacks' 7-6 win over South Carolina on Sunday.

FAYETTEVILLE — After its offense stalled late in a Friday night collapse, Arkansas was determined not to let its bats fail again Saturday.

The Razorbacks recorded 17 hits - one shy of a season-high - and beat South Carolina 7-6 at Baum Stadium, snapping a 12-game conference win streak for the Gamecocks and atoning for a blown six-run lead the night before.

Arkansas (34-14, 12-11 SEC) overcame two separate South Carolina leads to tie the weekend series. The Razorbacks took the lead for good on a Jacob Morris RBI single in the bottom of the sixth and extended the lead to 6-4 on a Tim Carver single in the next at-bat.

"We just kept putting the ball in play, and some balls found some holes," Arkansas coach Dave Van Horn said.

"We had guys that were recycling out of the bullpen that came to us, and said, 'We’re ready to go; we can all go an inning.’ I mean, it was just a great team effort - one of the best I’ve been involved in a long, long time."

After South Carolina pulled within 6-5 on a Brison Celek pinch-hit RBI in the top of the eighth, Arkansas added an insurance run on Matt Reynolds' two-out RBI single in the bottom of the inning.

Reynolds finished the game 3-for-5 with 2 RBIs, and reached base for the 31st consecutive game.

“Matt was a little frustrated with the way it went last week for about a 10-day stretch there," Van Horn said. "He just comes early, works hard, works on his own, gets with coaches out of practice, just wants to continue to get better. He kind of plays the game a little bit like a professional.

"That hit that he got in the eighth was huge."

Much of Arkansas' damage came from unlikely sources, with Bo Bigham, Derrick Bleeker and Matt Vinson combining for seven hits batting fifth through seventh in the Razorbacks' batting order.

Making his first start since April 14, Vinson recorded doubles in his first two at-bats. His second hit gave Arkansas a 3-2 fourth inning lead after South Carolina tied the game on a Christian Walker home run to leadoff the top of the inning.

"I didn't know I was starting until I walked into the stadium today and someone told me," Vinson said. "I saw it and had to do my job.

"I always want to play. To see my name in the lineup was an awesome feeling."

The Gamecocks (35-12, 15-8) took the lead in the top of the fifth, starting with a Chase Vergason solo home run to leadoff the inning. Walker followed with a two-out RBI single to give South Carolina a 4-3 advantage.

Reynolds' first RBI hit scored Carver in the bottom of the inning to tie the game 4-4.

“They did a good job of hitting today," South Carolina coach Ray Tanner said. "They do a good job of using the whole field and they were tremendously effective today. We hung around and kept battling into a situation where we had a chance to tie the game late and win it, but they had a great offensive day and were better than us.”

Arkansas' bullpen logged 6 2/3 innings of relief Saturday after Randall Fant failed to make it out of the third inning.

Tyler Wright earned the win by pitching 1 2/3 innings after taking over for Brandon Moore in the sixth. Wright picked off a runner at third in the inning and stranded two more in the seventh.

"He made an inside move with runners on first and second with one out, and it just shows his baseball IQ," Reynolds said of Wright. "Everyone knows that you need to do an inside count with two strikes because the runners might be on the move. He did that and made a great play."

South Carolina starter Jordan Montgomery suffered his first loss of the year, allowing five runs on nine hits in 5 1/3 innings. Barrett Astin picked up his ninth save for the Razorbacks.

The two teams will play again Sunday with a first pitch scheduled for 1:05 p.m. Junior right-hander DJ Baxendale will start on the mound for the Razorbacks, while the Gamecocks have yet to designate a starting pitcher.