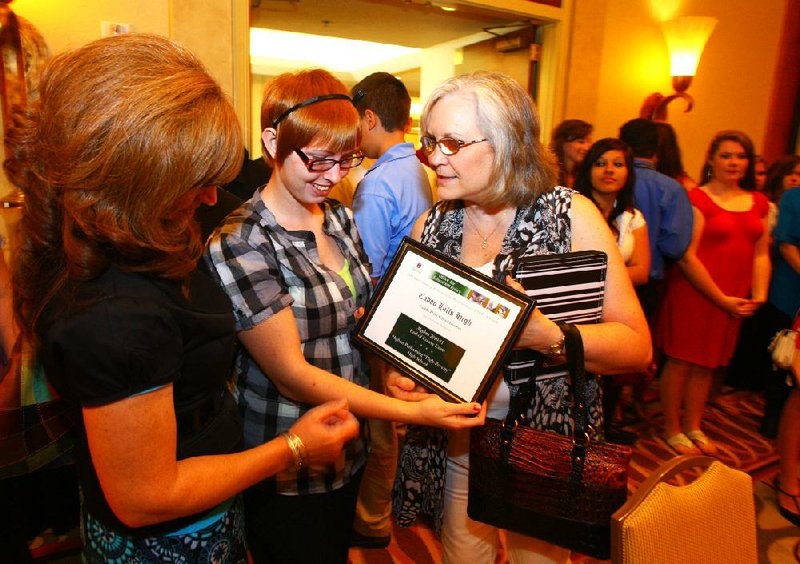 LITTLE ROCK — An executive for the Khan Academy, a nonprofit organization that provides more than 3,200 video lessons in math, science and other academic subjects, said Thursday that the online system enables students of all ages to view lessons repeatedly without embarrassment.

“That is very, very powerful,” said Sundar Subbarayan, who leads the California based organization’s efforts to incorporate the use of its free lessons and other resources into schools.

Subbarayan added that by watching the videos - even if one lesson is viewed multiple times - “not once are you going to be judged as stupid or not stupid.”

Subbarayan described the academy’s program, which can be used by an individual student at home or integrated into a classroom’s instructional program in a way that a teacher can monitor each student’s grasp of the material, at a one-day conference in Little Rock titled Using Technology to Improve Student Achievement.

About 100 people, including educators from general and higher education, as well as business leaders, attended the conference at the Peabody Little Rock hotel.

The event was sponsored by the Office for Education Policy at the University of Arkansas at Fayetteville. Also speaking were Bevil Wooding, founding director of the BrightPath Foundation that helps young people develop applications and digital content to serve local community needs, as well as Arkansas educators and policymakers with interest in how technology can be used in education.

The Khan Academy was started by Salman Khan, a New Orleans native and graduate of the Massachusetts Institute of Technology, who initially provided online tutoring to his family and friends. In response to the popularity of those lessons, Khan quit his job as a hedge-fund analyst to concentrate on the tutorials.

The online lessons eventually caught the attention of Bill Gates’ family. The Bill and Melinda Gates Foundation and Google are among the academy’s financial backers. Khan was featured in March on the CBS news show 60 Minutes.

The Khan Academy’s 3,200 video lessons have been watched more than 150 million times, mostly in the United States but also in about 200 other countries, Subbarayan said. There have been nearly 50 million “unique” viewers, meaning individuals who viewed the lessons one or more times.

Arkansans are included in those numbers, Subbarayan said. There were 30,000 Arkansas viewers in April, coming from Pulaski, Washington and Craighead county area school districts, as well as places such as Russellville, Fort Smith, Texarkana, El Dorado, Harrison, Flippin and Mountain Home. The April count was up from 25,000 Arkansas viewers in January.

The video lessons that are largely taught by Khan can be as short as a couple of minutes and up to 15 or more minutes.

The lessons target students in the elementary grades though the first two years of college. They cover concepts in pre-algebra, algebra, geometry, trigonometry, calculus, linear algebra, statistics and differential equations.

The viewer of a lesson doesn’t see Khan but hears his voice and explanation as the numbers appear on what looks like an old-fashioned blackboard. Accompanying some of the videos are exercises - about 350 to date - that enable the viewer to practice on the computer the material just taught.

The exercise provides a series of “hints” to help the viewer through the problem or the opportunity to see the video again. Successful completion of an exercise can result in the reward of points - which take the form of leaves - for the viewer who logs into the Khan Academy and returns repeatedly as a recognized viewer. Registering as a viewer is not required to use the website, however.

One of the tenets of the company is “Reach the learner wherever they are,” Subbarayan said.

Almost 500,000 students are using Khan Academy lessons in classrooms nationally, Subbarayan said. About 2,000 schools are employing the program, including 25 pilot schools that the organization is working with directly as a way to determine how to make its programs more effective.

“Just to be clear, we don’t have to be working very closely with you for you to use Khan Academy,” he told the educators adding that there is “teacher toolkit” and other detailed resources for teachers on the organization’s website: khanacademy.org.

Khan Academy currently has about 25 employees, 22 of whom are engineers. As recently as November 2010, the organization had just two employees, Subbarayan said.

All the lessons and resources for educators are free to the users, he said, and the hope is the organization will never have to charge fees.

The company’s motto is “A free world class education for anyone, anywhere.”

Members of the Little Rock Central High faculty who attended the conference Thursday said they were previously familiar with the Khan Academy but welcomed information about features that enable teachers to monitor students for mastery of the lessons.

“A couple of our teachers are already using the Khan Academy,” Central High math coach Tonjuna Iverson said. “As a coach I can take this back to the whole department and show them how they can enhance what they are already doing in their classrooms as well as use it to remediate the students who are not on grade level.”

Tina Hayley, Central High literacy coach, admired the fact that the Khan Academy has incorporated “game theory” in its program so that students who progress in their math skills are rewarded.

“They are trying to incorporate all those best practices and known strategies that are really going to engage our students,” Hayley said of the organization.