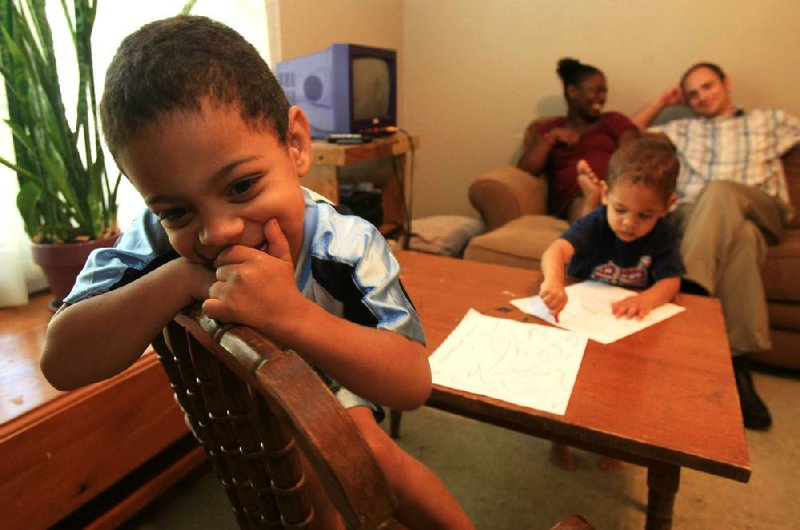 Samuel Duncan (left), 4, plays at home Wednesday with brother Benjamin, 2. Parents Jessi and Braden Duncan (background) thought they had Samuel’s school picked out until their faith complicated their plans.

He had visited the campus and recognized the playground when the family drove by on Cantrell Road in west Little Rock. Samuel liked to point at the swings and slide, and he talked about going to school there.

But he won’t be, school officials said this week.

Samuel’s parents are Mormons, and the school no longer allows members of the Mormon church to attend the 35-year-old academy.

Samuel’s father, Braden, a graduate student at the University of Arkansas at Little Rock, disagrees with the decision.

School officials said it has been their practice since the school’s founding in 1977 to exclude Mormons, though that ban wasn’t always enforced.

In recent years, school officials have been more vigilant about keeping Mormons out.

The debate about whether Mormons are Christians has gone on since Joseph Smith organized the church in upstate New York in 1829.

Little Rock Christian Academy officials say they’re not — or at least not Christian enough to conform to the school’s doctrinal statement — which it uses to bar Mormon students from attending.

The school’s policy, formalized nearly five years ago, frustrates some Mormon families who insist that they are Christians. Their children should be allowed to attend a school that emphasizes strong morals and rigorous academics, they say.

Officials at the school — which serves students from age 3 through 12th grade — are standing firm.

“It doesn’t mean we can’t be great citizens with everybody in town,” said Gary Arnold, the school’s director. “Their doctrine doesn’t align with our doctrine. But I do know that the Mormon faith is not regarded to be in the historic, orthodox stream of Christianity.”

The Church of Jesus Christ of Latter-day Saints leaders acknowledge that the private school, which doesn’t accept federal funding, can deny admission to members of their flock.

But, they argue, Christians should stand together in the face of an increasingly secular world.

Whether Mormons are Christians has repercussions beyond the 1,400-student school, which admits dozens of Protestant denominations as well as Catholics. The question has become a recurring topic in Republican presidential nominee Mitt Romney’s campaign.

Reservations among evangelical Christians about Romney’s Mormonism seem to have abated in recent weeks as the former Massachusetts governor wrapped up the GOP nomination, but the issue is likely to resurface before November.

Romney addressed the dispute in a recent speech at Liberty University in Lynchburg, Va., after paying tribute to that school’s founder, the late-televangelist Jerry Falwell.

“People of different faiths, like yours and mine, sometimes wonder where we can meet in common purpose, when there are so many differences in creed and theology,” he told a predominantly evangelical audience. “Surely the answer is that we can meet in service, in shared moral convictions about our nation stemming from a common world view.”

“I feel we’re being discriminated against,” said Jessi Duncan. “But I don’t feel like it’s a campus-wide issue. I feel like it’s just some people in the administration. Others are just ill-informed. They think we’re polygamists, and the women wear petticoats and bonnets.”

School officials, in interviews and in e-mails obtained by the Arkansas Democrat-Gazette, said the Duncans refused to say they agreed with parts of the school’s doctrinal statement. It reflects a traditional Protestant-Catholic-Orthodox understanding of the Trinity. It also states that only the 66 books contained in the Protestant Bible are authoritative scriptures.

Carla Emanuel, a school board member, said she’s concerned that allowing Mormon students into the school would be a mistake.

“It’s very, very sneaky when people come in, especially in elementary and junior high grades where the kids are very influenced. It’s frightening how quickly things can get turned around,” she said. “They are called to do that, which is fine. But then start a Mormon school,” she said.

Other current or recent board members, including former Alltel Chairman Scott Ford and Conway pastor Harry Li, declined to comment.

The Duncans said they offered to sign a statement promising that they wouldn’t proselytize, but it didn’t change the school’s position.

The school’s admission committee told the Duncans on Tuesday that it would enforce the school’s policy against Mormons.

Mormon leaders accept the decision, said Michael Beheshti, president of the Little Rock Stake, which is similar in size to a small diocese and incorporates Mormon churches over large parts of eastern Arkansas up to the Missouri border.

“One of the articles of our faith is that we wish the privilege to worship according to our faith and we wish to accord all men that same privilege,” Beheshti said.

Beheshti wasn’t allowed to attend Tuesday’s meeting, but he met briefly with school officials. He said they told him that students from many different Christian denominations attend the school.

“I hope this criteria is applied evenly to members of all faiths. We wonder if everyone conforms to that doctrinal statement,” he said.

Braden Duncan said he didn’t understand why Catholics, whose scriptural canon includes the apocrypha, are allowed to attend the school.

Catholicism is a historical Christian denomination that regards revelations to be closed, Arnold said.

Doctrinal differences aside, another Mormon family whose child was denied admission to the Little Rock Christian Academy said the personal effect of the school’s policy is damaging to Mormon children.

Mormon Carolyn Hiatt said she sent her son to the school about eight years ago and faced no discrimination.

So she didn’t foresee any problems when two years ago, her then-15-year-old daughter wanted to go to the school because several of her friends were planning to go there.

When the daughter found out she wouldn’t be allowed to go, it was a shock, said Hiatt.

“She was heartbroken. She was devastated. She cried. It was an awful month or so,” said Hiatt.

Originally from Washington state, Hiatt has lived in Little Rock for 20 years and said she loves it. But the school’s rejection made the family consider moving out of state.

“People generally have good intentions, but they’re taught this growing up, they have these ideas. They think Mormons are a cult,” Hiatt said.

She remembered a pastor who told her friend that her 3-year-old child shouldn’t play with Hiatt’s son because “Mormons were an evil influence.”

Hiatt’s oldest son attended Little Rock Christian Academy for one year as an eighthgrader about eight years ago, she said. At the time, the school had no official policy excluding Mormons, she said. That written policy was put in place in 2007-08.

The policy, “adopted new admission criteria ... to make it clear that our school mission is to partner with families and churches who subscribe to our LRCA Doctrinal Statement,” Arnold said in an e-mail.

A Pew Research Center poll of 2,001 U.S. adults in November showed that onethird of non-Mormons don’t believe that Mormonism is Christian, and nearly twothirds don’t know much about the religion.

The poll, which had a 3 percent margin of error, also found that 53 percent of evangelical Christians don’t consider Mormonism a Christian religion.

Emanuel, the board member, said the nation’s 6.1 million Mormons’ salvation is suspect, adding: “I don’t believe they’ll go to heaven.”

Federal law doesn’t prohibit private religious schools from discriminating on the basis of religion as long as they don’t accept federal dollars.

“It is a private school. We can do what we want,” Emanuel said.