Bitten by the love bug 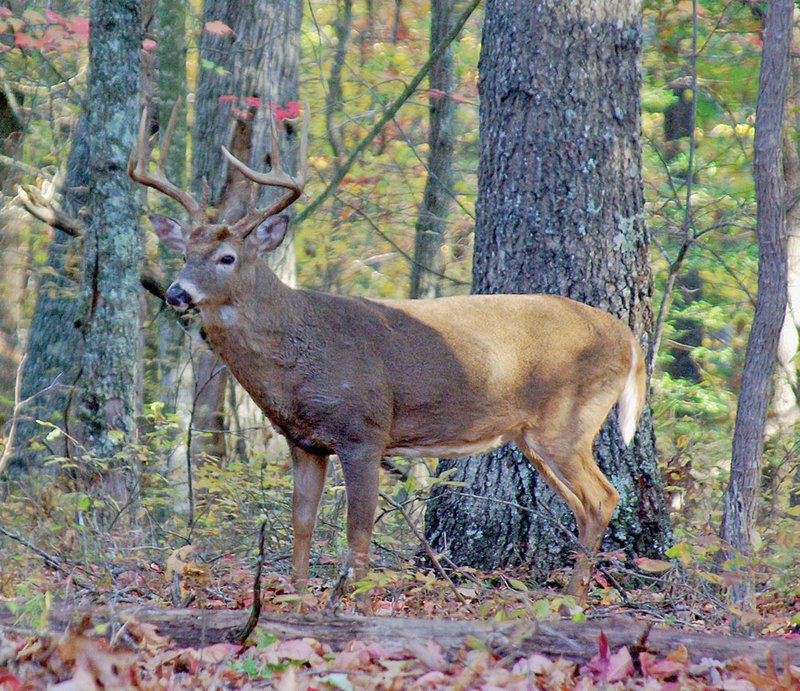 Big bucks like this lose much of their wariness during the peak rutting season, when their attention is focused on breeding does.

A friend recently told me about an amazing event that occurred while he was hunting in the Ouachita Mountains. From his stand, he saw five bucks pursuing a single doe. The bucks seemed completely spellbound.

Taking advantage of his good fortune, the hunter fired two shots and killed two bucks. What happened then seemed unbelievable.

The doe circled through the woods with her remaining three suitors in close pursuit. All four deer reappeared just 20 yards from the hunter’s stand. Desperate for female companionship, the bucks were oblivious to the threat of death.

This is an extreme example of unusual rutting behavior, but it illustrates the fact that a buck looking for a mate changes his behavior, often dramatically, thereby increasing the hunter’s chance of bagging a trophy. A rutting buck is most likely to make mistakes.

Nevertheless, this vital part of a whitetail’s life cycle is shrouded in misunderstanding. Let’s examine facts about the rut in Arkansas and find out how to make this special time work for you.

Steve N. Wilson, former director of the Arkansas Game and Fish Commission, studied the reproductive biology of Arkansas deer while he was a graduate student at the University of Arkansas. He’s an expert on the topic of the whitetail rutting season.

“An understanding of the basic biology of rutting deer can make someone a much better hunter,” he said. “It makes a difference in the deer hunter’s attitude. If I know how a deer will react under certain circumstances, I’m more willing to sit in a stand longer, and consequently, my chances for success are greater.”

To understand rutting behavior, a hunter must learn which factors set the rut in motion and the time of year this occurs. Misconceptions abound. Some hunters think changing weather initiates rutting behavior. Others believe moon phases are responsible.

In reality, the rutting season is tied to photoperiodism, or light periods. The rut’s onset is determined by the days getting shorter. Decreasing daylight signals the buck’s glands to produce male hormones that initiate breeding. Genetics and nutrition have some minor influence.

Because day lengths shorten first in northern latitudes, the rut begins first in northern areas and progresses southward, a fact borne out by the results of the four-year deer reproduction study published by Steve Wilson and John Sealander. These biologists knew from previous studies that whitetail breeding activity starts first in bucks, and they are sexually active longer than does. Wilson and Sealander’s study concentrated on determining precise estimates of conception and fawning dates by analyzing reproductive systems of harvested does and determining mean conception dates in northern, central and southern Arkansas. According to Wilson, the mean conception dates the men determined coincide with the rut’s peak in each region.

The rut peaked Nov. 13 in north Arkansas, which includes the Ozark Mountain region and the northern Delta. The entire range of breeding (earliest and latest conception dates) was Oct. 21 to Dec. 17.

The rut’s peak in central Arkansas, primarily the Ouachita Mountains and the central Delta, occurred Dec. 9, almost four weeks later than in the north. Bucks in this area bred does from Nov. 2 to Jan. 1.

In the Gulf Coastal Plain and southern Delta in southern Arkansas, findings were similar to the central area. The rut peaked Dec. 5, but conception dates ranged from Oct. 25 to Feb. 6.

The breeding period increases from north to south. Breeding occurs for at least 57 days in the north, 60 days in central Arkansas and 73 days in the south. Add to this the fact that bucks are in the rut four to six weeks before they begin courting receptive does, and for a similar period after the actual breeding season, and you can see that the actual rut extends over an even greater period.

Although rutting dates given are typical for an “average” year in Arkansas, factors such as weather can influence rutting activity. For example, Wilson said that when bucks are fully in the rut, a cold snap can trigger increased buck activity. Likewise, a period of unseasonably warm weather can almost halt rutting activity.

Some Arkansas deer hunters believe rutting bucks are constantly moving, often traveling many miles in pursuit of receptive does. It is true that bucks move considerably more during the rut, but most movement is confined to a buck’s established home range, an area usually only 150 to 500 acres in size. Where deer densities are high, home ranges are generally smaller. Where densities are lower, home range size increases.

What does this mean to the hunter? For those who hunt in high-deer-density areas, the chances of bagging a rutting buck are probably greater because that buck will visit the same area more often as a result of the smaller size of his home range. Of course, whether you shoot one depends on your discovery of the area he is most likely to visit — usually a scrape.

Look for scrapes near established trails, particularly along ridge tops, logging roads and streamside flats, and adjacent to fences through wooded tracts. In these locations, a line of frayed rubbing trees is a clue not only to a buck’s whereabouts, but also to the whereabouts of his scrapes.

Often found just a few feet from a scrape, a rubbing tree, or just “rub,” is a sapling used by a buck to polish his antlers and mark his home range. The bark usually is scarred 1 to 4 feet from the ground. Rubs are most concentrated where a buck’s private trail meets the main trail used by several deer. Usually, the larger the rubbing tree’s diameter, the larger the buck that made it.

Some rubs are rarely used, so try to make your stand downwind from a rub and a scrape in proximity, a place a buck will surely revisit. A buck generally returns to his scrape at least once daily, hoping to find a willing doe, but exactly when and how often he’ll show up is unpredictable. Night is his favorite time, but he may make rounds at dawn, dusk or even during midday hours. So be on your stand early, and stay throughout the day.

Steve Wilson said hunting success is a product of dedication, not chance. It does not bestow itself on those who merely wish for it.

If you want to bag a buck, he said, learn his habits. That is the foundation essential to consistent deer-hunting success, and that is why hunters who understand rutting behavior kill more whitetails.