LSU sends Hogs out with a thud 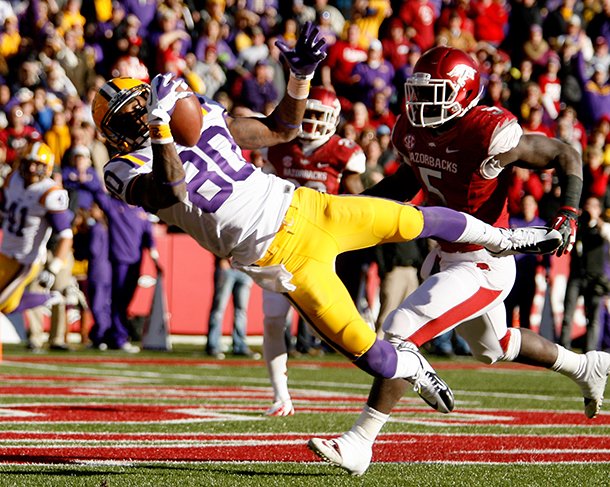 FAYETTEVILLE — In a series full of unpredictable outcomes, LSU avoided another and came out as predicted Friday at Donald. W. Reynolds Razorback Stadium.

The No. 7 Tigers beat Arkansas 20-13 to keep their slight hopes of a Southeastern Conference championship alive. LSU needs wins from Auburn and Texas A&M on Saturday to win the SEC West and advance to Atlanta for the second consecutive year.

Arkansas gave the Tigers all they could handle in the final game of the season. After trailing by 10 points at halftime, the Razorbacks pulled within 17-13 in the fourth quarter on a 17-yard field goal by John Henson, who replaced starter Zach Hocker after a pair of first half misses.

Henson's second field goal came with the ball at the LSU 1. Arkansas (4-8, 2-6 SEC) opted for the kick instead of a fourth down attempt at the end zone to potentially tie the game.

The Razorbacks advanced into LSU territory twice more in the fourth quarter, but had no additional points to show. Tyler Wilson led Arkansas 60 yards in the game's final minute to the LSU 18, but a final pass to the end zone fell incomplete as the game ended.

LSU (10-2, 6-2) used a pair of turnovers on Arkansas' first two drives and capitalized on an untimely penalty to shut down the Razorbacks in the first half and take a 10-0 lead at halftime.

Arkansas advanced to the LSU 2 on the first drive, but lost the ball on a Dennis Johnson fumble. Wilson threw an interception on the first play of the next drive.

LSU capitalized on the Wilson interception with a 49-yard field goal by Drew Alleman and added a touchdown in the second quarter on a 22-yard pass from Zach Mettenberger to Jarvis Landry. The Tigers were aided on the touchdown drive by an unsportsmanlike conduct penalty on the Razorbacks' bench - the team's second in as many games - during a timeout before a third down play.

Arkansas pulled within 10-3 on Henson's first field goal in the third quarter, but Michael Ford's 87-yard kickoff return on the ensuing play set up the Tigers' second touchdown, a 1-yard run by Jeremy Hill with 9:03 left in the period.

The Razorbacks scored their only touchdown with 5:52 left in the third quarter on a 28-yard touchdown pass from Wilson to Mekale McKay. Wilson, a redshirt senior, broke the school's career passing yards record in his final game.

LSU won the rivalry game for the second consecutive season and third time in four years. The game was played in Fayetteville for the first time since 1992.