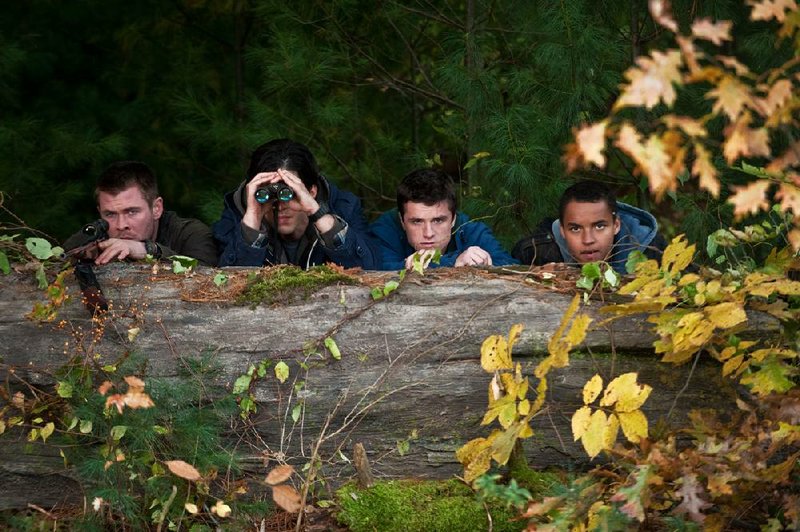 LITTLE ROCK — In the immediate aftermath of a particularly grisly presidential election season - one that saw red and blue states bloodied and battered in the process - you’ll be glad to hear Hollywood thinks they’ve found a potent healing balm. They’ve determined what this country really needs to restore our faith in one another is a good ol’ jingo party beat-down flick, even if it’s in the form of a remake of Red Dawn, a John Milius piece of claptrap from 1984.

The basic premise concerns an invasion of a foreign army into the stately Washington city of Spokane, and the group of young people who escape and raise havoc for the invading army with a ragtag guerrilla force known as the “Wolverines.”

There’s one minor problem, however: In the original, as you might ascertain from the title, the invading hordes are from the Soviet Union, so what nefarious nation could be a suitable stand in for the Rooskies? The choice here is North Korea, somehow still backed by the Russians - not so fast, Ivan! - but that’s only because a Middle Eastern terrorist super-cell wouldn’t ever try to build a fort out of a high school football stadium.

Led by Jed (Chris Hemsworth), a charismatic Marine on leave, and his more immature younger brother, Matt (Josh Peck), the group also includes, among others, Robert (Josh Hutcherson), a techno-nerd who learns in the course of things how to kill a deer and build a bomb trigger; Daryl(Connor Cruise), Robert’s equally geeky best friend; and Erica and Toni, beautiful love interests for Jed and Matt (Isabel Lucas and Adrianne Palicki, respectively). The squadron trains out in the woods and infiltrates the enemy strongholds seemingly at will, shooting up the place, blowing up things, and consistently evading capture, to the growing consternation of Capt. Lo (Will Yun Lee), who begins to feel the heat from his higher-ups.

The film is essentially a fantasy for fervent Second Amendment true believers, filled with scenes of Americans kicking rear ends and fighting for their freedom, even as the writers seek desperately to avoid having to answer many of the obvious questions this invasion might suggest - such as how a giant military force from North Korea ever made it to American shores without any detection whatsoever (we’re vaguely told of a giant super-weapon electric-pulse device that shut down all the nation’s computers); where the standing military forces are in all of this fracas (a small contingent of Marines eventually comes into the picture but only after weeks and weeks have passed); and, frankly, what the North Koreans hope to gain from their clearly suicidal mission in the first place. Do they want our natural resources? Our women? Exclusive access to our Wal-Mart Supercenters?

Save max-villain Capt. Lo, none of the other evil North Koreans are given enough screen time to make much of an impression. They are a nameless, faceless enemy, with no particular agenda, and a complete inability to shoot straight when attacked by a group of freedom-fighter teens.

Worse yet, the film falls prey to the most standard lexicon of action-movie motifs: The team survives intact through hails of gunfire, strafing and bombing; a group of teenage bumblers is somehow transformed into an elite fighting force in a matter of days; the team is always on hand at the perfect moment to save worthy Americans; and the few minority members of the crew are the first to go down when things get really rough.

It also doesn’t help that beyond the untouchably charismatic Hemsworth (actually an Aussie, but who’s counting?) and the dutiful Hutcherson (who has had plenty of practice running through the woods being pursued by enemies recently), the cast is pretty much unconvincing, none worse than the ever smirking Peck, whose dark, weaselly countenance brings to mind a dislikable character from an entirely different movie and is about as credible as a brother to the blonde, big shouldered Hemsworth as Desi Arnaz.

Still, I suspect the director, Dan Bradley - known before this excursion primarily as a well-regarded stuntman - and his production staff know all too well the types of folks whom this little war fantasy might appeal to, and they shamelessly play to their expected audience. As Jed first assembles his ragtag troops, he galvanizes them with an ode to homesteaders everywhere: “This isn’t just some place for us,” he intones with fury. “This is our home.”

And who knows? Maybe the real message here is that the only way this country will ever be united again is if a foreign aggressor comes here and tries to take all of our stuff. The sad truth is, they’re probably on the right track.