At a theater near you 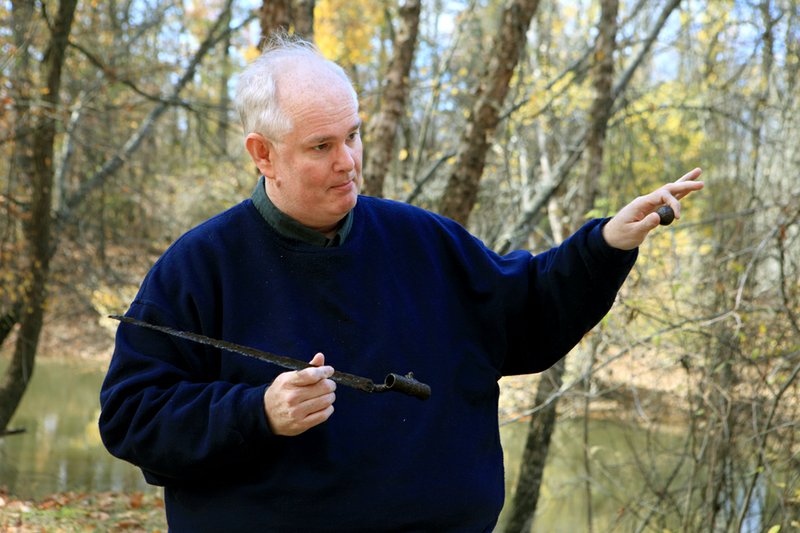 Joe Walker, author of Harvest of Death: The Battle of Jenkins’ Ferry, Arkansas, talks about the battle near the site where the Union Army crossed the Saline River. The battle is featured in the opening scene of Lincoln.

SHERIDAN — The movie Lincoln, now attracting crowds across the country, begins with a violent Civil War battle, set on marshy ground during a heavy rain.

In the fighting, African-American Union soldiers ferociously kill Confederate soldiers who are trying to surrender.

The scene, depicted in the movie, portrays an attack during the Battle of Jenkins Ferry, along the Saline River in April of 1864, in what is now Grant County.

Joe Walker, author of Harvest of Death: The Battle of Jenkins’ Ferry, Arkansas, said the scene in the movie is historically accurate.

“It was during a hard rain,” Walker said. “One Union officer wrote that he had never seen it rain so heavy before in his life. The Saline River was filled up to the full height of the banks so that the Confederate forces caught up with the Union Army as it was slowly crossing the river on a pontoon bridge.”

Jenkins Ferry Battleground State Park is at the site of the pontoon-bridge crossing southwest of Sheridan. Visitors can still see where soldiers dug into the banks on both sides so that the temporary bridge, resting on boats, could be anchored.

“Imagine there were 15,000 men standing around on this spot and across the river in a terrible storm, trying to get horses and wagons over the bridge,” Walker said, standing along the slope to the river on a quiet Friday morning.

The part of the battle shown in the movie Lincoln was at the end of an encounter in a soggy cornfield between the 2nd Colored Kansas Infantry, commanded by Col. Samuel Crawford, and members of two Confederate artillery batteries under the command of Lt. John Lockart.

The two batteries, each with about 12 cannons, were moved across the cornfield to slow the Union assault.

What was about to happen, Walker said, began with a clash between the 1st Colored Infantry and Southern troops near Camden on April 15, in an area known as Poison Springs.

A Confederate assault overwhelmed the Kansans. No black troops were captured, and those left wounded on the battlefield were killed, scalped and stripped.

The Confederate forces were fighting under the “Black Flag,” meaning they would take no African-American prisoners or spare any wounded.

Days later, a newspaper in Arkansas justified the action, declaring, “We cannot treat Negroes taken in arms as prisoners of war without the destruction of the social system for which we contend.”

As the 2nd Kansas Colored crossed the muddy field of knee-high corn, the cannons fired on the soldiers with canister shot.

“Canister is a can or bag filled with these,” Walker said, taking from his pocket an oval-shaped ball of iron, almost an inch wide. “The shot, along with nails and other pieces of metal, would go through the oncoming soldiers like a huge shotgun blast.”

After the cannons has fired a round, Col. Crawford ordered his men to fix bayonets and charge.

Again from a pocket, Walker drew a bayonet more than a foot long. He pointed to how the blade was shaped like a solid triangle.

“The Civil War bayonet was a French invention,” he said. “With three sides on the blade, the wound would not close. This type of bayonet was outlawed before World War I.”

A third of the way across the field, the Kansas unit fired, killing the horses used to move three of the guns and scattering the other animals. With a cry of “Poison Springs,” the African-American troops overran the batteries and fell upon the 60 or so men with their bayonets.

“As you see in the movie, it was raining, and the mud was about ankle deep, with standing water on the ground,” Walker said. “The fighting was fierce and hand to hand.”

According to Walker’s book, a group of white soldiers from Iowa came in behind the Kansas troops during the fighting around the Confederate guns. The new troops intervened, stopping the fighting.

Confederate doctors who later treated the wounded found near the guns reported what had happened.

“We found many of our wounded had been mutilated in many ways,” states one letter now held by the University of Arkansas. “Some of the ears were cut off, throats cut, and there were knife wounds.”

Lt. Lockart was captured unharmed and taken to Col. Crawford after the engagement.

According to a book written by Crawford years after the war and quoted in Walker’s book, he told the young Confederate officer he would be released.

“You are not a prisoner of war. We do not take prisoners,” Crawford said. “Your president has placed his army under the ‘Black Flag,’ so far as our colored troops and their officers are concerned, and Gen. Price’s troops carried out that order to the letter over there at Poison Springs, the other day.

“We are the 2nd Kansas Colored Infantry. My name is Crawford, and I am colonel of this regiment. You see and know what this regiment has done here today. I am going to send you back through the lines, not as a prisoner of war, but as a messenger of peace. Tell them I accept their new flag and that from this day forward, … I shall simply tell the men to remember Poison Springs.”

As the battle ended and the Union wagons and any soldiers began to make their way to Little Rock, the 2nd Kansas was stayed as the rear guard and were the last to cross the bridge.

Some of the Union wounded were left behind, including some men from the Kansas regiment. They were taken to a field hospital, but some were then shot by Confederate officers, Walker said.

In the movie, two veterans of the 2nd Kansas are talking with President Lincoln at a train station as solders are headed to fighting in Virginia in 1865. They talk with the president about the battle.

According to one review published nationally, the scene introduces the issues facing Lincoln in the last months of the war that move him to work for passage of the 13th Amendment to the U.S. Constitution, outlawing slavery in America.

Walker said the Battle of Jenkins Ferry left a permanent mark on the land.

“About five farms were destroyed, the corn trampled and the soil torn up,” he said. “People just moved away, and no one has lived there again.”

The battlefield is now covered with trees, and Walker said he would not venture into the battle area during deer season.

“There are still two burial trenches out there that have never been touched,” he said. “It has all been reclaimed by nature after what happened.”

Another reminder of the Civil War activity in the area is place names. Grant County, which was formed from out of Saline County, is named for the commanding general of the Union army and later president, Ulysses S. Grant, and the county seat is named for Gen. Philip Sheridan, a major Union commander in the western campaign of the war and cavalry general in Virginia.

The battlefield park beside Arkansas 46 is small and features a few picnic tables and a pavilion, along with a few historic markers.

Some of the markers are based on information gathered in 1961 during the Civil War Centennial. Walker said he found military engineers’ maps that unveiled two additional fields through which the battle raged, including Groom Field, where the Kansans fought.

Walker said he hopes the movie generates more interest in the battle and the park, not only locally, but around the country.

To get to Jenkins Ferry Battleground State Park from Sheridan, take Center Street to South Rose Street, and turn left on Arkansas 46. The battle field is about 12 miles from downtown Sheridan. The park is on the right.